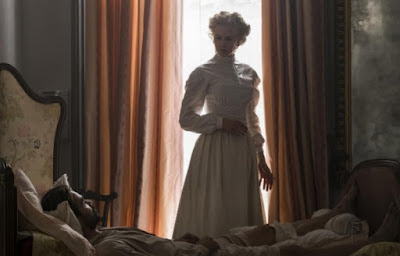 The effect that he has is immediate. It's a change - a charge - in the air, a fear that pulsates through the house, something that at once repels and attracts. He's a volatile presence, a grenade tossed into a room, and yet everyone seems surprised when the situation finally explodes. A hothouse melodrama adapted from the novel of the same name, The Beguiled makes excellent use of Colin Farrell's capacity for soulful villainy and Nicole Kidman's for icy ferocity, but ultimately ends up being slightly less than it perhaps could have been. It's a handsomely mounted film (Philippe Le Sourd's cinematography, in particular, stands out for its atmospheric contribution) and well-acted all around, but it tends to strike symbolic poses more often than it actually uses its narrative to really say anything, resulting in a good movie that never quite reaches greatness.

The man is John McBurney (Farrell), a Union soldier found close to death with a wounded leg in the Virginia woods near an all girls school that has remained in session for the few students who have nowhere else to go while the American Civil War plays out in their backyard. Amy (Oona Laurence), one of the students, brings McBurney back to the school, where the other students debate whether they ought to hand him over to certain death at the hands of the Confederates or allow him to recover sufficiently to give him a chance to live, with the headmistress Martha Farnsworth (Kidman) finally deciding that nursing him back to health would be the Christian thing to do. Yet while he's at their mercy in the sense that they could turn him in and in the sense that he's injured and at a physical disadvantage, he almost immediately takes control of the house by taking control of the imaginations of the women and girls within it. Even when he's locked up in the music room, kept apart from the goings on in the rest of the school and most of its residents, the mere idea of him being in the house changes how everyone else carries herself and how they interact with each other.

A competition takes hold of the household with the older of the women, which includes teacher Edwina (Kirsten Dunst) and student Alicia (Elle Fanning), understanding what it is that they're competing for, while the younger girls have only a vague understanding that having the attention of a man is something that they should value and desire; but McBurney is no simple object of desire. He's fully aware of the effect that he has on the household and while he may not always be actively be trying to set the women against each other (though he is often doing just that, even taking young Amy aside at one point and telling her confidentially that she's his best friend in the house), it's clear that he believes that if he plays things just right, then he won't have to make a choice at all but will instead be allowed to set the terms in which he'll be able to enjoy each of the viable women in turn. What happens next is a matter of him mistaking his greed for what he's entitled to, and the women misunderstanding the extent of his physical vulnerability when combined with the bottomless rage of a man denied.

As a work of ambiance The Beguiled is largely effective, the cinematography playing with the light and shadow of natural lighting in interior scenes and capturing drifting mist in its exterior scenes that gives the setting the feeling of existing in its own world apart (the sound of not too distant cannon fire notwithstanding), and writer/director Sofia Coppola plays up the sexual tensions in the house for all they're worth. The game of psycho-sexual cat and mouse that McBurney and Martha end up playing, with him teasing information out of her and playing on her loneliness and her letting him closer only to immediately pull back, becoming colder to him the warmer he makes her feel, is intriguing and gives Farrell and Kidman some good material to work their respective magic on. The scenes between the two of them easily qualify as the best in the film.

But, for me, The Beguiled ultimately fails to stick the landing in two key ways. The first is that the third act fell pretty flat for me and scenes which should have been full of tension instead left me feeling frustrated. I don't want to spoil the plot so I won't get into specifics, but the peril that the women find themselves in felt manufactured to push them into an extreme victim stance in order to justify what follows as an attempt at self-defense. When what's occurring onscreen prompts multiple instances in which you find yourself asking questions that begin with "why don't they just..." there's a problem. Farrell can be a perfectly menacing presence, but the circumstances of his character as the film presents them at this point balances power in his favor in a way that feels artificial.

The other issue is that while the film is being sold as a feminist reclamation project, retelling a what was once a story of a man stuck in a house full of crazy women from the point of view of the women, once you scratch the surface nothing here goes particularly deep. It's feminist in the manner of, say, Taylor Swift, where it's a marketing angle more than anything and presents a myopic version of feminism that suggests no understanding of the concept of intersectionality. Coppola has been scrutinized for her decision to excise women of color from this story - the novel and earlier film having included a slave character, the novel characterizing Edwina as biracial - and while, having never read the novel or seen the original film, I can't speak precisely to how those characters fit into those earlier versions of the story, I can say that their omission here creates a missed opportunity for complexity. For one thing, if Edwina had remained a biracial character, her unwavering attachment to McBurney might have made more sense and it would have added another dimension to her competition with Alicia for his affections.

For another, the dismissive way that the film acknowledges the existence of slavery ("the slaves left," Amy explains to McBurney, casually tossing it off) casts the women as passive players in the system of white supremacy and serves to excuse their participation in it. To say "the slaves left," simple as that, not only implies that they were on some level complicit in their own enslavement (because, as it turns out, they could just up and leave), but it also implies a powerlessness on the part of white women in the slave-owning south (because they couldn't keep their slaves from leaving) that is disingenuous. A person can be disenfranchised in some ways even as they benefit from the exploitation of people who are disenfranchised in other ways and to pretend that the women in the school house are just bystanders to history (even as they invoke the righteousness of "The Cause") and nothing more only serves to perpetuate a romanticized mythology of the Antebellum south that Hollywood is weirdly invested in despite its reputation (unearned though that may be) as a hotbed for socially progressive attitudes.

Now, granted, I'm not really a Coppola fan generally - The Virgin Suicides did nothing for me, I'm one of the few people who thought Lost in Translation was fine but by no means great, and I never bothered to see Marie Antoinette, Somewhere or The Bling Ring - so I'm not really the ideal audience for The Beguiled, though I went into it with an open mind, having been impressed by the trailers. I came away from it thinking it was a good film, but one which doesn't have the depths necessary to make it a particularly resonant one and one which would prefer not to challenge itself by using its setting to take a complicated view of its characters. It's a fine movie, but it doesn't have the guts necessary to be great.
Posted by Norma Desmond at 8:00 AM