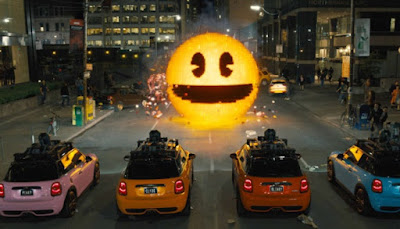 Although Adam Sandler has never been a staple summer movie season - for a long time he was the sort of star who could open a film at any time of the year, so if you look at the release pattern of his films you'll see that his hits have been made in pretty much every season at the box office - when he did make a summer movie, his vehicles were pretty reliable money makers. Between 1999 and 2010 he had 8 summer releases, 7 of which met the $100 million benchmark and most of which exceeded it. The only outlier in that period was 2009's Funny People, whose $50 million gross foretold the drop that Sandler's films were about to take. Since 2010, the only $100 million summer movie Sandler has released has been Grown Ups 2 (perhaps not coincidentally, it's also the only live-action sequel he's ever done), while the rest of his summer movies have been failures of greater and lesser proportions: That's My Boy in 2012, Blended in 2014, and Pixels in 2015. Now, That's My Boy and Blended I've looked at previously in this series and they are both terrible and utterly deserving of failure. But Pixels? I'm actually not so sure.

By and large, Sandler's "Sandlieriest" movies tend to be built around him acting like a cranky, obnoxious asshole and those movies framing that behavior as if it's charming and deserving of reward. Pixels actually adopts a different strategy, making Sandler's character a perfectly decent, perfectly nice guy and in turn Sandler eschews his tendency to dial it up to 10 in terms of being insufferable (though what this results in, ultimately, is Sandler just sort of showing up). His character is Sam Brenner who, as a teen in 1982, came in second in an arcade game championship which was filmed and placed in a time capsule that was then launched into space by NASA. 33 years later Sam is a technician who installs home theater systems, his childhood friend, Will (Kevin James), is the President, and aliens have come to Earth having viewed the footage from the time capsule and interpreted it as an invitation to war. Now they're attacking Earth through old video games and only Sam and his challengers from that long-ago arcade game championship - Ludlow (Josh Gad) and Eddie Plant (Peter Dinklage) - have what it takes to save the world.

On the face of it, the premise alone should have been enough to make Pixels a hit. We're a backwards looking culture, constantly dredging up the artifacts of the past in order to celebrate them and bask in the glow of nostalgia. What was the biggest movie of the summer of 2015? Jurassic World, a film which probably didn't go more than 3 scenes without a direct call-back to Jurassic Park. We like the past better than the present, probably because we know how the past turned out and the present is a mystery being solved from minute to minute. So a film steeped in sentimentality for the '80s ought to be a pretty easy sell, particularly when you combine that premise with a star whose track record is solid. Maybe if Pixels had been released in 2011, riding off the success of Grown Ups and Just Go With It, instead of in 2015 off the abominations of Blended and Men, Women & Children, it would have hit the mark, but in the last few years Sandler has become tainted by a reputation for films that aren't just bad from a review stand-point, but bad from the stand-point of how audiences have reacted to them. Where Sandler used to be a known property who, even if he didn't deliver something that critics tended to like, could at least be counted on to deliver for the audience, he's since become a hard-sell who, if you invest your time and money into seeing his movie, you might only get the satisfaction of knowing where he went on vacation while the movie was being filmed.

That's too bad since Pixels is actually not terrible, and I say that as someone who is no fan of Sandler's and was fully prepared for this film to be more of the same. Pixels is not, to be clear, a good movie. All the thought that's gone into it seems to have halted at the level of the premise and everything that unfolds from that point is half-baked and doesn't make a lick of sense if you give it even a moment's thought. For example, the aliens attack in accordance with the rules of engagement they understand from the video games, meaning that they give humans 3 chances to beat them in combat before they annihilate the planet. They don't announce beforehand which particular game they'll be using to wage war, yet the film's government scientists (which includes Michelle Monaghan as Sandler's love interest) are somehow able to anticipate and equip themselves with exactly the weapon needed to fit the game that will be played in each combat session. Eddie Plant secretly uses cheat codes to succeed, writing the code to a particular game in a place where only he'll be able to see it, which means that he's also, somehow, able to anticipate which codes he'll need. Is it dumb to fixate on this? Probably. But it's a dumb movie.

But for the most part, it's dumb fun. Despite my misgivings, Pixels actually had me... and then it lost me. Here's how: Ludlow is established as being obsessed with the video game character Lady Lisa, a buxom blonde who sports swords and very little clothing. During the climactic battle where the aliens unleash seemingly every arcade game character ever, Ludlow comes face-to-face with Lady Lisa who, unlike literally all the other game characters, is not a blurry, pixelated figure but a flesh and blood person. When the aliens are defeated, she disappears along with all the other characters sent into battle and Ludlow is devastated and angrily wonders why Q*bert, who is gifted to humans as a reward for winning the second battle, gets to stay while Lady Lisa is taken away. Monaghan's character remarks, "Q*bert's a trophy. I guess we get to keep the trophies." Q*bert then promptly transforms into Lady Lisa so that Ludlow can live happily ever after with her, making literal and explicit the attitude that films usually only suggest in figurative terms, that women are trophies to be gifted to men, and that even the schlubiest guy is entitled to nothing less than the most beautiful woman he can imagine. You came so close Pixels. You made it all the way to the final ten minutes of your running time, and then you made me want to stab something.

Should It Have Been a Blockbuster?: Solid maybe.
Posted by Norma Desmond at 8:00 AM