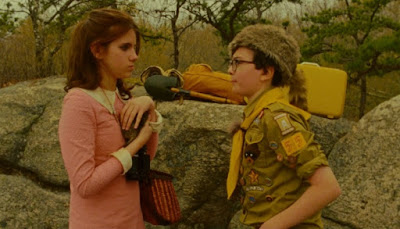 “I always wished I was an orphan. Most of my favorite characters are. I think your lives are more special.”

“I love you, but you don't know what you're talking about.”

To me, that exchange is Moonrise Kingdom in microcosm. It’s the story of two kids who are almost fatally romantic and so caught up in the performance of their adventures that they don’t appreciate the consequences of the actions that they’re taking, don’t understand the gravity of the pronouncements that they’re making. Misunderstood and written off by those around them, they long for adventure but, more than that, they long for where the adventure will take them: to a place where they will be understood and valued. One of Wes Anderson’s best films (to my mind, second only to The Royal Tenenbaums), Moonrise Kingdom is a deadpan delight.

The world that Anderson depicts on screen could not be mistaken for the real world. His films are overt in their artifice – all of the characters speak in a clipped fashion, drained of emotion, and the art direction can perhaps best be described as “precious,” built on a dollhouse aesthetic – but Anderson is so invested in that artifice, in building it into a living, breathing world, that it’s charming rather than cloying. In Moonrise Kingdom that world is located on a small island in New England in 1965, inhabited by Sam (Jared Gilman) and Suzy (Kara Hayward). Suzy is the daughter of a pair of lawyers (Frances McDormand and Bill Murray) and is joined in the family by three brothers. Sam is an orphan who is the most unpopular member of Khaki Scout Troop 55 under the supervision of Scout Master Ward (Edward Norton). Both kids are troubled and when they meet briefly one summer, it begins a year-long correspondence that will transform into a plan to run off together, leaving everyone else behind and starting over from scratch (though the kids’ concept of “forever” is questionable, given that Suzy takes her brother’s record player but leaves behind a note promising to return it within ten days).

With Sam’s canoe full of supplies and Suzy’s suitcase full of books, the pair set off to make their own way in the world, informed by little more than their rich fantasy lives and imaginations, as well as the skills that Sam has picked up as a Khaki Scout (upon being captured the first time, Sam is praised for what Scout Master Ward deems the “best pitched camp” he’s ever seen), and pursued by Suzy’s parents, Scout Master Ward and the rest of Troop 55 (who arm themselves just in case Sam and Suzy put up a fight – which, in fact, they will), and the island’s police officer (Bruce Willis), a lonely man who has been having an affair with Suzy’s mother.

In photography the magic hour is that period of the day when everything is suffused with a golden glow. It’s the time of day when change is about to occur – the sun about to rise or the sun about to set – and it has a fleeting, dreamlike quality to it. Narratively, Moonrise Kingdom might be said to take place in the magic hour between childhood and adolescence, a delicate place where even things that are overtly sexual are rendered innocent by the kids’ lack of understanding about what, exactly, they’re doing. I think that’s what makes Moonrise Kingdom so special, the fact that it captures something as elusive as that in-between place where a kid isn’t quite a child anymore but isn’t quite an adolescent yet either; it’s like Anderson has caught lightning in a bottle. Centering a movie (at least one made for adults) around children can be an iffy proposition, particularly in a story like this where the children are supposed to act older than they are and proceed at every turn with a seriousness beyond their age, but the combination of Anderson behind the camera and Gilman and Hayward in front works wonders. There’s a sincerity and gravitas to those performances which nicely complements Anderson’s ironic style, making this perhaps the only of his films that can be described as “sweet.”

When I saw Moonrise Kingdom for the first time in 2012, I was immediately enchanted by it. It was funny and melancholy, a story with a lot of heart that never gets sunk by sentimentality and which possesses wit without being too clever by half. I’ve seen it many times since then and enjoyed it every time. There’s a timelessness to Moonrise Kingdom, a resonance that speaks beyond its surface whimsy to reveal the depths of humanity at its core. It's a beautiful piece of work, and a lasting one.
Posted by Norma Desmond at 8:00 AM

What a wondeful movie this is. You're right about it being sweet, but it never becomes twee. I've watched it a few times myself and enjoyed it each time.