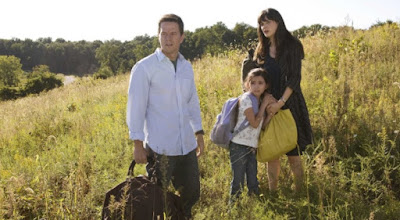 Well... what can one even say? The idea behind M. Night Shyamalan's The Happening, his "the planet is trying to kill us" thriller, is actually a pretty good one. Humans are pretty terrible to the planet so the premise that, like any living thing, it would have an instinct for self-preservation that would drive it to try to rid itself of what's harming it, is a solid place to start a story. The problem is in the execution, which results in the film seeming more like a comedy (a very, very boring comedy) than a thriller. Add to it that it came from a filmmaker that audiences had clearly lost confidence in after two films that were terribly received (though much better received than some of his films yet to come) and you had a recipe for a film that had no business trying to make it work right in the heart of the summer release season.

The Happening is a bizarre combination of hilarious and thuddingly dull and it is never for even a moment anywhere near good. It begins in New York, where the wind blows ominously through Central Park and next thing you know people are killing themselves en masse. As the news gets out, people assume that it's the result of a terrorist attack using an airborne toxin, which is a fair enough assumption, and people in the northeast begin to flee the cities for the assumed safety of more rural areas. Among them are Philadelphians Elliot (a disastrously miscast Mark Wahlberg), his wife Alma (ostensibly played by Zooey Deschanel, though if you told me that this was just a computer generated actor that merely looks like Deschanel, I wouldn't disbelieve it), his colleague Julian (John Leguizamo), and Julian's 8 year old daughter Jess (Ashlyn Sanchez), who board a train that's headed for Harrisburg but ends up stopping midway after the crew loses all radio contact. There Julian leaves the group and heads to Princeton in the hope of finding his wife, who missed the train, leaving Jess in the care of Elliot and Alma as they try to flee a danger that they come to realize is literally all around them.

The Happening is a pretty brutal movie to sit through because it's bad to the point of seeming amateurish (if you're ever tempted to watch it, just watch the Honest Trailers version instead). The acting is terrible ("What?! Noooo!"), the direction is bizarre (my God, that scene where they're standing in a field listening to the members of the other group as they take turns shooting themselves and Wahlberg keeps telling his group that he just needs a second - just a second, okay??? - to think. I'm sure it's much shorter, but it feels like it goes on for about ten minutes), and the story and dialogue are just awful. For one thing, despite the many, many bodies that litter the film's landscape, The Happening struggles to find a way to dramatize its premise. The strategy of cutting to shots of the wind rustling in the trees and the grass is meant to provide an air of menace to dramatic moments, but in practice it doesn't really work, it just looks like... little gusts of wind. The depictions of people driven to suicide by the toxins released by plants are supposed to be horrifying and yet they instead end up being darkly funny (the only deaths that actually do seem horrific occur when two adolescent boys who have joined Elliot and Alma get shot to death while trying to break into a house). And, as a slight aside, why is it that in a story where people are concerned about airborne toxins, not a single one made a stop at the drugstore to buy a face mask? Seems to me that that would be the logical first step.

To be honest, The Happening (and just what the hell is that title, anyway? No wonder no one wanted to see this) plays like it didn't even have a script at all. The story is nothing - there's a "happening," the characters try to flee, and then suddenly the happening is done - and the dialogue sometimes seems like it's been improvised by people who are unaccustomed to improvisation and were only given one kick at the can in front of the camera. This is the kind of movie where a character casually tosses off his theory about the horrible thing that's happening with a "By the way, I think I know what's causing this" in the midst of a discussion about hotdogs (which is "Oh, hi Mark" levels of bad writing), and where Julian admonishes Alma by telling her, "Don't take my daughter's hand unless you mean it," a line of dialogue that means approximately nothing and is also pretty rich coming from a guy who is in the process of leaving said daughter behind in the middle of a crisis.

The Happening is a bad movie in the manner that few movies that have the benefit of studio polishing actually get to attain. It's like one of those low budget, C-grade science fiction movies from the '50s, but with less self-awareness. I do think that the basic idea for the story, that humans have abused the planet to the point that the environment has adapted itself to fight back and reject/attack humans, is a good one that could have the potential for a compelling movie, but it just doesn't turn out here. Nothing about this movie works in the way it's intended to and it ends up being laughable rather than dramatic or scary. Sometimes a box office failure is an artistic success, a film that ends up being sunk by things outside of itself like marketing or bad timing. The Happening is not one of those films. All things considered, it's more of a box office success than it should have been, given its complete artistic failure. It's not often that I come to the conclusion that a movie deserved even less than to be considered a "bomb," but The Happening hits that mark.


Should It Have Been a Blockbuster?: When the plants take over, I hope this film is the first thing they come for
Posted by Norma Desmond at 8:00 AM