Tales from the Black List: Oz the Great and Powerful (2013) 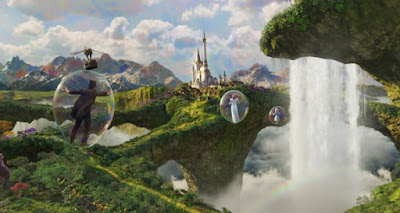 In hindsight, the fact that Oz the Great and Powerful would be met with both enthusiasm and disdain was inevitable. The screenplay hit the Black List in 2010, about 8 months after the release and massive success of Alice in Wonderland, so the people who shell out money to make movies had every reason to be excited about the prospect of using people's connection to a beloved old property, pumping it full of CGI, and then watching the money roll in. But 3 years can be a long time in pop culture, particularly when your project is anchored by an actor who has become a lightning rod for animosity, and by the time Oz the Great and Powerful hit theaters, the knives were out. The film did okay box office-wise but was critically savaged and went on to become one of those movies that makes hundreds of millions at the box office but leaves absolutely no lasting mark on pop culture. As a result my expectations were pretty low, but to my surprise Oz the Great and Powerful is actually not terrible - it's not great, mind you, but it's a perfectly fine (if totally forgettable) movie.

The star of Oz the Great and Powerful is James Franco, which I admit played a bit of a role in my never having seen this movie previously as I assumed that this was a form of Johnny Depp cosplay/performance art since Franco averages something like 50 projects a year including acting, directing, writing, teaching, and other things and at least 10% of those things appear to be done purely for the lulz. To my great surprise, however, Franco is more than merely tolerable as Oscar "Oz" Diggs, a con artist who gets caught in a tornado and transported to the Land of Oz where he proceeds to pass himself off as the wizard foretold by prophesy; he's actually pretty good! I can understand why many critics didn't like his performance because it's understated against very flashy surroundings, which can read as muted or even dull and probably was overwhelmed by everything around it when played on the big screen, but having watched it on a small screen I found it to be charming and layered. In a lot of ways Franco is the perfect actor to play a character like Oz because he can convey a sense of being disreputable without being outright evil and the character here is very much a man whose default position is to do the wrong thing (because that's often the easy thing) but whose heart is easily swayed towards the right thing.

Surrounding Franco are a trio of actresses playing the various witches of Oz. Michelle Williams and Rachel Weisz play Glinda and Evanora, respectively, and like Franco tend towards quieter, more interior performances, though Weisz has the benefit of being able to liven up her role with touches of evil. Mila Kunis plays Theodora, the future Wicked Witch of the West, and of the actors seems to be the only one who understands the size of the production and pitches her performance to the nosebleeds accordingly, though it is perhaps easier to "go big" when you have to act through what appears to be a pound of green prosthetic and several of your lines are punctuated with a shrill cackle. At the time of Oz's arrival the three witches are at odds, with Evanora reigning over the Emerald City and having convinced Theodora that Glinda is the Wicked Witch who murdered Oz's King, and Glinda ruling over her own domain and trying to ensure that the principles of her father, the late King, live on. On his arrival, Oz is tasked with finding and killing Glinda, then learns the true identity of the Wicked Witch and teams up with Glinda to defeat her, unaware that his womanizing ways have added fuel to the fire.

All told, Oz the Great and Powerful is a movie that's pretty easy to roll with if you watch it in the right mood but which also has a pretty high potential to strike you as deeply annoying. The references to The Wizard of Oz are so lacking in subtlety that the movie might as well fully stop for a moment so that Franco can turn to the camera and say, "It's not a coincidence that 'Oz' is in the title of both, this movie is actually connected to The Wizard of Oz!" The CGI is aggressive enough that it breaks the spell movies are supposed to weave, wherein you're transported to another world - you can't be transported to somewhere that doesn't exist, and Oz the Great and Powerful is constantly reminding you that its world doesn't exist. The world of The Wizard of Oz doesn't actually exist either, of course, but because the things on screen (the people, the creatures, the sets and their decoration) physical exist in the real world the unreality of that movie is made to seem whimsical and charming. In Oz the Great and Powerful it feels more hollow and empty. Then of course there's Franco's presence, which alone may be enough to make many people give this a skip.

However, like I said, in the right frame of mind Oz the Great and Powerful is a reasonably, if fleetingly, entertaining movie. I can't imagine ever sitting down to watch it again or rushing out to see the sequel that was announced just before this one was released but which may or may not be off the table by now, but once I got past the film's slowish start (including a black and white prologue set in Kansas because, remember, this movie is connected to The Wizard of Oz) I enjoyed it for what it is. There's no point at which I ever felt that the film had any true reason for existing beyond the opportunity to cash in on some theoretically easy money, but that's Hollywood for you. I've damned the film with faint praise, I know, but that's better than no praise at all, right?
Posted by Norma Desmond at 8:00 AM