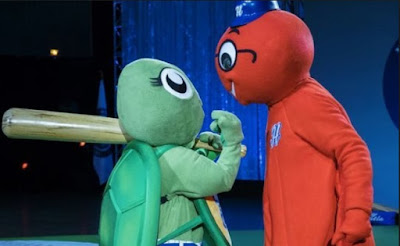 When Christopher Guest is at the top of his game, he creates comedies that are among the funniest out there. When he's not quite at the top of his game, he still creates films that are good for at least a few genuinely hearty laughs. Mascots, which like most of Guest's films plays out in mockumentary format, is not great Guest. That may be because it lacks two of Guest's most valuable regulars - Catherine O'Hara and Eugene Levy - and it may be because it takes as its premise something that doesn't have much air of reality. Community theater productions are a real thing (Waiting For Guffman), dog shows are a real thing (Best in Show), folk music concerts are a real thing (A Mighty Wind), and Oscar campaigning is a real thing (For Your Consideration), but are there actually mascot competitions? The focus here might be too specialized and obscure. There are funny moments in Mascots to be sure, but it doesn't hold together all that well.

The premise is pretty simple. Several people who work as mascots for sports teams gather at an annual competition in California in the hope of winning the Gold Fluffy Award, or at the very least the Silver or Bronze Fluffy. They rehearse their routines, some argue with their coaches or partners about their routines, some suffer anxiety about performing, some encounter difficulties that may prevent them from getting on stage. The competitors that the documentary within the film focuses on include Phil Mayhew (Christopher Moynihan), a lonely real estate appraiser who only feels connected to other people when he's in costume (when he greets the football team he works for out of costume, they don't even know who he is) and is excited about coming to the competition because he's recently connected via Facebook with a high school crush who lives near where the competition is taking place; Cindi Babineaux (Parker Posey), who performs as the mascot for an all-women's college and almost gets disqualified as a result of complaints that the team's name was once "the Leaping Squaws"; Mike and Mindy Murray (Zach Woods and Sarah Baker), a bickering couple who perform as a mascot duo for a minor league baseball team; Tommy Zucarello (Chris O'Dowd), who performs as a hockey mascot that just a giant fist; and Owen Golly, Jr. (Tom Bennett), a third generation mascot who didn't really want to be a mascot in the first place and is in a power struggle with his father (Jim Piddock) over how he's portraying the character he has inherited.

Other Guest regulars making an appearance and bringing their own very particular something to the proceedings include Bob Balaban and Jennifer Coolidge as the owners of the minor league baseball team, who met through an escort service and whose relationship solidified as a result of him requesting "weird stuff" on a gradual basis rather than all at once; Fred Willard as Phil's coach, doing his usual Fred Willard thing that falls somewhere between cringe-inducing and oddly endearing; Jane Lynch and Ed Begley Jr. as a pair of feuding competition judges who were themselves once mascots, the former a popular performer who parlayed her notoriety into an inspirational memoir, the latter infamous for the fact that he performed as an "anatomically correct" donkey; Michael Hitchcock as the competition's organizer, who spends much of his time worrying about the fact that a Furry has snuck into the building and is going around sexually harassing the mascots; and Guest himself reprises his character Corky St. Clair from Waiting for Guffman.

There are a lot of funny people in Mascots, so it follows that there are many funny moments throughout the film. The key to Guest's films is that even though the characters veer towards the ridiculous, the actors approach them with complete sincerity and it's the seriousness with which they perform their passions that creates the comedy. Cindi's... let's call it "avante garde" routine in the competition (which ends up being performed by someone else), which elicits a scattering of confused and polite applause, is funny because it isn't played as if it's meant to be funny; it's performed as if it's being fully invested in. Similarly when Fred Willard's character attempts to recruit a contestant with dwarfism to join Phil's routine it's his sincerity that sells the exchange because he thinks he's having a perfectly pleasant conversation in which his curiosity, expressed in the bluntest and least graceful terms possible, is being satisfied, completely unaware that the other party is, quite rightly, making fun of him. The characters are the object of fun, and yet they're so genuine that it's hard not to have some level of affection for them.

That level of affection is true with respect to most of the characters, though the Murrays, who are engaged in a prolonged marital spat centering on his lack of fidelity, are actually pretty nasty and bring a darkness to the film that I don't think serves it very well. The film is also ill-served by its half-baked premise (though the competition scenes are fairly entertaining), which includes the competition being sponsored by the "Gluten-free Chanel" because... why not, I guess? It's the kind of soft joke that feels like it should have been a placeholder in the script until the writers (Guest and Piddock) came up with something better, but given the other weird specialty chanels the film provides glimpses of, maybe they just don't ever watch any TV and don't know how to show something more realistically dumb. It's the sort of joke that inspires a "Hmm" instead of a "Ha," which is unfortunately the rule in Mascots rather than the exception. It's funny in places, but never as consistently funny as it should be given the level of talent assembled.

Next in the Marathon: Tallulah
Posted by Norma Desmond at 8:00 AM