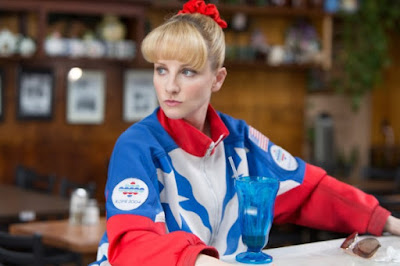 Can a comedy be so nasty that it ceases to be a comedy at all? There are plenty of R-rated comedies that have come out in the last decade and a half and have built themselves around the simple fact of their protagonist being a mean piece of work (some even get straight to the point by putting "Bad" in the title, like Bad Santa or Bad Teacher; this one might have been called "Bad Olympian," except that that would imply that she wasn't a successful athlete), some on the assumption that all you need to make a comedy successful is a character who acts like an asshole in every situation for no discernible reason. The first half hour of The Bronze is relentlessly unpleasant for this very reason. After that, it settles down a little bit and stops trying so hard to prove its "edginess," though it doesn't get significantly better or funnier. It does, however, feature a sex scene that has to be seen to be believed and which is almost entertaining enough to make the rest of the film worth watching.

The bronze of the title is the medal won by Hope Ann Greggory (Melissa Rauch) at the 2004 Olympics, when she achieved hero status not just for making the podium but for doing so by playing through injury, essentially recreating Kerri Strug's iconic Olympic moment (Strug's teammate, Dominique Moceanu even makes a cameo), except that instead of being an adorable sprite, she's a foul mouthed jerk. Twelve years later she's still milking the goodwill from her victory, enjoying freebies throughout her small town, and living in the dimming light of her glory, walking around in the 2004 team warmup suit, masturbating to the video of her Olympic triumph, and content to do nothing to move on with her life. Frustrated by her unwillingness to do anything to become independent, her father (Gary Cole), encourages her to step up to take the place of her recently deceased former coach, who had been training aspiring Olympic gymnast Maggie Townsend (Haley Lu Richardson) in preparation for the 2016 games. Hope ends up taking on the assignment, bringing her back into the orbit of former lover/nemesis Lance Tucker (Sebastian Stan), as well as Ben (Thomas Middleditch), whose father co-owns the gym she used to train out of and who becomes her assistant coach.

Even though none of it really solidifies enough to form a thematic base for the story, there are some ideas floating around in The Bronze about the Olympics, specifically, and athletics in general. One is the idea of entire childhoods and adolescences being sacrificed in the pursuit of an Olympic dream and then, once that dream is achieved, there being nothing left because the pursuit has literally been all that that person's life has been about. Here, Hope is depicted as someone who has been raised by her father (her mother died when she was an infant) to see Olympic achievement as her destiny, even though the film stops just short of depicting him as an obsessed stage parent. That she has no drive to do anything now that she's an adult is at least a little bit understandable, because what are you supposed to do once you've achieved the only goal you were ever allowed to have? Her only skill, aside from her athletic skills, appears to be getting people to do things for her/give things to her despite acting like an absolute beast to them, so I'm not sure what kind of career path she could reasonably pursue. Maybe she could run for President.

Another idea is that of parents pushing their children into athletics in the hope of being able to profit off of their talents. This isn't really pursued via Hope's father - though the two characters are introduced when Hope is an infant, wrapped up in an American flag that her dad has slung over his shoulders and chest like a baby bjorn, which at least gives the impression that he started grooming her for greatness immediately - even though there's some suggestion that he, and her coach, pushed her a little too hard after she received her injury, resulting in her not being able to properly recover (though later she says that she pushed herself harder than she should have and against everyone's advice, so who knows). It's hard to say that he's a "stage parent" in that he's financially supporting Hope well into adulthood and just wants her to go out and get literally any job in order to relieve the financial burden from his shoulders. It's more Maggie's mother (Cecily Strong, criminally underused here) who gets the stage parent edit, though in a toothless way that depicts her as a gently encouraging parent who turns on a dime into a greedy parasite the moment Maggie wins a medal. It's a sudden turnaround without any actual build up, which is not unlike what ultimately happens to Maggie, whose abandonment of her hometown and its people exists solely to "redeem" Hope, who may be a jerk to everyone that she encounters, but at least she's stayed true to her roots.

Although I didn't really care for the film, I can nevertheless appreciate the level of commitment displayed by Rauch (who co-wrote the film with her husband, Winston Rauch) in the lead role. Right up until the last ten minutes or so, when the film decides to reveal that beneath its hard shell there's a mushy center, she makes no attempt to downplay how terrible Hope is and, in fact, leans pretty far into it to make up for the way that everyone around her seems to not notice how rude and mean she's being at any given moment. She's not a "rootable" character - she's terrible to poor Ben, whom she nicknames "Twitchy" because of his compulsive blinking, she's so jealous of the idea of being usurped in the town's imagination by Maggie that she attempts to sabotage her once before trials and then imagines sabotaging her right before she competes at the Olympics, she steals cash she finds in the envelops from her father's mail truck, and pulls the "do you know who I am?" card everywhere she goes in order to get free things - but she doesn't have to be, either. As long as the film manages to be funny while exploring her antics, it doesn't matter if you like her. Unfortunately for The Bronze, it's just not very funny.
Posted by Norma Desmond at 4:00 PM