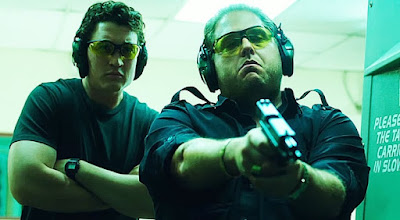 When Bertolt Brecht wrote "Mother Courage and Her Children," it was his intention that the main character would be seen in a negative light. She's a war profiteer and he wanted the audience to come away thinking her morally reprehensible. Instead, the audience found her sympathetic. Where he saw a "hyena of the battlefield" making her living off of the suffering of others, they saw a survivor who did what she had to do. He rewrote the play and made her worse, but it did nothing to shake the audience's alignment with her. The European audiences of the 1940s, having endured the relentless upheaval of WWII, saw her as something of a victim of circumstance, someone whose actions might not have been admirable, but whose drive to endure was. In the same vein, some might view the story of David Packouz and Efraim Diveroli less as a story of two people trying to cash in on the chaos of the Iraq War and who, through their participation, bear some moral responsibility for the lives lost and people displaced, and more as a story that glamorizes an element of war by showing how it allowed them to attain all the most desired trappings of Bro culture. War Dogs is a pretty shallow movie that pretty much does exactly what it's trying to criticize, yet it's not without its charms - which is the problem. A story like this shouldn't feel like so much fun.

Adapted from the book Arms and the Dudes, War Dogs is about two childhood friends in Miami: David (Miles Teller) and Efraim (Jonah Hill). The first is depicted as an inherently good guy, a naif who somehow maintains his credulity even after a not insignificant amount of time spent working as an arms dealer, someone who simply got in over his head after coming under the sway of a bad influence. The second is depicted as the devil incarnate, if the devil were particularly susceptible to hurt feelings, a man driven by excess and selfishness. Two guesses as to which of these two men participated in the production of the film and appears in a cameo. In the film's telling of it, David is just a guy struggling to make his way and gets involved in Efraim's business, which bids on small contracts to fill arms orders for the US government, as a means to support himself and his girlfriend, Iz (Ana de Armas), with whom he's expecting a child. Together the two build up the business, making a small fortune when they turn a potential disaster into a success by travelling to Jordan and driving a truck load of guns into Iraq, and enjoy all the spoils of life in the fast lane. But with more money come more problems and soon enough the two men find themselves at odds as Efraim's desire to make a profit at any cost push David to the limits of what he can handle, and David's relationship with Iz becomes increasingly strained as a result of the growing list of questionable things he feels like he has to keep from her.

As Efraim and David's business grows from a small, two-man operation into a midsize company with lots of employees (all of whom look like they've just emerged from the same cookie cutter), the one constant is a large poster of Tony Montana, gun in hand, from the climactic scene of Scarface. The implication, I suppose, is that the guys are blind to the horrible things that Tony does because he looks so cool while he's doing it that all of his actions are bathed in a glow of awesomeness worthy of emulating. That would be more meaningful if the film didn't luxuriate in the fun that the guys are having (fast cars, stacks of cash, drugs, strip clubs, shooting semi-automatics, etc.) and go out of its way to make them look pretty slick. You can't say that Efraim is a bad guy (and it's really only Efraim who is characterized as a "bad" guy) on the one hand, and delight in his antics on the other. It's like The Wolf of Wall Street that way, portraying its characters as if to say, "These guys are shitheads. But don't they throw great parties?" Even though the film ends on a dark note, acknowledging the cost of Efraim and David's schemes, it doesn't really counteract the way that things such as the music cues and the ways that images are framed throughout the film glorifies what's going on, making Efraim seem like a commanding figure and his enterprise seem like a kind of reckless fun rather than ruthless opportunism.

But that "fun" aspect is sort of inescapable with the way that War Dogs is put together, particularly in the way that it casts Efraim and David as a study in contrasts. Even when he's doing things like strapping stacks of cash to his chest in order to smuggle it back into the United States, David is depicted as being weirdly wholesome, less interested in becoming rich than in just supporting his young family. The whole "babe in the woods" depiction of him, which strains believability by the end, results in him seeming bland and blank. He's a passive character who is moved from one situation to another, which in turn makes the gregarious and driven Efraim, who is an active character that makes things happen and makes the narrative move, seem all the more intriguing. Would you want to hang out with him in real life? No. But he is pretty entertaining to watch even though he is an objectively terrible human being.

But, as I said, he is entertaining and that's largely down to Hill's performance. Somewhere within the span of the last few years, Hill has become quite the skilled character actor and his portrayal of Efraim as a man of who is always adjusting his personality to suit the situation and the person with whom he's interacting is excellent. Efraim is a character of almost unrelenting self-confidence, but there are moments in the film when Hill lets the facade slide to show a vulnerability so intense it's like an exposed nerve. It occurs when he surprises David at home and discovers him having a dinner party and then Iz introduces him as merely David's "business partner" rather than friend, and it occurs again later when David wants to put their partnership agreement in writing, which Efraim takes to mean that David thinks he's untrustworth (of course he is untrustworthy, but it obviously bothers him that his friend thinks so). What Hill demonstrates is a sensitivity to slights and a desire for acceptance, which is then channeled into a cutthroat attitude that drives him to get the other guy before the other guy can get him, and it's as fascinating as it is fleeting. The film isn't quite working at the same level as that performance - it wants too badly to have it both ways and it just feels too much like an apologia on behalf of Packouz - but it's worth seeing for the sake of appreciating that performance in all its lurid glory.
Posted by Norma Desmond at 8:00 AM