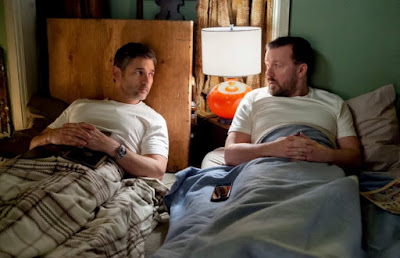 When watching a movie there are few things more disappointing than when it has the opportunity, and seemingly the drive, to be a biting satire, only to lose its nerve midway through and end up being something a lot more generic and safe instead. That's the case with Ricky Gervais' Special Correspondents, a comedy that seems willing and able to take a piece off the media and the commodification of tragedy for the purpose of making money, only to fold up and reveal itself as a standard issue buddy action comedy. Parts of the film are quite funny, the performances are better than they have any reason to be, but overall I found myself much more engaged by the paths the film keeps choosing not to take than by the actual story it decides to tell.

Gervais, who directed and wrote the film in addition to starring, plays Ian, a sound technician whose unglamorous job and devotion to hobbies like collecting Marvel figurines and comic books has left his relationship with his wife, Eleanor (Vera Farmiga), on its last legs - and though she's shallow and selfish, she may have a point about Ian being in a rut because though he boasts that he's covered numerous Tours de France and four Olympics as a sound tech, he's also forced to concede that he didn't actually go to do it on location, choosing to perform his part from his office in New York, which is the only place he's ever been aside from England, where he's from. While Ian seems content to simply carry on and live a quiet life, Eleanor had thought they'd be on to bigger and better things by now and feels betrayed by his lack of ambition and restless for a new experience.

Eric Bana plays the other half of the film's mismatched duo, his character, Frank, is a radio newscaster in practice but really just your typical rogue cop character, right down to a scene at the beginning where he's dressed down by his boss and told that if he doesn't start following the rules, he's going to lose his (press) badge. When civil war breaks out in Ecuador, Frank is given the chance to redeem himself by being the station's man on the ground and opts to bring Ian along to work the equipment, but events transpire which prevent the pair from getting on the plane. Instead of going back to the office and admitting what's happened, they decide to camp out in the apartment of Brigida and Domingo (America Ferrera and Raul Castillo), who own and live above the restaurant across the street from their office, and pretend to be phoning in dispatches from Ecuador.

This is where the film had the chance to actually be about something, touching as it does on reporters lying about where they're reporting from, creating false narratives centering on their own heroism, and, after Frank reports a "scoop" about the leader of the uprising which he's made up but which every other news outfit immediately jumps on in order to corroborate and elaborate on his "reporting," the way that the 24 hour news cycles has created such a rush to get information out that the necessity of checking information before reporting it is becoming a lost art. To be honest, given that Frank recognizes the fountain that a TV reporter is standing in front of while reporting the story, and yet seems entirely unaware that Ecuador is located in the rain forest rather than the desert, I expected the joke to be that no one was actually reporting the story from Ecuador, a twist that the film inadvertently sets up when Frank calls in with his first "dispatch" and his boss is surprised that he's there as word is out that the borders have closed and later remarks that everyone's reporters somehow got over the border before it shut down. But, in the end, this isn't what Special Correspondents is doing and, in fact, Frank and Ian won't even end up being called to account for the story that they've made up in the first place.

When Frank and Ian decide to pretend they've been kidnapped in order to explain their failure to get to a meeting at the American embassy in Quito (it apparently comes as a surprise to them that the American government would want to speak to them after Frank spices up his made up story by implying that the rebels are being funded by the US government - a suggestion which has deep enough roots in actual history that the story could find its satire in Ian and Frank accidentally revealing a real scandal) the film only increases its opportunities at satire, as Eleanor uses the "hostage taking" to launch a singing career under the guise of fundraising a ransom (and the song she writes, which hits all the right patriotic buzzwords in asking Americans to "spare a dollar for a hero," is effective precisely because it probably would be effective in reality), but the film whiffs the chance once again - which is a shame because Farmiga is so good as the borderline sociopathic Eleanor, who shamelessly and effortlessly self-promotes while her husband is a "hostage" and then uses the need to fundraise a ransom as an excuse to sell all his collectibles.

To be honest, all of the supporting players are pretty great despite their roles being so thinly drawn. This includes Ferrera and Castillo who give knowing performances as characters who are overly credulous, Kelly Macdonald as the fellow reporter/love interest for Ian who disappears for a stretch of the story and reemerges when it's time for Ian to walk off into the sunset with someone, and Kevin Pollak as the radio station boss who wants to bring Frank and Ian home safely but is also pretty giddy about the fact that the station is now number one in the ratings because everyone wants the latest on the hostages. Gervais is a great director of actors and brings out the best in everyone on screen, but the story loses its way long before Ian and Frank decide that in order to bring themselves out of hiding they need to sneak into Ecuador and "escape" captivity, resulting in the narrative resolving itself with guns and bullets and the characters running for their lives from actual danger. Special Correspondents has a few laughs, but it ultimately has no sense of purpose.

Next in the Marathon: The Fundamentals of Caring
Posted by Norma Desmond at 8:00 AM