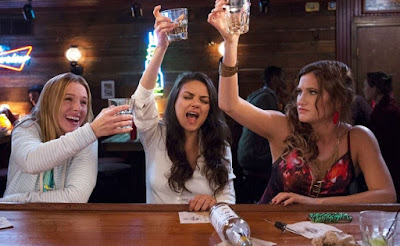 A movie like Bad Moms is proof through absence of the value of women in the writer's room, at least when it comes to projects that are about women. Because while it's funny enough and wants very badly to be (and thinks that it is) sympathetic to the plight of "the other," Bad Moms ends up giving itself a lot of credit for insights that it doesn't actually possess. The point it wants to make is that society places an impossible burden on mothers by creating unachievable standards for motherhood, but I'm not sure that writers/directors Jon Lucas and Scott Moore really understand why that's a point that needs to be made. Bad Moms is funny in the way that a lot of raucous comedies are funny, with a lot of the laughs coming from the "... did they just say/do that?" school of shock humor, but it's not so funny that it covers up the fact that Lucas and Moore don't know how to resolve the plot they've set into motion because they don't really understand the issue they're trying to address.

As in The Hangover, Lucas and Moore's most successful film to date (which they wrote and Todd Phillips directed), Bad Moms centers on a trio of friends (or "friend-ish" people) and their R-rated adventures: there's Amy (Mila Kunis), the somewhat uptight one who needs to loosen up a bit and who's life gets the most messed up during the process of the story, Carla (Kathryn Hahn), the "wild" one whose cool facade masks an inner sentimentality, and Kiki (Kristen Bell), the well-meaning weirdo. Also like The Hangover, Bad Moms is built around the R-rated comedy hallmarks of foul language, nudity, drugs and alcohol, only softened ever so slightly to better suit (I suppose) a "female sensibility." Faced with the relentless and ever escalating demands placed on them, these moms says "Fuck it" and quit the PTA, start going to movies in the middle of a weekday, go out to pick up men, throw a raging party, and start putting themselves first for a change, all while doing battle with Gwendolyn (Christina Applegate), the mom who runs the PTA and, through it, the entire school.

But, while the film is on the side of the renegade trio, it doesn't really commit itself to championing them. It acknowledges that they're underappreciated and over-relied upon (except for Carla, for whom being a "bad mom" is a lifestyle rather than a break from her responsibilities as a parent), but it also trivializes what they're going through by setting them up against straw men. In the film's vision, these women are pushed to the brink because they're tied to men who are so lacking and clueless that even the laziest of actual husbands/fathers could look at them and feel good about themselves in comparison. Amy's husband is so immature that it would be an insult to frat boys to compare him to one; he's more like a surly teenager whose contributions to the household seem to consist solely of sitting on the couch playing video games (and carrying on a webcam affair with a woman who "gets" him in a way that Amy, what with her demands that he participate in their family and help shoulder the burden of childcare, does not), while Kiki's husband refers to motherhood as her "job" and apparently expects her to do everything for their four kids all by herself (he has his own job, after all). The way the film sees it, the problem is a few lone men who are too dumb or self-absorbed or misogynistic (or some wonderful combination of all three) to do their part, rather than a more general issue of men thinking that they're doing half the work (by virtue of the fact that they're doing more than has been traditionally expected of men in the domestic realm) when in fact the division of domestic labor is still tends to be anything but equal in heterosexual relationships.

Bad Moms sees the problem as an issue of a few bad apples - though it doesn't even really see them as that bad, given that Amy provides the excuses for her husband's behavior and lets him off the hook even after he peaces out for a while to go "try things out" with his webcam other woman, and given that all it takes to bring Kiki's husband down to Earth is for her to stand up for herself, because a controlling asshole who can't stand to be left alone with his own kids for an hour would totally be cowed and submissive after being yelled at once - and one of the potential solutions as its version of the "manic pixie dream girl," here figured as a hot, widowed single father who is a competent and capable parent (or so we're left to assume), a good listener, and an enthusiastic performer of oral sex. The result is that the film gets to have its cake and eat it, too, allowing the women to repudiate the constraints of the traditional roles of wife/mother, only to embrace those roles in a just slightly different way at the end. Amy splits up with her husband, but she ends up with the single dad; Kiki stands up to her husband, remaining as all in as ever but now delegating certain tasks; and Carla learns to embrace the "Mom" half of the bad mom label by actually agreeing to show up to watch her kid play sports. So neatly is everything tied up that the trio even agrees to forgive and forget with Gwendolyn, even though the woman planted drugs on Amy's daughter as part of her attempt to retain control of the PTA, which is just psychotic and worthy of a shovel to the face, not a hug.

Look, is Bad Moms funny? Yeah. I laughed and I laughed a fair bit. It's a decent comedy and I'm all for anything that casts Kathryn Hahn in a prominent role (I will forever hold out hope for a Parks and Recreation spinoff series centering on her character). My point is that it's kind of smugly self-congratulatory about absolutely nothing. It pats itself on the back for having insights that aren't insights, and sells itself on the idea of rebellion (these women aren't "bad" because they're doing things that are wrong; they're bad because they're doing things that are considered fine for everyone except mothers to do) only to soften every edge it presents so that it can end on the warmest and fuzziest notes possible, where all the problems are miraculously solved and everyone ends up as friends. That doesn't mean that it's a bad movie, but it would be a better one if it wasn't pretending to be something that it's not (and was actually aware that it was doing that in the first place).
Posted by Norma Desmond at 6:56 PM