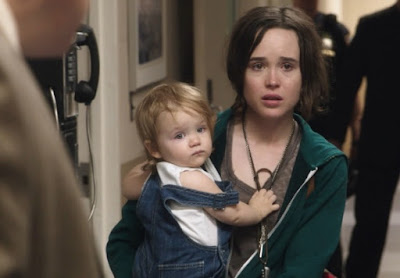 Midway through Tallulah the eponymous character imagines the world without gravity, a sudden shift that finds everyone just floating up into the air, untethered to everything below. Having spent most of her young life drifting around the United States, and having lost whatever connection to others she once had after being abandoned as a child, she's already the definition of untethered - beholden to no one, nothing to hold her back - and yet as she describes the scene, she insists that she would grab onto something and stay connected to the earth down below. Because what is there if there isn't connection? Easily the best of the films I've watched for this marathon, Sian Heder's Tallulah is a thoughtfully told tale that manages to have compassion and understanding for even its most broken characters.

Ellen Page is Tallulah, a girl who has nothing but her van and calls the hand-to-mouth existence she lives is a "lifestyle" as if to make her circumstances seem like a choice. For two years she's had the company of Nico (Evan Jonigkeit), but the romantic appeal of living in the van, sustained on stolen goods and things bought with stolen credit cards, has faded and all he wants now is to make it back home and see his mom. One morning he's gone and she insists (to no one, since no one else is there) that what's upsetting about it is that he didn't bother to say "goodbye." She decides to follow him to New York, assuming that she'll be able to find him at his mom's apartment, so that they can end their relationship properly, but when she arrives his mother, Margo (Allison Janney), has neither seen nor heard from him. Turned away and needing to replenish her resources, Tallulah heads for a hotel where she wanders the corridors in order to collect discarded food left over on room service trays and ends up pulled into the life of Carolyn (Tammy Blanchard), a woman who snuck to the city to have an affair and has brought her toddler along with her. Tallulah agrees to watch the girl for the night but when Carolyn returns somehow even drunker and more emotionally unstable than before, Tallulah decides that the baby would be better off without her. So she returns to Margo's apartment, claims the baby is her daughter by Nico, and spends the next several days trying to avoid the news reports of a child abducted from a hotel.

Although experience ought to have robbed her of all illusions (her backstory is revealed in a few simple sentences that say it all, even though it is in effect just a light flickering on briefly to reveal the room only to die out again and cast everything back into darkness), Tallulah is a master of self-deception. She speaks about her life off the grid as if it's a preference, though it's more likely that it's a matter of chance and the result of her having no safety net and no support and thus falling through the social cracks. She goes after Nico on the pretense that one doesn't leave without saying "goodbye" (though she didn't do much to stop it when Nico skipped out without a word on Margo to go on the road with her), but what she really wants is simply to have him back. She claims not to want to be connected to anyone, but that attitude is borne of a lifetime of rejection, a sort of "you can't fire me, I quit" type of reaction. Most crucially, she claims that she took Carolyn's child from her for the simple reason that Carolyn is unfit. Carolyn is unfit, but Tallulah's reasons for doing what she does are not so simple. When she initially takes the girl, it's just intended to be for the night, so that she's not leaving her in the care of a passed out mother, and she tries to bring her back in the morning. The only thing that stops her is that the police are already there. Her keeping the girl is an act of self-preservation in which she avoids immediate arrest and in which she's able to use the child to gain entrance to Margo's generosity. What she does is self-serving in many ways, but the more time passes, the more she convinces herself that it was an altruistic deed.

Tallulah does some pretty bad things through the course of the story. She lies, she steals, she kidnaps a baby, but the film sees her in the spectrum of her good and bad qualities. She benefits from taking the child, though the gains she makes such as getting a place to live and food from Margo are counterbalanced by the growing anxiety that she's going to be found out and arrested, but she's also driven in part by her own experience and her desire to save someone else from being subjected to the kind of chaos and abuse that she endured and she's not exactly wrong to want to removed the girl from Carolyn's care. Carolyn, who is maybe suffering from postpartum depression or maybe just shouldn't have had a baby at all (she had a baby to try to keep her husband interested in their marriage and now resents her daughter because it didn't work), and who can't even manage self-care let alone the care of a toddler, would be an easy target in a lesser film. Instead Heder goes for something more complicated, making her someone whose behavior is worthy of censure without losing sight of her humanity in the process. She's a bad mother by just about any standard, but she's also a woman who has cracked under the burden of motherhood, of the expectation that it ought to be effortless. She doesn't understand why she can't take to it as easily as others and her shame channels itself into rage and selfishness. She's not an easy character to identify with, but the film makes efforts to ensure that she becomes an easy character to understand.

Although a film with as much plot as Tallulah can't really be called a character piece, the precision and depth with which the characters are drawn makes it feel like one. Page, Janney, and Blanchard are all wonderful as the three women at the center of the film's powder keg situation and Heder doesn't sell any of them short. The relationship that develops between Tallulah and Margo is never an easy one, but it builds in complexity from one scene to the next so that you believe that that connection - which neither woman really wants, at first - has been forged in fire by the end, and the film is full of quiet scenes (including one between Janney and Blanchard that so perfectly hits the right notes that it avoids seeming contrived) in which the characters, all of whom are far from perfect, just try to understand each other as human beings and see things from another perspective. Tallulah makes it easy to invest in the characters, and it's a solid little winner of a film.

Next in the Marathon: Special Correspondents
Posted by Norma Desmond at 8:00 AM