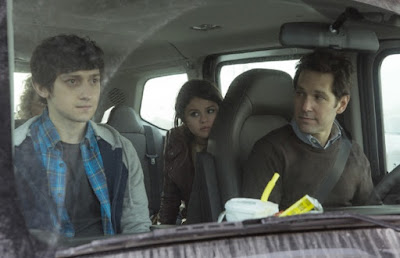 If Tallulah is the best movie I've watched during this marathon, then The Fundamentals of Caring is the most surprising. It was a hasty addition to the list, and I didn't have much in the way of expectations of it. Everything about it (including the generic title) makes it seem like the sort of movie you've already seen a hundred times, where people have to come to terms with things and help themselves by helping someone else, and the sensibility is just a bit on the quirky side. This one even has a road trip giving shape to its narrative, to boot. There's nothing groundbreaking, or even really particularly notable, about The Fundamentals of Caring, but it's an enjoyable watch. To be sure, it's the sort of movie that you can just relax into and not think about too much because it's going to hit all of the expected beats at exactly the moments it's supposed to, but it's a good movie of its type, funny and warm and mostly earning those feel good moments.

Ask, Listen, Observe, Help, Ask again. It's ALOHA, the guiding principle of caregiving as Ben (Paul Rudd) learns when he decides to embark on a job as a caregiver, having given up writing in the wake of the family tragedy that has also cost him his marriage. After taking the training course he applies for a job with Elsa (Jennifer Ehle), who needs assistance for her 18 year old son, Trevor (Craig Roberts), who has Duchenne muscular dystrophy. Although inexperienced, Ben proves to have just the right temperament to deal with Trevor, who enjoys playing fun pranks like pretending that he's choking to death and going out of his way to try to embarrass Ben in public during the one outing he goes on during the week. The rest of his time is spent around the house adhering to a strict schedule of watching TV and eating exactly two things (waffles and sausages) at precise times throughout the day. The TV that he watches seems to center largely on American roadside attractions, which he marks out on a map as if planning a trip. When Elsa is required to go away for a week for work, Ben decides to take Trevor on the trip (technically it's Trevor's idea, but he only suggests it because he's sure that Elsa will say no), during which time they manage to pick up a a young woman (Selena Gomez) making her way to Denver and a pregnant woman (Megan Ferguson) trying to make her way to Idaho, and are forced to confront the issues in their respective pasts which are determining their present situations.

For those interested in taking inventory: is Ben haunted by an event in his past which the film depicts in vague snippets until the third act, when it's finally revealed in full at exactly the moment Ben achieves a kind of clarity? Yes. Is Trevor's prickly exterior hiding an intense vulnerability that only Ben can get to? Of course. Can Trevor's estranged father be found with just a slight detour to the route that he and Ben have plotted out? You bet. Will the Gomez character's cuteness be offset by her foul mouth, which will in turn be offset by her inherent kindness and ability to see beyond Trevor's disability to the person he really is? And will she also draw him out of his shell and help him see that the world around him is worth participating in? There'd be no reason for her to exist in the narrative if she didn't. Will the pregnant woman give birth at an inopportune time and will Ben be called upon to assist, allowing him a shot at redemption? A film like this couldn't possibly resolve itself without that.

Yet while it's all just a little bit familiar, the film has enough humor and spends enough time developing the friendship between Ben and Trevor to make it all worthwhile. There's an element of transference to their relationship, with Trevor finding in Ben a father figure to replace the father who abandoned him as a child and Ben finding in Trevor a son figure to replace the child that he has lost, but the film's open acknowledgment of that, and the way that it folds it into the fabric of the pair's semi-regular conflicts, keeps it from seeming too precious about it. Although the details of the tragedy in Ben's past, which looms over everything in his present, are kept somewhat secret for most of the story (albeit in a way that's easy to guess at), The Fundamentals of Caring is really an open book in terms of what it's doing. It isn't just crafting this very specific dynamic between Ben and Craig, it's essentially telling you that it's doing it and turning whatever subtext there might have been into text. I think that it's that openness that ultimately won me over. This is a film that knows what it is and is comfortable travelling in its lane, not pretending to be more profound and artful than it actually is, content instead to just connect the dots and be entertaining while it does so.

Of course, it's pretty hard to go wrong with Paul Rudd, an actor whose easy charisma and everyman charm makes him reminiscent of Tom Hanks in his romantic comedy mode. Like Hanks, Rudd is also able to take that charisma and turn it down slightly to suit a dramatic role that requires a touch of melancholy, though he's had fewer opportunities at dramatic roles than Hanks. As Ben, Rudd is playing a man who is just emerging from a period of self-exile, dragging himself out of a state of depression in order to rejoin the world and experiencing the pains of the process, and he delivers a wonderfully nuanced performance. As Trevor, Roberts delivers a similarly great performance and the two men make great foils for one another, switching back and forth between being the straight man and the comedian in any given scene. The journey that the two characters embark upon may not contain much in the way of surprises, but the two central performances and the unforced direction of Rob Burnett make it an easy film to embrace nevertheless.
Posted by Norma Desmond at 8:00 AM