Netflix Originals Marathon: I Am the Pretty Thing That Lives in the House (2016) 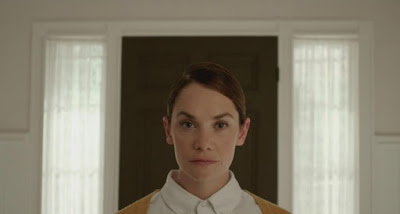 I think that I Am the Pretty Thing That Lives in the House would likely make a good novel. It doesn't just have a literary vibe, it has a very specific Victorian Gothic feeling to it that makes it feel like an atmospheric throwback to a time when horror was more about leaving one feeling unsettled than about vivid and explicit depictions of gore. If I were reading I Am the Pretty Thing That Lives in the House, I'd probably be pretty into it. A lot of what it's doing would work pretty well in a novel. As a film? Well, it's actually kind of boring, which is something that you should really never be able to say about a film that only runs for 87 minutes. While Oz Perkins' second feature is definitely big on atmosphere, there's just not a lot of payoff.

I Am the Pretty Thing That Lives in the House is a ghost story within a ghost story. Its protagonist and narrator, Lily (Ruth Wilson), announces in the opening minutes that she is 28 at the start of this story and will not live to turn 29. She's a hospice nurse who has come to live with and care for Iris Blum (Paula Prentiss), a prolific author of horror novels who has made it a condition of her care that she be allowed to remain in her own home until her death. Despite living with Iris for nearly a year, Lily never quite settles in and becomes increasingly distressed while living there as a result of the isolation of the place, the development of a strange patch on the wall that she thinks could be mold, the knowledge that the original owners of the house disappeared on their wedding night, and the fact that Iris keeps talking to someone named "Polly," which happens to be the name of the main character from her most famous book, which was written as if told to the author by the ghost of the protagonist herself (if Lily is at all disturbed by the fact that one of the chairs in the kitchen is perpetually found hanging upside down from the ceiling, she doesn't mention it). As the months creep by, Lily learns more about the presence in Iris' life and begins to approach her own end.

I Am the Pretty Thing That Lives in the House is a film that feels like it's gotten all dressed up with nowhere to go. It nails the tone, immediately establishing an unnerving atmosphere and then sustaining it right up until the end, but there's not really a lot of story being built along with that tone. Lily arrives, she becomes curious about Polly, she read Iris' book and learns Polly's story (except for the end, which the book leaves out because Polly couldn't put it into words for Iris), she meets her own end. That's pretty much all there is to it. While Polly makes her presence in the house known, appearing both invisibly to do things like yank a corded phone out of Lily's hand and visibly to show herself to Lily, in addition to being established as an absent presence who once was in regular contact with Iris, who is distressed that she no longer speaks to her, her role as a ghost does not particularly lend itself to compelling storytelling. She's not a malevolent spirit looking to cause havoc and she's not a peaceful spirit simply wanting to tell her story to Lily (having already told her story to Iris). She's just sort of... there and whatever it is she wants from Lily is left kind of vague.

There's certainly something to be said for taking an unconventional approach to a genre film, forgoing things like jump scares and explicit depictions of horror in favor of the power of suggestion and developing an intensely insidious feeling of something being off, but Perkins, who wrote the film in addition to directing it, just can't sustain the story in the same way that he can sustain the ambiance. The film's minimalist style works in terms of establishing the tone, with the film's one location and essentially lone character (since Iris hardly interacts with her and the only other living character in the film, the manager of Iris' estate played by Bob Balaban, only shows up a couple of times) create a sense of isolation and claustrophobia, but when you combine that with a minimalist story that is driven (if such a word can properly be applied here) by Lily's desire to find out more about Polly, yet which leaves her ill-defined to the audience, the result is more tedious than it is tantalizing.

Bear in mind that when I say all this, I'm not speaking from the perspective of a horror aficionado. When I say that I find it "boring," it's not because I like movies with scenes that are bathed in blood and that revel in showing the most horrible things the director can come up with. I actually prefer the subtler kind of horror movies that play with tension and subvert expectation and suggest more than they show, and yet I still felt restless enough watching this one that I started looking at the time about 30 minutes in and didn't stop until the end. There are things about it that I liked, such as the writing style of the voiceover (which is why I think it would make a good book) and little touches such as the iris shots at the beginning which help establish the throwback feeling of the piece, but it's not a movie that I would want to sit through a second time.

Next in the Marathon: Mascots
Posted by Norma Desmond at 8:00 AM