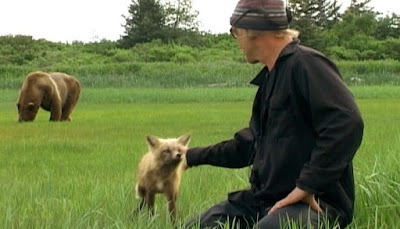 “I believe that the common denominator of the universe is not harmony, but chaos, hostility, and murder.” With a point of view as bleak as that, Werner Herzog may, at first glance, seem like an odd fit for the story of the inherently optimistic Timothy Treadwell, a man who spent 13 summers camped out in Katmai National Park and believed that he had a special connection to the bears and other wildlife that make their home there. But Herzog is no stranger to stories of crazy dreamers, men battling against the world itself and trying to harness the power of nature in order to remake it according to their own design. In this respect, Herzog is uniquely suited to telling this story, which ended in tragedy in 2003 when Treadwell and his girlfriend, Amie Huguenard, were killed and partially eaten by a bear, a finale captured by Treadwell's ever-present video camera but which exists only in audio form, due to the lens cap being on. Assembled from some of the footage that Treadwell captured, Grizzly Man is a film about nature’s majesty and man’s hubris, a story of one mad filmmaker as told by another mad filmmaker.

In the footage that he shot, Treadwell acts as both the director and star, usually setting up his camera and then stepping in front of it to provide his testimonials about his experiences on that particular day, his observations of the bears often in the background, and his general thoughts and feelings about nature, himself, and the world. He feels bonded to the bears, whom he names and frequently gets ridiculously close to (close enough that, in a few shots, he can touch them), but alienated from human society which he sees as uncaring and selfish when it comes to nature. Most importantly, he does not just see himself as one man fighting on behalf of the bears, but as the only man doing so. Though he eschews the notion of himself as a celebrity in one of his confessionals, it's also fairly clear that he sort of got off on the idea of being a kind of "bear whisperer" who could commune with the grizzlies in a way no other man could, and that his dislike of his status as a minor celebrity had to do with the way it attracted others to Katmai, tourists who wanted to see what he was doing up close. It was important to him that what he was doing was something that only he could do, and that he be seen as doing it entirely on his own. His videos emphasize his total isolation from society, the fact of him being the lone human but not being alone thanks to the presence of the bears and other wildlife, including a fox who takes to him like a dog to its owner. In truth, there were various periods during the 13 summers in the bush where he did have human company in the form of Huguenard or other female companions, but these women are not present in his footage, their absence a skirting of the truth to aid in his efforts at self-mythology.

In the interviews that Herzog conducts with Treadwell’s friends, family, people he dealt with from the Parks service, and the people who had to deal with the aftermath of his and Huguenard’s death, Treadwell emerges as both hero and fool. Those critical of him cite the fact that the intimacy of his contact with the grizzlies normalized human contact for them, which could in turn make them vulnerable by rendering them unafraid of humans, and of course the danger, ultimately realized, of getting himself killed and getting Huguenard killed as well. But those who wish to celebrate him see the nobility of what he was trying to do and Herzog himself expresses admiration for Treadwell’s abilities and fearlessness as a filmmaker, gathering amazing wildlife footage that a person more concerned with their personal safety would probably not attempt (though Herzog, a man who once got shot during an interview and then dismissed the resulting abdominal wound as being not “significant,” might himself be crazy enough to try). Although he does not share Treadwell’s cheerfulness and positive attitude, he does share Treadwell’s sense of wonder at the power of nature, albeit in a dark and merciless way that understands that that power can never be contained by man but that man will continue trying nevertheless.

Ultimately Herzog, who inserts himself into the proceedings so prominently that he’s almost as important a figure as Treadwell himself, is not interested in debating whether Treadwell’s story is one of inspiration or folly. He sees elements of both in the tale, the horrifying aspects inescapable as a result of Treadwell and Huguenard’s deaths – the audio of the recording is never played; instead Herzog shoots a scene of himself listening to the recording via headphones while the camera focuses on Treadwell’s friend, Jewel Palovak, watching Herzog and becoming visibly upset by the intensity of Herzog’s reaction. It’s more effective (and, of course, respectful) than playing the audio could have been, and it’s easily the most affecting scene in the film for the way that it highlights the impact of Treadwell’s fate. Some might dismiss the man as an idiot who got what he deserved (to paraphrase one of the people interviewed), but to others he was a beloved friend, dearly missed – while also acknowledging that Treadwell’s determination to live life on his own terms, regardless of the danger he was putting himself in, allowed him to leave behind something special in the form of the footage that he was able to capture. Over the years Herzog has brought many madmen, driven by impossible dreams, to the screen; Treadwell is easily one of his most fascinating.

Posted by Norma Desmond at 5:15 PM