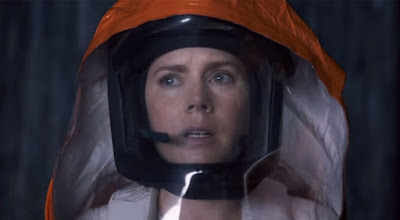 "We need to talk to each other." At a time when society seems more divided than ever, when not only do the left hand and the right hand not seem to know what each other is doing, but can't even seem to fathom that they belong to the same body, this may be the most relevant line of film dialogue in 2016. A great human drama couched in a science fiction thriller, Arrival is both a fantastic entertainment and the kind of introspective piece of work that keeps you thinking about it for days afterwards. To my mind this is the best of director Denis Villeneuve's English-language films, the closest thing he's made to a masterpiece since his trio of great French-language films Maelstrom, Polytechnique, and Incendies. Anchored by a wonderful performance by Amy Adams, Arrival is one of the season's must-see films.

Adapted from the short story "The Story of Your Life" by Ted Chiang, Arrival centers around the sudden appearance of twelve extraterrestrial spacecraft that appear at seemingly random spots throughout Earth. As part of their efforts to deal with the spacecraft which has landed in the United States, the government recruits linguist Louise Banks (Amy Adams) and theoretical physicist Ian Donnelly (Jeremy Renner), who will make up part of the team that makes contact with the aliens - which they call "heptapods" - and attempt to communicate with them to discover what their purpose is on Earth and whether they are friendly or aggressive. Around the world other governments are attempting the same thing and information is being shared between them, though attitudes about how to deal with the aliens varies. People, both in and outside of the government, are in a state of panic, assuming the worst, and the longer that Louise and Ian take to figure out how to communicate with the aliens, the more anxious the US government gets and the more prepared to take an aggressive stance. When the Chinese government decides to attack and then goes dark in their communication with the other sites, causing each site to systematically go dark as each government decides that they're in it alone and can trust no other, Louise finds herself in the position of having to convince the entire world to stand down before destroying itself.

As Louise is grappling with the task of both understanding the aliens and keeping the people with the decision making power from doing something irrevocable, she's also haunted by memories of her daughter who died during adolescence of a genetic disease, memories which may hold the key to Louise being able to avert disaster. Though Louise's memories of her daughter seem, at first, only tangentially related as a means of characterizing Louise as someone who has lost everything and must work through catastrophe in order to rediscover a purpose in life (sort of like Sandra Bullock's character in Gravity), Arrival is actually playing a different kind of game and, although the reveal telegraphs itself before it's made explicit, it proves to be one of the most poignant parts of the film. It reminded me of Slaughterhouse-Five, where the protagonist is abducted by aliens who experience time in four dimensions, although the film seems more unresolved about the existence of free will than the novel is, suggesting that Louise still has the ability to make choices and decides that certain things are worth doing, even if aspects of them are painful.

Arrival is a thoughtful film that tackles big questions in a way that feels unpretentious and mixes in elements of mystery, thriller, and even touches of comedy. Although science fiction as a genre is generally known for its chilliness, its focus on the intellect over the heart, Arrival has a strong emotional core and a degree of warmth that isn't quite common to the genre (and may have something to do with its protagonist being a woman). While there is a degree of remove between the humans and the aliens - a literal, physical remove for much of the film via a partition, but also the remove created by their different means of communicating - the aliens emerge as distinct enough characters to make Louise and Ian's relationship with them feel as important on an emotional level as it is on a narrative level, and watching as Louise and Ian figure out how to communicate with them is fascinating. The task seems impossible at first glance, but the film's focus on how language, both written and spoken, is expressed, the subtleties of it, and how an understanding of language can alter ones understanding of the world itself, makes the gap that needs to be bridged feel smaller. Arrival is all about communication, about the need to do the work and understand the other side rather than rush to a preemptive attack based on an uninformed judgment rooted in fear, and in that sense it couldn't feel more timely.

Arrival is deeply compelling on a narrative level, but it's strong in its production elements as well. Though it obviously involves a massive amount of CGI, the effects are unobtrusive and are well-blended with the people and things that are really physically in the space in any given scene, and the sequence where Louise and Ian first enter the alien spacecraft unfolds in a way that effectively mixes both wonder and fear as they enter this strange new space where all of the rules they're accustomed to no longer apply. But ultimately, for as much skill as Villeneuve (with the assistance of cinematographer Bradford Young, editor Joe Walker, composer Johann Johansson, and production designer Patrice Vermette) demonstrates as a storyteller, it's Adams' performance that holds the film together and successfully navigates the two storylines that unfold concurrently before finally coming together. While the exact circumstances of the story's resolution are maybe just a little silly, the viewer is invested enough in Adams' character that that doesn't really matter. Her performance here confirms that she's one of the best actresses working today, if any such confirmation was actually needed.
Posted by Norma Desmond at 3:52 PM