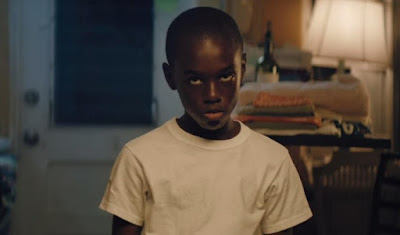 The protagonist of Moonlight exists in a space of silence. Told at one point that only he can decide who he's going to be, he faces the additional challenge of having to navigate the fraught terrain of identity without the assistance of a language with which to define it. He can only understand it in the negative: what he shouldn't be, what it's unacceptable to be, what it's dangerous to be. So he remains silent most of the time, searching for a space in which he can belong or for a way to belong in the space he's currently in, a desert of outward expression. Directed by Barry Jenkins, and adapted by him from Tarell Alvin McCraney's play "In Moonlight Black Boys Look Blue," the film is a vision of restraint, and somehow the more restrained it is, the more compelling it is - right up until the end, that is, when the floodgates finally open and the film achieves a breathtaking level of catharsis. Moonlight is a film that's going to come up a lot in the coming weeks as the year-end awards and nominations are given out, and it deserves every bit of the adulation it's about to get.

Moonlight is told in three distinct chapters, each visiting its protagonist at a key moment in his life and the development of his identity, each named for him. The first chapter is "Little," after the nickname given to him (Alex Hibbert) on account of his small, slight stature and his quiet personality. Picked on by the other kids in his neighborhood, with the exception of his friend Kevin (Jaden Piner), and emotionally abused by his mother (Naomie Harris), he finds solace when he's taken under the wing of Juan (Mahershala Ali) and his girlfriend Teresa (Janelle Monae). Though Juan and Teresa provide him with the gentle, emotional support that he needs and give him a place to wait things out when the situation at home is particularly rough, his relationship with them is complicated by the fact that Juan is a drug dealer and that the product he's putting out is making it into the hands of Little's mother, who is beginning to lose herself to it.

The second chapter is "Chiron," his given name and what he goes by as an adolescent (Ashton Sanders), now struggling with the loss of one of his parental figures, as well as with his mother's full descent into drug addiction. The elements of his personality which made him an object of ridicule to his peers when he was a child now make him an object of intimidation by classmates who see him as weak and worthy of scorn, and though he still has something of a friendship with Kevin (Jharrel Jerome), he seems mostly alone. This changes one night when he runs into Kevin at a beach and has an experience which opens up a world of possibilities, but which is almost immediately followed by an act of violence that leaves him shattered. The next time he (Trevante Rhodes) and Kevin (Andre Holland) meet, they're adults. This third chapter, called "Black" after the moniker Chiron has adopted as part of a reinvention which includes bulking up and learning how to play the "role" he's been seeing modeled for him since childhood, unfolds as if a dream of a promise made and finally realized.

As told by Jenkins, Moonlight is poignant to the point of being piercing as it explores the intersectionality of its protagonist and how the elements of his identity - his race, his class, his sexuality - seem to work against each other to deny him any place in society. It's reminiscent of Dee Rees' 2011 masterpiece Pariah, which was about a young black woman realizing her sexual identity and struggling to find the ways and means of expressing it, and, to a lesser extent, last year's Carol, a film that like this one was very much about the things that couldn't be said out loud. There are various ways you might describe Chiron - as black, as poor, as gay - but what ultimately defines him is his stillness and his silence, the way that other characters try to engage him and how, in that space where he would offer a response, there's only a long stretch of anticipation, as if he fears that just by speaking he will betray himself. The older and bigger he gets, the more he comes to understand the world around him, the more that silence consumes him. He's able to express himself more as a child (who, having been called a "faggot," asks Juan what the word means and then asks if he is one) than he is as an adult, and it's amazing how much more vulnerable he seems as an adult, shy and tentative in a way that stands in stark contrast to his physical appearance, than he does as a child.

Moonlight is beautifully told, but it's also beautifully acted. It's impossible to single out any of the three actors who plays Chiron through the course of the film, as each brings something essential and stirring to the role and each is tasked with carrying moments that make the viewer's stomach tighten with anxiety, effortlessly inspiring empathy. They're well supported by the rest of the cast, with Ali as the conflicted Juan and Harris' complex turn as Chiron's mother, who runs roughshod over him through his childhood and then in the final chapter must contend with the fact that she has to lay in the bed she's made, standing out in particular. It's a film without a single false note and it's moving in a way that leaves you unaware, at first, of just how much it has affected you. It's one of the best films of the year.
Posted by Norma Desmond at 8:00 AM