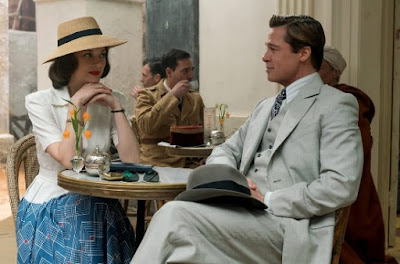 Allied is one of the most beautiful looking films of the year. Meticulously assembled and working very hard to evoke a more classical style of movie storytelling, Allied is a different kind of film than those that populate the multiplex these days, though I wouldn't quite agree with critics who call it "old fashioned" or a "throwback" to the films of the 1940s. It draws its inspiration from films of the past - borrowing visually from David Lean (but also from the not-so-old The English Patient), a little bit from Casablanca, and structuring its second half like a noir - but its sensibility is too modern for it to properly be called old fashioned. The sex is too explicit, the violence is too explicit, and its depiction of WWII servicemen and women as surrendering to a "we could die at any moment so anything goes" hedonism is definitely outside of the realm of any old school film. It exists somewhere in between the movies of yesteryear and the movies of today and though it's not flawless in every step it takes, it succeeds in being entertaining.

The film opens with what is arguably the greatest character introduction Brad Pitt has ever enjoyed in his career, literally descending into the frame as his character, Max Vatan, a Royal Canadian Air Force Wing Commander, parachutes into the desert of French Morocco. It's shot in breathless and breathtaking fashion, lovingly crafted by director Robert Zemeckis. Max is met by a contact who drives him to Casablanca, where he meets Marianne Beasejour (Marion Cotillard), a member of the French Resistance and his partner in the mission to assassinate the Nazi ambassador. The two spend a few days posing as husband and wife as they prepare to spring their trap, Max insisting early on that they shouldn't get sexually involved, his resolve melting away as he and Marianne get closer to mission time and contend with the unlikelihood that they will walk away alive. However, they do emerge alive, having successfully assassinated the ambassador and other local Nazi officials, and she returns with Max to London, where they marry and she gives birth to their daughter. Despite the war going on around them, Max and Marianne create a happy life together, but that happiness comes to a halt when Max is called in to a meeting with the SOE, who tell him that Marianne is actually a German spy. Max refuses to believe it and as the SOE lays a trap for Marianne, Max works to prove his wife's innocence.

Written by Steven Knight, the story of Allied splits almost evenly in two. The first part concerns the adventure in Casablanca, which is so well-wrought that it could have been a whole film unto itself, and a compelling romantic thriller at that. The second is the half of the story that takes place in London and in which Max is left to wonder if he's been a victim of intimate betrayal, which has its compelling moments but ultimately leaves the film written into a corner. There are only three ways this plot can resolve itself (she's innocent, she's guilty, or the having it both ways resolution of she's guilty but with good reason), which results in an ending that is destined to feel perfunctory and fall just a little bit flat. The story ends with a fizzle, which is unfortunate since it starts with so much pop and promise.

George Clooney is often referred to in the media as the last "movie star" in the classic sense (Time Magazine even featured him on its cover in 2008 making that very declaration) and compared to Cary Grant, but it occurred to me while watching Allied that Pitt can just as easily lay claim to both the comparison and the distinction. There's something timeless about Pitt's image on screen, about the ease with which he blends into the period setting (if the film was in black and white, he wouldn't seem at all out of place) and the way that he carries himself on screen. Cotillard also equips herself well in the film, her heady mix of sultriness and vulnerability reminiscent of the femmes fatale played by Rita Hayworth. There's a certain simple pleasure to be had in watching two stars - neither really challenged by the material, yet still making it look more effortless than it actually is - in a drama that sweeps them from one exciting set piece to another, those pieces so perfectly crafted on a production level that you find yourself wanting to just wander around in the sets. It may be superficial, but it works.

There are also things about Allied that don't really work - this doesn't include the ending, which is tinged with inevitability; the problem isn't that it doesn't "work," or maybe the more appropriate word would be "fit," the problem is that it's lacking in imagination - and feel sort of jarring and unnecessary. For example, Max's sister, Bridget (Lizzy Caplan), is also in London as part of the RCAF and is openly, flagrantly lesbian. The open affection between her and her girlfriend feels anachronistic (although perhaps was not, if there's truth to the character's throw away line that the one good thing about the war is that everyone is so afraid they're going to die at any moment that no one cares what anyone else is doing), but more importantly the character serves absolutely no purpose to the narrative. If you excised her completely, it would affect nothing in the story. As far as I can tell, she only exists to demonstrate that even in the 1940s drunk guys thought lesbians were there to make out for their entertainment. There are other weird little touches that make the film feel anything but "old fashioned" and which jolt the viewer out of the story, even if only momentarily. Yet, even with a few strange choices and things that feel out of place, Allied is ultimately an entertaining film of the type that may not challenge, but is appealing just for what it is.
Posted by Norma Desmond at 6:08 PM