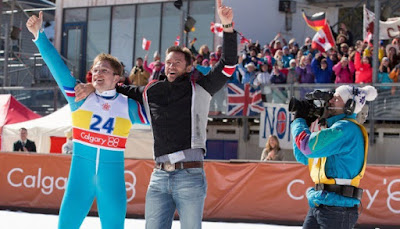 There are two ways of looking at the story of Michael "Eddie the Eagle" Edwards. One is as a heartwarming tale of someone whose spirit is so pure that it doesn't matter to him whether he finishes first or last, just so long as he's able to participate and compete. To a certain degree, that's what the Olympics are supposed to be about: the love of sport for the sake of sport. The other is as a slightly more cynical story about someone seeking to bask in the glory of the greatest athletic competition in the world and who discovers a loophole that he can use to his advantage in order to get there, who doesn't care if he finishes first or last because his passion isn't for any sport in particular, but for the idea of being part of the "Olympics." This being a film, and being very much in the grand tradition of uplifting sport movies, Eddie the Eagle opts for the first kind of story, and that's just fine. It's a very good film for the kind of film that it is - it's funny, warm, and feelgood - but it never strays outside the confines of the playbook.

Growing up, Eddie is a kid with a dream of going to the Olympics and the drive to get there by any means possible. While his mother is encouraging, his father would prefer that he come down to Earth and start learning a trade so that he'll be able to support himself. Undeterred by his father's lack of support, or by his own lack of athletic success, he keeps trying, jumping from one athletic discipline to another as he tries to find one that works. When he hits his teens, Eddie (Taron Egerton), has an epiphany and decides to stop pursuing summer sports, reasoning that he'll have an easier time getting to the Olympics if he starts playing a winter sport (don't ask why he thinks a winter sport will be "easier" to master when pretty much everything is more difficult when it's done on ice). He takes up downhill skiing and actually finds some success, but is rejected by the British Olympic Association and cut from the team. Desperate to get to the 1988 Games, he does some investigating and learns that he could go as a ski jumper and packs up his possessions, heading to Germany with the intention of learning how to jump and getting good enough to qualify for the Olympics, all within a year. When he gets to Germany, he enlists the help of former Olympian Bronson Peary (Hugh Jackman), an alcoholic who wants nothing to do with him but is eventually won over by his sheer determination.

Written by Sean Macaulay and Simon Kelton and directed by Dexter Fletcher, Eddie the Eagle is a film so sugary sweet that you're as likely to end up with a toothache at the end as anything. It delights in a depiction of Eddie as a lovable young man doggedly pursuing a dream and whose naivety - like, for example, successfully completing the smallest jump (15-metre) on his first try and then immediately deciding that he's ready to move on to the next jump (the 40-metre) without any further training or practice - is played as comically endearing rather than recklessly stupid. While it's certainly admirable for someone to give their everything to something and to engage it with a level of fearlessness that most of us would not possess, the naysayers around Eddie aren't exactly wrong when they voice their objections to what he's doing. A sport like ski jumping isn't something that you take up on a whim, and it's not something that you can master within a year in order to compete at the Olympic level. It's dangerous if not done properly and Eddie's methods, which consist pretty much entirely of buying the equipment and then throwing himself down a hill without having any training or real understanding about what, exactly, he needs to do, are more likely to get his neck broken than get him to the Olympics.

Eddie does, in fact, get pretty badly injured as he learns the sport - bad enough that Bronson, who works as a snow groomer, agrees to give Eddie some lessons because he knows that Eddie isn't going to quit trying and he'd prefer not to have to clean up the course after Eddie kills himself trying to make the biggest jump (the 70-metre) - but the film sees this more as an example of his indomitable spirit than as an example of him having bitten off more than he can chew. So he continues training and enters the competition circuit with Bronson by his side and actually manages to qualify even after the BOA raises the bar for qualification in an attempt to keep Eddie from competing (both because of the cost of bringing an athlete to the Olympics, particularly one who has no chance to medal, and because the head of the BOA doesn't think Eddie fits the "image" that the team wants to project). It's here that the film makes a feint towards taking another perspective on what Eddie's doing, having Bronson argue that even though he's technically qualified to compete at the 1988 Games, he should forgo the opportunity so that he can train properly over the next few years and compete at the next Winter Games as someone who might actually be able to challenge for a medal, and going so far as to say that it's what Eddie should do if he actually has respect for the sport. But instead of using this moment as commentary on what Eddie is doing - preferring the immediate satisfaction of being at the Olympics to the long-term satisfaction of dedicating himself to the sport and becoming a world-class athlete - it's used to cause the rift between coach and student that ends the second act and kicks off a third act where Eddie realizes that he is a little bit in over his head and Bronson, inspired by Eddie's purity, returns to the stage that he had previously left in disgrace.

And yet, while the "villains" might have a decent point, and while the film unfolds in a by-the-book fashion, it's hard to root against Eddie or Eddie the Eagle. Part of that is because the film is just so indefatigably upbeat that it will win you over just as surely as Eddie will keep getting up and making another try at a jump; and part of that is the performances. Egerton doesn't bear much actual resemblance to the real Edwards (and the constant jutting out of his jaw in attempt to bridge the gap in resemblance starts to seem overly mannered after a while), but he's able to imbue the character with a kind of uncomplicated earnestness that makes you wish him well even as you shake your head at the utterly insane things that he decides to do. Jackman, meanwhile, is playing a standard issue role as the grizzled coach haunted by his own failures, but he does it well and he's exactly the kind of actor who can pull off a scene where his character drunkenly decides to show off by jumping the 70-metre and then does it while lighting and smoking a cigarette. Eddie the Eagle doesn't break any ground, but it's the kind of easy, undemanding entertainment that can be enjoyed by the whole family.
Posted by Norma Desmond at 8:00 AM