#10: Chinese restaurant scene, Kumiko, The Treasure Hunter
Kumiko, The Treasure Hunter is the story of a troubled Japanese woman who believes that the movie Fargo tells a true story and that if she follows the clues laid out in it, she can find the money that Steve Buscemi's character leaves buried in the middle of nowhere. It's a film that aims for the same dark humor as its inspiration and no scene in it hits that note stronger than the one in which the befuddled police officer who finds Kumiko wandering the highway decides that, since they can't effectively communicate with each other because he speaks no Japanese and her English is limited, he'll take her to a Chinese buffet, reasoning that someone there must be able to speak Japanese because... well, needless to say he didn't really think that through, but the exchange between him, Kumiko, and the woman who runs the buffet is worth every second.

#9: "Artists lead," Steve Jobs
Steve Jobs is made up of conflicts between Jobs and many people, but it's his battle with Apple CEO John Sculley, his friend and supporter in the film's first sequence, but the man who ousted him from Apple by the second, that makes for the film's most engrossing scene. Bringing the two back together in 1988 as Jobs is preparing to launch NeXT, the film flashes back to the circumstances which resulted in the disintegration of their relationship and the rainy night when Sculley told the Apple board that they would have to choose him or Jobs. The back and forth between actors Michael Fassbender and Jeff Daniels carries the scene, but it's the visually dynamic way that it unfolds that makes it so memorable.

#8: "Just surprise me," The Duke of Burgundy
The Duke of Burgundy is the story of two women involved in a relationship where role play and BDSM feature prominently. While that may make the film sound salacious, it really isn't. Instead it's a rather thoughtful piece about the need for give and take in a relationship which can be surprisingly funny at times. In this particular scene one partner, who is already sort of grumpy because she's thrown her back out, becomes grumpier still when the other gives her notes for a "scene" that she's plotted out for them. "Just surprise me," she says... and then begins imposing rules to ensure that the "surprise" happens exactly when she wants it to. If they gave out awards for Best Performance as a Woman Losing Patience at a Dangerous Pace, Sidse Babett Knudsen would take it in a walk. 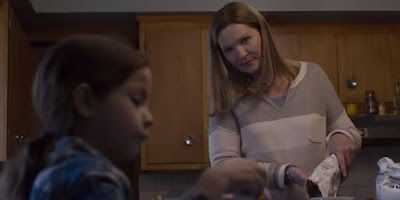 #7: Baking scene, Room
The key to Room is that it is told from the perspective of a character who, because he has spent his life with no point of reference other than the world of "room" and because his mother has gone to such great lengths to shield him from the fact that the way they live isn't normal or good, is unaware that he's lived a horror story. As such, he has a tendency to reveal bits and pieces about life in room without any understanding of how these revelations are being received by the listener. Such is the case in this scene where he does some baking with his grandmother, casually dropping bombs about what went on in room while she struggles to keep herself from outwardly reacting as she's confronted with information about what her daughter endured. Brie Larson has received a lot of praise as the Mother in the story, but Joan Allen is also excellent as her mother, particularly in her one-on-one scenes with Jacob Tremblay.

#6: Post-movie discussion, Clouds of Sils Maria
In Clouds of Sils Maria, Juliette Binoche plays an actress who considers herself an artist and, despite having starred in some big budget CGI movies herself, looks down on the superhero/action/science fiction genre. After checking out the latest 3D science fiction movie featuring the young starlet who has just signed on to co-star in her latest project, she and her assistant (Kristen Stewart) discuss the movie over drinks, with the assistant arguing that even films like that have value as art and require skill as an actor, that characters like that can have complexity and psychological depth. And as she makes her points, Binoche's character just cannot stop laughing. The scene is like the distillation of every conversation about the difference between "movies" and "films," cinema made for art and cinema made for commerce, and Binoche (who even does an excellent spit take at one point) and Stewart play off of each other perfectly.

#5: "Be a good guy," The End of the Tour
The End of the Tour is about the ever shifting balance of power between two men. Both are writers, one is famous and one is not, and at first it's the famous one who has the power in the relationship, because the other one is a fan and in awe of his success. But things do not remain that simple and later on, when the writer who is not famous appears to be making romantic inroads with the ex-girlfriend of the famous one, it gets under the famous man's skin to a degree that he can't hide, revealing a level of anxiety that suddenly puts the two men on an equal standing. Attempting to regain the upper hand (perhaps unconsciously) he implores the other man to "be a good guy" and back off, but all he really does is stoke the flames of rivalry by acknowledging that it exists, that he sees the other man as some kind of threat. Throughout the course of the story, The End of the Tour makes for a fascinating look at how men relate to each other, and this one scene encapsulates all that on a micro level. 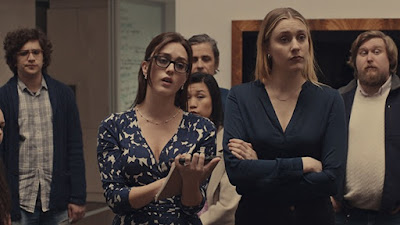 #4: The day trip sequence, Mistress America
Mistress America is a great film over all, but it's this long sequence where the characters - the protagonist, her soon-to-be-stepsister, her friend, and her friend's jealous girlfriend - head out of town to see the ex-best friend of the stepsister that takes the comedy to another level. After disturbing an angry neighbor by accidentally going to his house, and then crashing a book club meeting when they get to the right house, the comedic elements begin to pile on with great speed, quickly turning into a farce. It all culminates when a short story the protagonist has written is revealed to the stepsister, who recognizes herself and her life as its inspiration and is insulted by how she's depicted, and everyone (the stepsister, the friend, the friend's girlfriend, the stepsister's ex-best friend, her husband, the angry neighbor, and a very pregnant woman who is waiting to be picked up from book club) all begin picking apart the protagonist's motivation for writing such a story, turning the tables on her and making her the subject rather than the cool observer. That the film is not only able to sustain the level of comedy, but finds ways to keep raising it, makes this one of the best scenes in any film this past year. 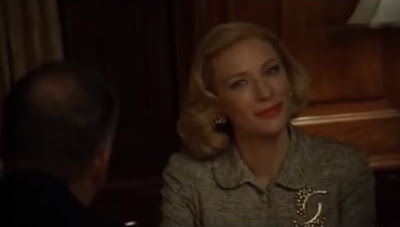 #3: Final scene, Carol
Everything comes full circle, and so it is with Carol. The final scene, which unfolds in a dreamy, beautiful fashion is both a wonderful, quiet act of defiance and self-acceptance by the two main characters, and a perfect reversal of the moment when the two first met. When they first meet, spotting each other across a crowded room, it is Carol who comes to Therese, who is confined by her place behind a department store counter. In the end it's Therese, having grown more experienced and mature as a result of what has happened between them, who walks towards Carol, who is confined by her place at a crowded table and has grown more vulnerable as a result of the changes in her life. Where they'll go from this moment is unknown, but it will no longer be a relationship between one partner who is more worldly and one who is more naive; now they will be something more like equals as they create a place where they can be together in a world that would just as soon deny them the right and see them parted. That is the promise of the final scene, which unfolds wordlessly and through cuts between the two women as they regard each other over the shrinking space between them. 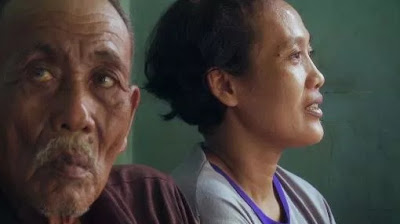 #2: The look of silence, The Look of Silence
The look of silence is the look on a woman's face as she hears her father explain just what sort of things he did during the Communist purges in Indonesia in 1965 and 1966. It comes after she's explained that, as a child, she was proud of her father having worked for the government to rid the country of its undesirable element and would brag about it to her friends, and once her father begins admitting to what, exactly, he did. His revelations are so gruesome that his daughter is stunned into horrified silence, finally agreeing that what he did was evil. You would almost feel bad for her were it not for the fact that she's sitting across the table from a man whose brother was a victim of the purges and who spends the entire film just trying to get the people who participated to acknowledge that it happened and take responsibility for their part in it. The Look of Silence is an incredibly powerful film from beginning to end, but this scene in particular packs an emotional wallop. 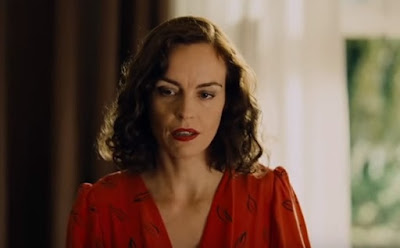 #1: "Speak Low," Phoenix
And speaking of emotional wallops, this final scene in the brilliant Phoenix is a real knock out. For the entire film, the protagonist, disfigured by the abuse she endured in a concentration camp and having undergone reconstructive plastic surgery which has left her looking like herself only in passing, has been desperate to get her husband to recognize her for who she is. By the time he finally does, however, it's too late, because she's come to see who he really is. It all happens in this scene, where he encourages her to sing a song that was a favorite of his wife's, and as she sings, it dawns on him that it's been her all along, just as it dawns on her that after everything he's revealed, he's now dead to her. It's brutal, devastating, and utterly unforgettable.
Posted by Norma Desmond at 8:00 AM

The baking scene in Room is one of my favorites as it play into Jack and his grandmother bonding with Jack slowly integrating himself into his new surroundings where he is able to open up to his grandmother. I also have to bring kudos to Joan Allen for playing a character that is full of warmth and understanding as the character could've been a cliche. Allen just sells that and more where I also loved how she treated Jack as just a normal child but slowly and then asks him if she could do something to him in a very maternal way.

I was really torn between this scene and another scene between Allen and Tremblay, the one where her character cuts his hair and he very casually tells her that he loves her. The way Allen plays that scene absolutely slayed me when I saw it. If it weren't such a crowded year in the actress categories (or, alternately, if there weren't so many clearly leading actresses being campaigned as supporting) I have no doubt that she'd be in the conversation for a Best Supporting Actress nomination.