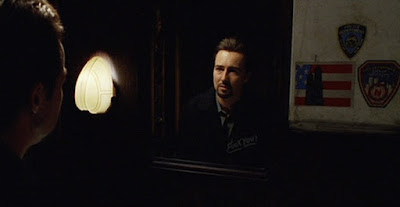 Spike Lee’s 25th Hour is one of those films that is at once a perfect snapshot of its time and the sort of film that is so vitally alive that its ability to move and speak to you is not in any way hampered by being removed from the context of its original release. We’ll never know exactly what this “day in the life” movie would have looked like if the events of September 11th had never happened; some of its strongest elements would no doubt have remained intact as it followed its protagonist during his last day of freedom, reconciling himself to what he’s losing and making peace with where he’s heading, but it may not have had the elegiac quality that it possesses by setting its story in the shadow of national tragedy. Lee can be a divisive filmmaker, but his is the perfect voice for this particular story and 25th Hour is one of his absolute best films.

Over the course of the film, Monty Brogan (Edward Norton) will live out his last 24 hours as a free man and then, on the 25th hour, turn himself in to begin a stint in prison for drug dealing. In addition to his worries about his ability to survive in prison, he’s contending with his suspicions about who turned on him, aware that only two people knew where he hid the drugs and drug money found during a raid by DEA agents: his girlfriend, Naturelle (Rosario Dawson), and Kostya (Tony Siragusa), a member of the Russian gang for whom he was dealing drugs. The gang is hosting a “going away” party for Monty that evening and he gathers Naturelle, who would much rather spend the time alone with Monty and get him to talk about what he’s feeling, and his friends Frank (Barry Pepper) and Jacob (Philip Seymour Hoffman) to join him. He also makes a visit to his father, James (Brian Cox), where he find himself with a moment alone in which he can vent his anger and frustration at everyone and everything before finally circling back to himself and delivering the judgment he ultimately cannot escape: “You had it all and you threw it away.” Whether someone turned him in or not, it’s his own choices that have brought him to this moment and now his life will never be the same again.

That monologue that Monty delivers to himself in the men’s room of his father’s bar is the verbal equivalent of holding New York City upside down and shaking it, then dissecting everything that falls out with the most jaundiced of eyes, letting no one escape judgment. It’s an angry, hate-filled rant that effectively sums up the incoherent rage that often follows in the wake of tragedy, and in Monty’s particular case, it’s the cathartic experience he needs in order to work through his grief and come towards acceptance for his situation. It’s a doozy of a speech, well executed by Lee behind the camera and Norton in front of it, one that is amazingly matched by another monologue at the end, when James imagines an alternative future for his son, one in which he does not go to prison. If nothing else, 25th Hour, which was adapted for the screen by David Benioff from his novel of the same name, possesses one of the richest screenplays of the last 15 years, one which gives the assembled cast plenty to sink their teeth into as their characters struggle to come to terms with a loss as they’re experiencing it.

That it also manages to seamlessly incorporate September 11th into the story only makes it stronger, using the event as a mirror for what’s happening in the story. Just as New York has become a city split into “before September 11th” and “after September 11th,” so too does Monty will become a man split into the time “before prison” and “after prison.” At its core, 25th Hour is a story about a definitive break between two eras, mourning what “was” and finding a way to accept what is about to “become.” Though the spectre of the attacks is everywhere – at one point the film pauses in Frank’s apartment, which overlooks ground zero – it isn’t directly about that event, which ironically makes it one of the best films made to date about September 11th, one that probably could only have been made by a filmmaker as synonymous with New York as Lee. Lee can be a heavy hand sometimes, but he brings a delicate touch here, trusting that just a few references to the attacks will be enough to underscore the themes of loss and transition. His direction is unobtrusive, steady, and disciplined as it methodically builds towards the film’s marvelous, mesmerizing finale. “It all came so close to never happening,” James intones at the end of his monologue. “This life came so close to never happening.” 25th Hour is about loss and the fragility of what we have, but it’s also about the small miracle of ever having had it in the first place, and Lee captures that truth beautifully in this haunting, wonderful film.
Posted by Norma Desmond at 8:00 AM