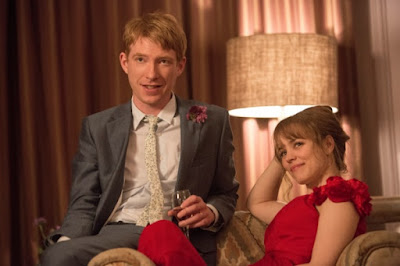 I seem to be one of the few people who is utterly ambivalent about Richard Curtis' Love Actually, a film which has inspired love and hate in equal measure depending on who you're talking to, so when his time travel romantic comedy About Time came to theaters, I took a hard pass (though I might have given it a shot had it come out earlier in the year; as movie buffs know, there's just too much to see in November and December of each year to not be a little selective). When it popped up in my Netflix recommendations, surrounded by a lot of films that I've already seen, I finally decided to give it a chance, and while I was perhaps just in the perfect mood for its inconsequential fluffiness, I found it to be rather winning. Objectively, it is definitely lacking in some respects as a narrative; subjectively, I found it delightful.

About Time is the story of Tim Lake (Domhnall Gleeson) who, when he's 21, is informed by his father (Bill Nighy) that the men in their family possess the power to time travel back to previous moments in their lives. Tim doesn't believe it until he tries it himself, using his newly discovered power to go back to a disastrous New Year's Eve party and live it over again in a way that doesn't result in him embarrassing himself multiple times over. Having discovered this ability, Tim's first thought is to use it to acquire wealth, something his father discourages by telling him that he's never met a happy rich person (which is odd because this family seems pretty rich, what with the big seaside house, and the ability to retire at 50 and still financially support multiple people who aren't working at all). Thus, Tim instead uses his ability to improve his love life and spends the ensuing summer falling in love with Charlotte (Margot Robbie), the friend of his sister, Kit Kat (Lydia Wilson), but ultimately learning that if the spark isn't there for both people, no amount of do-overs can make it happen. When the summer ends, Tim moves to London to begin his career as a barrister and become the boarder of his father's friend, Harry (Tom Hollander), a grumpy playwright.

In London, Tim meets Mary (Rachel McAdams), an American working for a publishing house, and the two hit it off. However, when Tim gets home after his initial meeting with Mary, he finds Harry in a state, his newest play having opened that night and potentially destroying his career as a result of one of the lead actors forgetting his lines. In an attempt to help Harry, Tim decides to re-do the night, going with him to see the play and coming to the actor's rescue. The play is a huge success but, because he spent the evening at the theater instead of meeting Mary, he's now lost her and has to find her again. When he does, he's disheartened to find that she now has a boyfriend, and has to travel back in time to the night when she meets the other guy at a party and ensure that she meets him instead. From there, the film follows Tim and Mary as they embark on a life together, eventually getting married and having children, with Tim being forced to reconcile himself to the things that time travel cannot change and coming to appreciate the real meaning of life.

There are a number of things about About Time that shouldn't work (and, I'm sure, that don't work for some viewers). For one thing, it actively avoids having anything even remotely resembling narrative tension, putting Tim and Mary together about a third of the way in and keeping them happily together for the remainder of the film. Boy gets Girl (or Girl gets Boy) tends to be the end game of a romantic comedy, and there's a feeling of treading water in About Time because it has nowhere left to go and spends the rest of its running time having Tim play around with time travel without fundamentally changing anything. Another thing is that it's really inconsistent about its own rules with respect to time travel: Tim's father tells him that he can only travel back in time to moments that he's lived, and yet Tim is able to go back in time and do things that he never did and go places that he didn't originally go. After he and Mary have children, Tim learns that if he travels back in time to a point before the kids were born, it will change the children, something he discovers after he returns to his present day and finds that his beloved daughter is now a son who is a stranger to him. He manages to bring his daughter back by going back in time again and then letting the day in question unfold in the same way it originally did, but then late in the film Tim and his father travel back to Tim's childhood to relive a happy day at the beach and it has no effect on Tim's children (despite the fact that whole reason that Tim and his father take this trip is that Nighy's character has died and Mary is about to have another baby, so Tim knows that he can no longer travel back to see his father because that period will now be a point before his new child is born).

The narrative is constructed in such a way that nothing really matters from one scene to the next. Even the potential tension that might arise from Tim's attempts to balance the ways he's been able to improve his own life against his desire to improve the lives of the people he loves come to naught, as mid-way through Tim finds himself having to choose between the existence of his daughter and helping Kit Kat avoid falling into a near-deadly depression by steering her away for the guy she meets at the horrible New Year's Eve party and towards his friend Jay (Will Merrick), who adores her. He chooses his daughter, but is eventually able to get Kit Kat and Jay together anyway so that everything works out for everyone. About Time is bizarrely uninterested in making things in any way emotionally complicated or difficult, and in letting every opportunity for an actual story glance off its surface. Yet, at the same time, it's a very charming film and even sometimes quite moving. It's not a typical romantic comedy, if anything it's more about the love between a father and son than a love story between a man and a woman, but if you're in the right mood for it, it's a pretty enjoyable one.
Posted by Norma Desmond at 8:00 AM