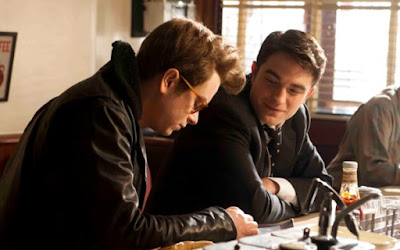 Before his first film (and the only one he actually lived to see released) even came out, James Dean was already on his way to attaining status as an icon thanks to the still images put out to promote him and which captured the restless, hungry cool which was just as vibrantly apparent on film. Some of those photos were captured by Dennis Stock, who ended up immortalizing what would be Dean's final trip home to Indiana, the pictures appearing in Life magazine just before the premiere of East of Eden. Anton Corbijn's latest film is about that trip and what would be the brief friendship between Stock and Dean. Like many biopics, it ends up feeling as if it just skims the surface of its subject, but in its languid way it nicely captures the potentially volatile relationship between the person on one side of a camera and the person on the other as they negotiate the ways and means of representation.

Life opens in 1955, when Stock (Robert Pattinson) is still a fledgling photographer mostly putting in his time at the press line of movie premieres and hustling for his big break, and Dean (Dane DeHaan) is fairly newly signed to Warner Bros., his debut film on the verge of release. Seeing something in Dean, who at the moment is best known for escorting Pier Angeli (Alessandra Mastronardi) to various events, Stock pitches the idea of doing a series of photos with him, but his initial pictures don't do much to excite his boss (Joel Edgerton). Meanwhile Dean, who has started to bristle at the amount of control he has had to cede to Jack L. Warner (Ben Kingsley), who makes it clear that working at Warner's means that one doesn't just star in films, but also allows Warner to shape a one's image and call the shots with respect to where and how one is seen in public, decides to take a trip home to Indiana before heading to New York for the premiere of East of Eden. He invites Stock to join him for what he initially says will just be a "couple of days" at his family's farm and Stock, still believing that Dean could make a compelling subject for a photo essay, agrees to go along with him.

It's while the two are in Indiana that things about each begin to come into sharper relief. Seeing the ease with which Dean relates to his young cousin, Markie, forces Stock to confront his shortcomings with respect to his own young son, whom he barely sees and has difficulty engaging with. Dean, meanwhile, is forced to contend with the fact that if he's going to be successful as an actor, then he has to make peace with the fact that he won't always be in control of his image, and also to acknowledge that those difficulties that he has in giving up control may having something to do with the fact that he's more than a little self-centered, as becomes evident when late in the film he expresses surprise at the fact that Stock has a son, despite the two having discussed Stock's son in earlier conversations. As their couple of days in Indiana stretch on, with Dean delaying in leaving, the two men find themselves increasingly at odds with each other but, in spite of that, they soon discover that the images that Stock has captured during their time together will be gold for both of them.

Although based on real events, with several scenes built around actual photos that Stock took, Life isn't really a biopic in the usual sense. For one thing, Dean, who is depicted as something of an enigma not necessarily because he's hard to understand, but because he hasn't quite fully settled on an identity for himself, isn't the center of the narrative. That role goes instead to Stock, a man whose face is often obscured by a camera, and whose role is ostensibly that of a passive observer. In actuality, however, Stock is very much shaping Dean's story by way of how he's photographing him and the film is less about one of Hollywood's most iconic stars than it is about the relationship between a photographer and their subject and the give and take that exists therein. The film is at its most successful when it focuses on that aspect, which is no real surprise given that Corbijn started his career as a music photographer and understands that kind of relationship from the inside out.

The film is less successful whenever it drifts away from that and whenever it separates the two characters. As the two men, DeHaan is solid as Dean, playing him rather differently than many other actors have in the past, eschewing the moodiness that is as much a part of the legend as anything, and playing him instead as someone who finds himself frequently abashed whenever he does something he wasn't supposed to do (which he does frequently, as pretty much every scene in which Kingsley appears involves his character dressing Dean down for one thing or another). DeHaan doesn't look much like James Dean, but the performance is sort of fascinating for the way that it brings the character down to earth and tries to make him just a regular guy who has maybe bitten off more than he can chew by going to Hollywood. As Stock, Pattinson takes yet another role that seems to be actively aimed at undercutting whatever heartthrob status was achieved via the Twilight movies. Although I don't think Pattinson is a particularly great actor, he seems at least to be trying to develop an interesting and varied career for himself, and his depiction of Stock as someone who doesn't quite know how to live except when he's behind a camera, is a good one. Ultimately, Life is too inconsequential a film to end up being much more than a footnote in the careers of Corbijn, Pattinson, and DeHaan, but it's a solid effort that mostly delivers on what it sets out to do.
Posted by Norma Desmond at 8:00 AM