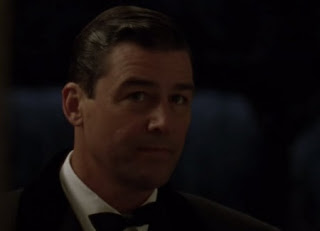 #10: Kyle Chandler, Carol
In a lesser film, Kyle Chandler's role as the husband of the eponymous character in Carol would be a thankless one, the heavy hovering indistinct on the edges of the story. Instead, in adapting it from page to screen, the film gives more breadth to the character and Chandler's performance allows him to be at least somewhat sympathetic. Played by Chandler, the character isn't the "bad guy," per se, but rather a man frustrated by the fact that life hasn't fully delivered on the promise of the American dream, complete with a loving wife by his side, and who just can't understand why it is that Carol doesn't want to be with him and that things just aren't going to be the way he was always told they were supposed to be. Stars Cate Blanchett and Rooney Mara have received the most notice for their performances, but Chandler deserves some recognition, too, because what he brings to the film is invaluable. 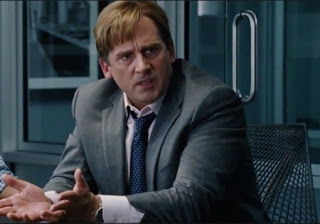 #9: Steve Carell, The Big Short
Steve Carell has one of The Big Short's showiest roles, but he also delivers what is (even if perhaps only by a hair) it's most compelling performance. As the straight shooter who likes to tell it like it is (especially when he gets to tell someone else that they're being a greedy idiot), who is disgusted by the way that the system has corrupted itself and is going to destroy itself in the process, but who must also reconcile himself to the fact that he's part of that system, Carell is fantastic. Righteous with anger and incredulous at what the people around him think they're going to be able to get away with, Carell turns the character into the closest thing the audience will find for a surrogate, demanding answers and accountability while expressing shock at how far things have gone sideways. Carell is a performer who just keeps growing as an actor and The Big Short is a career best. 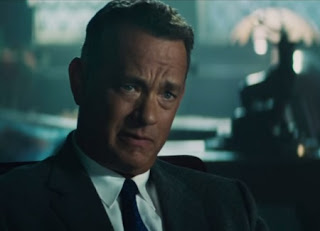 #8: Tom Hanks, Bridge of Spies
The character that Tom Hanks plays in Bridge of Spies isn't a particularly complicated man, but that's a big part of why the performance is so impressive. His character is basically just a good man, a man who believes in the principles of justice and democracy, and who believes in doing the right thing in the right way. I'm not sure any other actor working today could so easily embody the qualities of simple decency the way that Hanks can, which makes it pretty much impossible to imagine any other actor in this role. Imbuing the character with a keen sense of intelligence, a determination to get the job done, and just a touch of weary humor, Hanks takes his character to the brink and back and he does it in a way that seems natural and effortless. Hanks is the kind of actor who's always so good that it would be easy to take him for granted, but he really does do excellent work here. 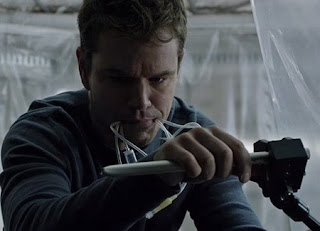 #7: Matt Damon, The Martian
If acting is reacting, then playing a scene all by yourself must be the hardest task for an actor. For most of The Martian, Matt Damon has to do just that, carrying scene after scene all by himself with no one to bounce his performance off of, holding down the center of the narrative largely in isolation. As the man left behind on Mars, Damon's character first despairs of his situation but then finds a way to rally, not just resolving to figure it out, but coming to relish the opportunity to take this seemingly unsolvable problem and work it through, channeling his fear and anxiety into something useful. The Martian was one of the most rousing crowd pleasers of the year and Damon is perfectly cast a guy smart enough to save himself, enthusiastic enough to make math and science compelling, and who maintains his sense of humor even in situations where he would be excused if all he could do was sit down and cry. Damon has played more complex characters, but I'm not sure that he's ever had such a tough assignment as a leading man. 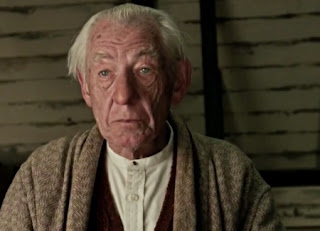 #6: Ian McKellan, Mr. Holmes
Seen here well into his retirement, McKellan's Sherlock Holmes is a man who is not just physically frail, but mentally frail as well. For a man who has been celebrated for his ability to see what no one else does in order to fit the pieces of the puzzle together, it is particularly distressing for him to find himself unable to recall the information he already possesses and to know that his failing abilities may have resulted in a tragedy. As Holmes, McKellan delivers a deeply vulnerable performance that doesn't just let the character's weaknesses show, but allows them to be the starting point for how the character engages with the world. He's a man lost within himself, struggling not just to solve a mystery but to regain his sense of identity and McKellan hits all the right notes in his depiction of him. 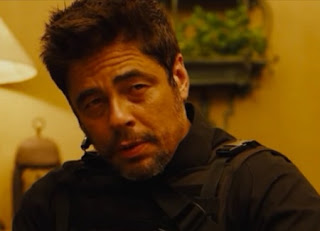 #5: Benicio del Toro, Sicario
There's a lot of evil in Sicario, but it expresses itself in its most complex form through Benicio del Toro's Alejandro. As the film begins to lift back the veil on the character, Alejandro is revealed to be a man who has so thoroughly compartmentalized his experiences that the man he once was and the man he is now may as well be two different people. Having experienced first-hand the horrors of cartel violence, he has transformed himself into a machine of vengeance and in the process has become exactly the kind of monster that robbed him of everything he ever cared about. This is a character who, in one moment, holds a gun to a woman's head and in the next tells her that she reminds him of the daughter that he lost, and del Toro is able to embody the duality of that moment and make you believe that he feels some tenderness for the woman as a result of the similarity and that he won't hesitate to pull the trigger if he feels he has to. It's such a fascinating performance that it's no wonder that a sequel is already in the works centering on del Toro's character. 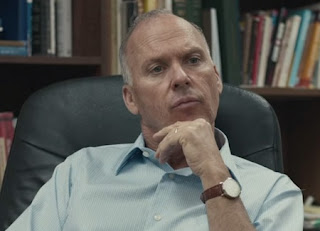 #4: Michael Keaton, Spotlight
It's hard to chose which performance in Spotlight is the best because it is so thoroughly an ensemble film and everyone is firing on all cylinders, but Michael Keaton ultimately has the slightest of edges playing the character who joins the crusade to expose the corruption of the Catholic Church only to discover that he himself played some small role in the cover up. His realization that it takes a village - that it isn't just about an institution protecting itself but about people in a community turning a blind eye to the evidence that's all around them - to make a conspiracy of silence this unbreakable. While the blame for the abuse rests with the perpetrators and the institution which didn't just cover it up, but created the circumstances for the abuse to continue and thrive, Spotlight also acknowledges that a community can't just expect accountability, but has to demand it and work to help achieve it. Keaton's character, and his performance, embodies that principle and, in many ways, functions as the compass guiding the narrative. 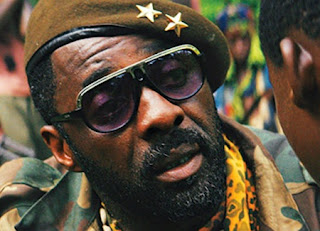 #3: Idris Elba, Beasts of No Nation
Evil is not necessarily repulsive at all times. It takes a certain level of magnetism to attract followers and so indoctrinate them that they will do anything you ask; you have to be liked and admired in some respect, even if you're also feared. As the Commandant in Beasts of No Nation, Idris Elba plays both sides of evil. He plays the side that brings people to him and keeps them by his side, and he plays the side that reveals itself to be corrupt and depraved, but what really makes the performance so profound is that he never sees himself as the villain. He plays the character as if he never wavers from seeing himself as the hero of his own story, even as the film begins to rip away the layers and reveals the character to be a weak man who only seems strong because he has surrounded himself with children, and whose hold on sanity is so tenuous that he'll end up in the middle of a jungle, ruling an imagined kingdom that is crumbling to dust all around him. The character is despicable, but Elba is amazing. 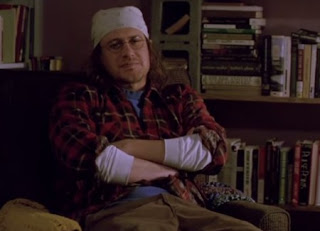 #2: Jason Segel, The End of the Tour
As David Foster Wallace in The End of the Tour, Jason Segel delivers a performance that is revelatory. It's more about physical presence than anything, as Segel uses body language to express where Wallace is at in any given moment, particularly those times when he has retreated into himself and uses silence as a weapon. At the point in time the story is focused on, Wallace is at the height of his success as a writer, having just put out Infinite Jest, but despite that he's not entirely secure in himself and gradually finds himself drawn into an ongoing contest for dominance with the interviewer played by Jesse Eisenberg, their dynamic constantly shifting as new situations result in the upper hand position moving back and forth between them. It's a performance of quiet depth that hadn't been suggested by Segel's prior work, and it isn't just a career best, but one of the very best of the entire year. 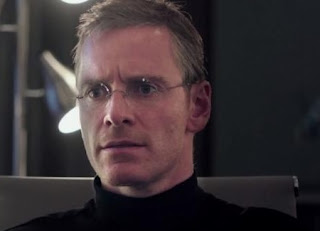 #1: Michael Fassbender, Steve Jobs
As played by Michael Fassbender, Steve Jobs isn't exactly a likeable guy, but he's never less than compelling. It's because Fassbender leans into the edges, letting the character be prickly and selfish and behave in the worst way to the people who deserve to be treated in the best way by him, that makes him so fascinating. Whether the man he plays bears any actual resemblance to the real Steve Jobs is up for debate, but I think it's safe to say that he captures the idea of Jobs, of a genius driven to bring his vision of the future to fruition, of a man who has an absolute need to be in control of all things because he is the only person he trusts to do it right. As played by Fassbender, Jobs is a man who steamrolls over just about everyone, even the people he claims to be protecting and looking out for, but doesn't necessarily do it out of malice so much as he's doing it because he isn't capable of seeing beyond himself to the feelings of others. It's an electrifying performance from one of the most consistently great actors working today.
Posted by Norma Desmond at 8:00 AM