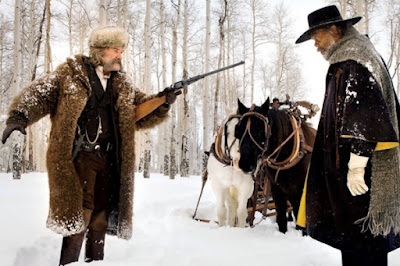 The Hateful Eight begins perfectly, concludes reflectively, and contains an incredibly mixed bag of elements in between. All things told, it's one of Quentin Tarantino's most thematically ambitious features, but it's also one of his least successful films and winds up feeling a draft or two shy of the Tarantino we know and (many of us) love. I'm not sure when, exactly, this western turned locked-room mystery started to lose me a little, but I definitely never felt anything like the level of exhilaration and engagement I've felt when watching Tarantino's best movies, including his two most recent efforts, Inglorious Basterds and Django Unchained. The thing is, if this exact movie came from a different director, I'd probably have walked away from it thinking that that filmmaker was someone to watch going forward; it's only because it's from Tarantino that I found it kind of disappointing. Not bad, just disappointing.

The Hateful Eight opens with a stagecoach making its way over the snowy Wyoming terrain, trying to outrun the storm coming up behind it and get to Red Rock, where its two passengers - bounty hunter John "the hangman" Ruth (Kurt Russell, doing a dedicated John Wayne impression), and Daisy Domergue (Jennifer Jason Leigh), the woman he's taking to hang - are expected. Well before reaching Red Rock, the coach is stopped twice by men who find themselves with the misfortune of being left on foot in the middle of nowhere. The first is Major Marquis Warren (Samuel L. Jackson), who is known to Ruth and is also a bounty hunter. The second is Chris Mannix (Walton Goggins), whose family's reputation as Confederate militiamen is known to Ruth and who claims to be the new sheriff of Red Rock, though he has no paperwork to prove it. Ruth reluctantly agrees to let Mannix hitch a ride on the stagecoach, making a deal with Warren to protect each other's interests (that being their respective bounties, which for Ruth is Daisy and for Warren is the three bodies he's got tied to the roof of the coach) against any attempt by Mannix to undermine them. With the storm about to hit hard and Red Rock still some ways away, the stagecoach passengers and driver, O.B. (James Parks), intend to stop at a way station called Minnie's Haberdashery and wait out the storm.

On their arrival Ruth and Warren, both of whom know Minnie and her husband, Sweet Dave, are surprised to find them absent, having left a man who calls himself Bob (Demien Bichir) in charge until their return. Inside the haberdashery are three guests who eventually reveals themselves as Oswaldo Mobray (Tim Roth), the hangman of Red Rock, Joe Gage (Michael Madsen), who is passing through on his way to spend Christmas with his mother, and Sandy Smithers (Bruce Dern), a Confederate General who has come to find out the circumstances of his son's death. With the storm now fully bearing down, the nine travelers settle in for what they expect to be two or three days of being trapped together, the tension having already started to bubble over as a result of the animosity between Warren and Mannix and Smithers, and as a result of Ruth having come to the conclusion that at least one of the men in the cabin is secretly in league with Daisy and planning to help her escape. As the mystery begins to unravel, much blood will be spilled, many epithets will be uttered, and some alliances will be revealed while others will be formed in response.

The Hateful Eight unfolds in six chapters separated into two parts, and in terms of content the first part is distinguished by "talk" and the second by "action." The first part is all about setting the table, bringing in the colorful cast of characters, letting them relate their histories (both real and manufactured), and letting them size each other up. Although The Hateful Eight is nowhere near as quotable as Tarantino's other films, I generally preferred the first part over the second, with Tarantino putting the plot on a slow simmer while letting the actors do their thing, exploring their characters through their interactions with each of the other characters in the confined space of the one room cabin. In the second half Tarantino amps things up, dispatching characters in graphic and gory fashion, sometimes using violence as a punchline to the film's dark humor. Things about the second part work - in particular the discovery by Warren and Mannix that, despite the fact that the former fought for the Union and had a bounty put on his head by the Confederate side as a result of how good he was at killing white people in great numbers, and the latter fought for the Confederate side and thinks that black people are less than human, they have to find a way to work together, which works because Jackson and Goggins are both so good as their respective characters - but overall it feels less cohesive than the first part and less compelling.

Tarantino is often characterized as a filmmaker who favors style over substance, who creates works that are visually arresting and full of crackling dialogue without necessarily being "about" anything. The Hateful Eight is definitely trying to be about something and, depending on your point of view, it might be seen as a hopeful (insofar as any Tarantino movie could be characterized as "hopeful") piece about people from disparate backgrounds, experiences, and points of view putting their differences aside in order to work together for a common goal (or, to be more specific, about racist white people letting go of their hatred rather than letting it make their decisions for them), or it might be seen as a pessimistic piece about the broken promise of America, where all men are supposed to have been created equal but instead find the system rigged in favor of certain kinds of people and against other kinds of people. With The Hateful Eight Tarantino is definitely trying to make a statement, but he goes about it sort of clumsily, especially in the film's closing moments where the words being spoken are so on the nose that it feels like being spoon fed a message. All that being said, even "lesser" Tarantino is still fine and better than a lot of other stuff out there, but The Hateful Eight is definitely closer to Death Proof on the Tarantino spectrum than it is to Pulp Fiction.
Posted by Norma Desmond at 8:00 AM