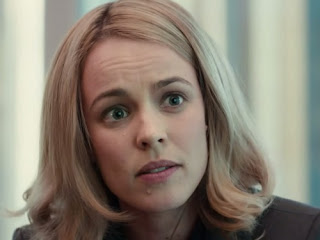 #10: Rachel McAdams, Spotlight
Rachel McAdams makes no big speeches in Spotlight. She has no emotional outbursts, no romantic complications, no moment of self-doubt. She's just a woman who is dedicated to her job and whose ability to draw people out makes her an indispensable member of her team. It's a quiet performance, with the character's role largely to create a space for revelations from others, but that's why what McAdams does is so crucial. The quiet competence with which she instills the character makes her a natural for people to open up to, whether it's the victims of abuse that she's interviewing, a perpetrator who shocks her by openly admitting to what he did, or a fellow reporter who turns to her to talk through his anger at the situation, she makes for a natural confidante. McAdam's best moments in the film occur when she's simply watching someone, her performance built on small, subtle gestures. It's a performance so relaxed and unaffected that you might not even notice it - which is exactly what makes it so great. 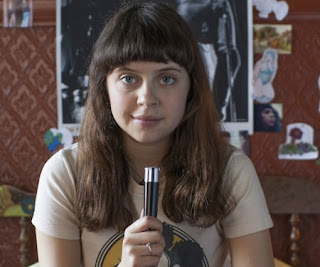 #9: Bel Powley, The Diary of a Teenage Girl
Coming of age stories don't come much grittier or emotionally raw than The Diary of a Teenage Girl and that's due in no small part to star Bel Powley's willingness to go to the depths and leave it all on screen. Playing a character who is ravenous in her desire - not for sex, necessarily, but for any kind of physical affection - and goes about trying to satiate it in all the wrong ways, the role requires Powley to be very vulnerable as a performer and she doesn't shy away from the most painful aspects of the character's journey, laying herself bare in more ways than one. It's a powerful, emotionally draining performance that sees her character victimized, making bad and self-destructive choices, and finally coming to see the people in her life more clearly and learning how to accept and love herself, flaws and all. The Diary of a Teenage Girl was one of the most underseen gems of 2015 and Powley's performance is the major reason to go and seek it out. 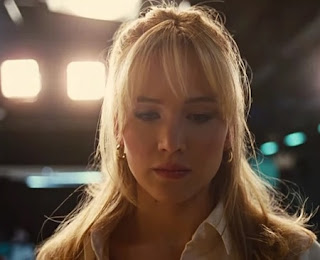 #8: Jennifer Lawrence, Joy
As a film, Joy sort of plays like "Strong Female Character, The Movie," but that doesn't in any way detract from Jennifer Lawrence's performance. Playing the title character, the inventor of the Miracle Mop among other things, Lawrence doesn't just carry the movie, anchoring the story while a colorful supporting cast whirs around her, she delivers a performance which captivates from beginning to end as she struggles with and then overcomes one setback after another, her faith in herself sometimes wavering but never for long. As played by Lawrence, Joy is a woman who may bend under the weight of the world, but is never going to break. She always manages to dig that extra inch in order to claw her way up and keep going, and in Lawrence's hands we believe absolutely in her ability to do it. Lawrence is such a natural actor and so at ease whenever she's on screen that, at just 25, she's already got several stellar performances under her belt and her performance in Joy joins that ever growing pantheon. 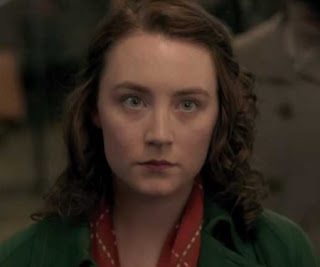 #7: Saoirse Ronan, Brooklyn
Though her career is really only just getting started, Saoirse Ronan has already demonstrated an ability to play a wide range of kinds of characters. In Brooklyn, she shows that she can play a perfectly ordinary woman and make it utterly compelling, carrying the audience along with her as she encounters perfectly relatable issues like finding her place in a new city (and, in her case, country), experiencing loneliness and homesickness, falling in love, and losing a loved one. And carry is exactly what Ronan does, bringing the story from Ireland to American (and back again) and delivering a performance which, in a very understated but effective way, shows how much her character has grown and matured and come into her own over the course of the narrative. There's nothing particularly showy about the role and Ronan doesn't try to make it something that it's not. She lets the quiet dignity of the character carry the day and in the process delivers a beautiful performance. 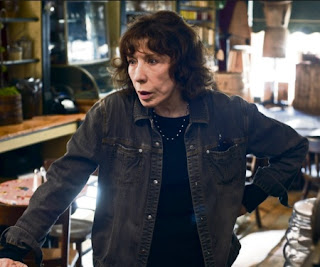 #6: Lily Tomlin, Grandma
Playing the title character in Grandma, Lily Tomlin doesn't go out of her way to make it easy for the viewer to like her. She's short tempered and kind of mean and she's smart enough that when she tosses a barb someone's way, it really stings. In fact, when we first meet her, she's in the process of breaking up with her girlfriend and nastily dismisses her as being nothing more than a "footnote" in the story of her life. However, prickly as she might be on the surface, underneath that is a person capable of great warmth and a ride-or-die loyalty, both of which she displays over the course of a few hours as she attempts to help her granddaughter scrape together a few hundred dollars. Tomlin is such a naturally funny performer that the comedy in the role comes easily, but what really sticks with you is the depth of feeling she gives the character, who is full of grief and regret. She's tough and acerbic, but thanks to Tomlin's complex and dynamic performance, she's also very compelling. 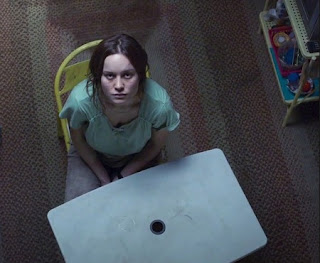 #5: Brie Larson, Room
In Room Brie Larson plays a young woman who lives through a long, sustained nightmare, but it's what happens after she escapes her confinement which really shows what Larson is capable of. Struggling with the trauma of her experience, eager to skip ahead to get to the part of her life where she's back to feeling "normal," but coming undone as her relief at getting out of room turns into bitterness - at the friends she used to have who got to go on and live their lives without anything really bad happening to them, at her parents for all the changes that have occurred in their lives in her absence, at her son for still needing her so much when she's so emotionally drained after years spent trying to shield him from the truth - she begins to fall apart after years of finding a way to be strong. The role is an extremely complex one made more so that the character is seen from the perspective of a young child who doesn't grasp the meaning of what they've just been through. In order to make us understand her character, Larson has to transcend the limits of that perspective and she does it with ease. 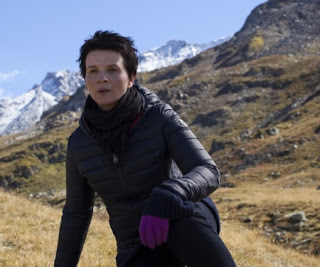 #4: Juliette Binoche, Clouds of Sils Maria
Juliette Binoche is such a fantastic actress that she could probably just stand still on screen and recite the alphabet and it would be one of the most captivating things I saw all year. In Clouds of Sils Maria she plays an actress struggling with the passage of time, having grown far removed from the celebrated role which made her a star, and being forced to reckon with the fact that she's starting to become irrelevant as a new generation of stars begins to take the spotlight. As she attempts to prepare for a role that she keeps insisting she doesn't really want and isn't really right for, her confident facade begins to crack. She may be well-respected but she's no longer "it," and what it means to be "it" now is something she can't quite comprehend. Although the film, and the role, has some heavy drama and Binoche plays it brilliantly, she also brings a lot of humor to the piece, bringing the character down to earth from the lofty heights of stardom. It's a great performance from beginning to end. 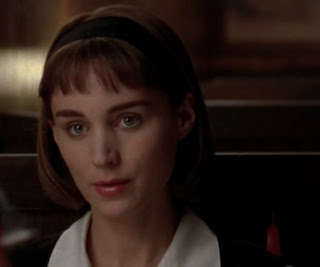 #3: Rooney Mara, Carol
There's a world of difference between the character Rooney Mara is playing at the beginning of Carol (the beginning of the story, that is, since the film begins near the end and then flashes back) and the character that she's playing by the end. The change happens gradually over the course of the narrative, born out of an experience that is at once painful and exhilarating, taking root deep inside the character and then transforming her from the inside out. The openness and sincerity with which Mara invests the character makes her pain all the more palpable, though she makes her less a tragic heroine than a survivor. It's an absolutely stunning depiction of a person not just experiencing first love, but experiencing it in a way that also requires her to learn how to negotiate the world around her and the limitations that society might impose upon her. It's an amazing performance that is more than deserving of all the praise it has already received and the awards it has already gained. 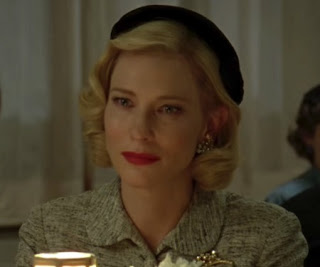 #2: Cate Blanchett, Carol
Where to begin? As the title character in Carol, Cate Blanchett is required to give a performance on top of a performance, as she isn't just playing Carol, but playing Carol playing "Carol." "Carol" is the persona, the societally dictated role that she has to play, a pose and a costume that she has to adopt whenever she goes out into the world. Carol is the real woman underneath, the one who has tried to, in her own words, live against her grain in order to be what she's expected to be, but who has hit her limit and just can't keep it up anymore. In some scenes Blanchett is playing the persona, in others she's the real woman, and in others still she's the real woman slipping out from underneath the persona. It's an often heartbreaking performance, one in which even the line reading of a single word can be utterly piercing (and this happens several times in Carol), and it is a glorious addition to Blanchett's already large treasure trove of wonderful performances. 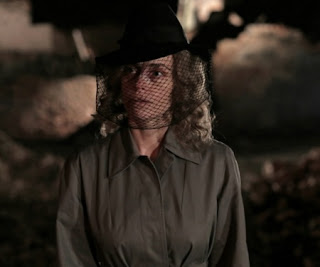 #1: Nina Hoss, Phoenix
There were a lot of great performances by women in 2015, but it didn't get any better than Nina Hoss in Phoenix. Playing a concentration camp survivor who has had to have reconstructive surgery to her face which has left her not quite looking like herself and pretends to be someone pretending to be herself in an effort to make her husband (who thinks she's dead) fall back in love with her, she delivers an exquisitely heartbreaking performance. For much of the film, Hoss plays her character as if she's just barely holding on, the thought of reuniting with her husband the only thing that still keeps her going, but it's towards the end, when the character discovers just how much strength she has left inside, that the performance goes from great to masterful. If the entire performance consisted of nothing more than the film's final scene, in which Hoss expresses everything that needs to be said without actually saying anything at all, it would still be a strong contender for best of the year.
Posted by Norma Desmond at 8:00 AM