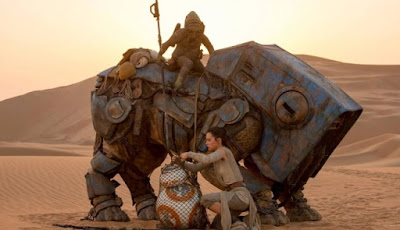 I'm a Star Wars fan, but not a Star Wars fanatic (which is probably evident in the fact that I waited a month to actually see The Force Awakens). I have an abiding affection for the original trilogy, which I was too young to see when they originally hit theaters but old enough to see when they were re-released in theaters in the 1990s, but I didn't care for the prequel films and, in fact, was so unimpressed by Attack of the Clones that I've never even bothered to see Revenge of the Sith, so when plans for The Force Awakens were first announced, I was more curious than anything. But The Force Awakens is most certainly a movie made for people who like the movie that started it all, to the point where it's replaying those original beats and barely bothering to pretend that it isn't. If it weren't so entertaining, it might be derivative, but fortunately it's pretty damn entertaining.

Set some 30 years after the events of Return of the Jedi, The Force Awakens finds the Empire not so much destroyed as re-branded as the First Order. The Rebellion is now the Resistance, backed by the Republic and under the leadership of the once Princess Leia, now General Organa (Carrie Fisher), who is in a race with the First Order to find Luke Skywalker (Mark Hamill). As the film opens, Resistance pilot Poe Dameron (Oscar Isaac) is on the planet of Jakku in order to obtain a missing piece of a map to where Luke has exiled himself, but he barely has it before the First Order arrives under the command of Kylo Ren (Adam Driver) and begins destroying everyone and everything in sight. Poe entrusts his droid, BB8 with the map and sends him away to keep him out of Kylo Ren's grasp, and then is taken prisoner himself and subjected to a brutal interrogation at Ren's hands. Fortunately for him, he's soon rescued by a Stormtrooper suffering from an identity crisis, FN-2187, rechristened "Finn" (John Boyega), who helps him escape; unfortunately for him, they crash land back on Jakku and Poe is seemingly killed. Evading capture, Finn makes his way to a settlement on Jakku, where he finds BB8 and Rey (Daisy Ridley), a scavenger who lives in the ruins of Empire/Rebellion battles past, and together the three steal a ship in order to put some distance between themselves and the First Order.

The ship they steal is the Millennium Falcon, which is in turn reclaimed by Han Solo (Harrison Ford) and Chewbacca (Peter Mayhew), now working a smuggling operation. With the First Order alerted to the fact that Solo is now in possession of BB8 and the map, the Falcon lands on Takodana to seek help and end up with a front row seat when General Hux (Domhnall Gleeson) tests the First Order's new weapon, the powerful Starkiller Base. In the chaos that ensues, Rey is kidnapped by Ren, who realizes that she has seen the map; the Resistance, including Poe, who survived the crash by being thrown from the wreckage, swoops in to drive the First Order's force from Takodana; and Leia and C-3P0 are reunited with Han and Chewbacca. With the fate of the galaxy hanging in the balance, the Resistance must find a way to destroy the Starkiller before it can be deployed again, while Finn is determined to find a way to rescue Rey, and Leia implores Han to do what he can to bring their son - Kylo Ren, the former Ben Solo - back from the dark side before he is lost to it completely.

In many ways The Force Awakens, which was co-written by director J. J. Abrams, Michael Arndt, and Lawrence Kasdan (who was also a co-writer on The Empire Strikes Back and Return of the Jedi), is a greatest hits package of moments from the original trilogy, with the characters, events, and situations of those films echoing through this one. If the film were executed with less finesse, that might feel like an all too naked ploy to tap into audience nostalgia for the first three films and gloss over the less positive legacy of the more recent trio, but while it is certainly a ploy, it's integrated into the story successfully enough to work. The Force Awakens emulates things from the first set of films, but it also tweaks those things enough to keep them interesting. While only time will tell if Rey, Finn, and Poe become as iconic as Luke, Leia, and Han, or whether Kylo Ren will become as synonymous with evil as Darth Vader (BB8 is, of course, already a star, its legacy assured), they're interesting enough to make one want to see how their story ends up and how the conflicts established here (Rey's desire to reunite with the family she's been separated from since childhood and her sudden discovery of her abilities vis a vis the Force; Finn's struggle to not just find a new destiny for himself, but to create an identity for himself after being raised to be a cold and compliant cog in the Stormtrooper machine; Ren's inner battle between the Light and the Dark; Poe's... okay, Poe isn't really developed as a character in this one, but maybe he will be in the next) shape the films to come.

While there are a few aspects of The Force Awakens which I felt didn't fully work - George Lucas got a lot of mileage out of cribbing from The Triumph of the Will and Nazi iconography in depicting the Empire, but The Force Awakens feels like it leans particularly heavily on this; and while I liked that Ridley's Rey had such a prominent, active role in the story, it feels like a narrative cheat that everything seemingly comes so easily to her (she can talk to BB8! She can fly the Falcon! She can use a lightsaber and tap into the Force!) - I was ultimately so entertained by the film that those things didn't really matter in terms of how much I enjoyed it. Since this film is merely the first chapter in a new trilogy, it's somewhat hard to determine how successful it is as a story - that will have to wait until the next two films are released and the whole arc has been revealed - but as a jumping off point, setting up new plot threads, new conflicts, and new characters, it's pretty solid and leaves me looking forward to the next chapter.
Posted by Norma Desmond at 8:00 AM

I am pretty much in agreement with this review. It borrows heavily from the original trilogy, but is so fun it's hard to fault it for that.

Hey, if you're going to copy other movies, you could do a lot worse than the original Star Wars trilogy.