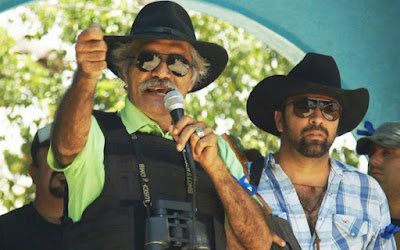 Cartel Land is one of the most terrifying movies I've ever seen. To be blunt, these people are fucking crazy and they all have guns. The only person who might be crazier is director Matthew Heineman, who tags along with vigilantes on both sides of the US/Mexico border as they battle against drug cartels, and is right there with them in some incredibly risky situations. But with great risk comes great reward and it's all up there on the screen in this documentary which, scary though it may be, is also utterly fascinating and completely riveting. Having now seen four of the five documentaries nominated for this year's Oscar, I think this is one of the best shortlists they've ever arrived at.

Cartel Land starts in Arizona, where Heineman follows Tim "Nailer" Foley, who describes himself as having started his paramilitary group in response to the fact that the actual authorities don't have the resources to stop the influx of drugs coming over from Mexico. In an effort to protect his property and his neighbors, Foley has armed himself and patrols the area around the border while decked out in camo, on the lookout for drug runners that he can stop before they cross over the border. Here's the thing, though. As depicted by the film, Foley isn't a victim who has simply had all that he can take and decided to stand up for his property rights in the face of inaction from the government. He came to this place from somewhere else specifically to stop "illegals" (not drugs) crossing over from Mexico, prompted by the fact that he couldn't find a job because "all the jobs" had been taken by people from Mexico working under the table (but don't call him a racist; he doesn't like that). Also, he only switched to being a drug crusader when he learned that the same people responsible for bringing drugs over are also bringing people over, not that he's ever actually successful (as far as the film shows) in stopping drugs from crossing the border. He does, however, get to "detain" several people being brought over the border and hand them over to people who have actual authority to hold people.

Most of the action in the film takes place on the other side of the border in the Mexican state of Michoacan, where violence from the cartels, particularly the Knights Templar, has inspired locals to form a self-defense group under the leadership of Dr. Jose Mireles. Unlike the Arizona paramilitary, the members of what becomes known as the Autodefensas have legitimate fear of the cartels as an immediate threat to their safety and can't count on the government because members of the police force and military have ties to the cartels. Under Mireles' direction, the Autodefensas work to rid Michoacan of the Knights Templar, methodically going from town to town and flushing them out, with Mireles emphasizing that there's to be no looting or theft because then they would be no better than the cartel. For a time, it seems like Autodefensas is a success, with the people of one town actually chasing the army away when they arrive to try to disarm the Autodefensas, but, as history has shown time and again, power corrupts. When Mireles is injured in a plane crash (which he suspects may have been an assassination attempt) and forced to go into hiding while he recovers, the mission of the Autodefensas begins to careen out of control as its members begin stealing goods and money from the cartel members they "arrest," breaking into homes, and picking people up off the street at gunpoint. In stark contrast to the scene in which the Autodefensas are treated like conquering heroes in one town, the people of another tell them that their presence is not welcome because of all the questionable things they're doing.

In capturing the footage that is assembled in Cartel Land, Heineman is pretty fearless. At one point while following the Autodefensas, the group comes under fire and has to take cover and Heineman is right there, being shot at along with them, capturing the events as they regroup and decide to pursue the car they believe the shots came from, pull over and absolutely terrorize the family that's inside the car on the belief that it was the father who shot at them, put a gun to the man's head and demand that he come with them, and then take him to a facility where they interrogate and torture people they believe to be members of the Knights Templar. It is a brutal and upsetting sequence of events which shows just how difficult it is to get the genie back into the bottle once you let it out, with the group growing in power and influence but also having their original mission of self-protection degenerate into just straight up acting like a gang, an outcome precipitated by the fact that in order to maintain control of their territory they need to grow their ranks, and to do so accept former cartel members into their organization. The sequence also helps expose what's going on in Arizona for the puffed up play acting that it is, with a handful of angry white people arming themselves and going out into the mountains in the hope of coming face-to-face with cartel members so that they can live out some sort of Wild West fantasy that is most likely to end up getting one of them shot in the head if they ever actually encounter a cartel.

Cartel Land is a powerful piece of work, both for what it shows and for how Heineman shapes the footage. At first, the film seems to be contrasting the situation in Arizona with the situation in Michoacan, with the former depicted as some armed kooks actively courting an opportunity for violence, and the latter depicted as people who are in real danger from cartel violence (one of the women interviewed for the film describes an absolutely horrific encounter with a cartel which resulted in her husband's death) and have no choice but to take a stand. As things progress, however, the difference between the Autodefensas and the cartels becomes increasingly blurred and then disappears completely and the film seems to be acting more as a warning about the need to contain self-appointed law enforcement groups before they get out of control. Moreover, as the film opens it depicts Mireles as, not a hero exactly, but a sane man bringing sense to a place of chaos, and as the story unfolds it exposes him for being as fallible and willing to abuse his power as anyone else. What happens in Cartel Land is the stuff of nightmares, but it makes for an engrossing, thought provoking, and really well-assembled documentary.
Posted by Norma Desmond at 8:00 AM