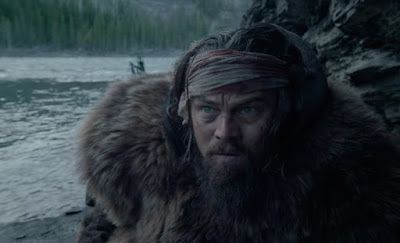 The Revenant is brilliant and frustrating. While watching it I was alternately rapt and bored, witnessing some moments that verged on genius and others which were sunk by their artificial profundity. That's the thing with filmmaker Alejandro Inarritu's work, though; he tends to make films that come just this close to greatness without quite leaving you with anything to hold on to afterwards. You watch his work and marvel at the technical prowess on display, but there's an emptiness at the core that prevents it from resonating. The first twenty to thirty minutes of The Revenant are amazing, and it is intermittently great from that point on, but by the time it was over, I was more than ready for it to be over and that was before it arrived at its final shot, which actually made me roll my eyes it was so trite. However, when you consider that I would gladly sit through all of the film's lesser moments just to see its great ones again, I suppose you can chalk that up to a victory on the film's part.

Set in 1823 and based on true events, The Revenant tells the amazing tale of Hugh Glass (Leonardo DiCaprio), a fur trapper and explorer who is assisting a hunting expedition under the command of Captain Henry (Domhnall Gleeson). When the hunting party is attacked by members of the Akira tribe they suffer heavy losses and those who survive are driven out of their camp and back to their boat, narrowly escaping capture for the moment. While some members of the party, including Fitzgerald (Tom Hardy), think it best to stay on the boat despite still being pursued by the Akira party, Glass advocates for going back to shore and making the long trek back to the nearest settlement by foot, and Captain Henry opts to follow Glass' advice. A short way into that journey, however, Glass is mauled by a grizzly bear and left near death and, though the group at first attempts to haul Glass back with a stretcher, the path becomes too treacherous and the weather becomes too harsh to make that feasible. Unable to bring himself to "finish" Glass off in the presence of his son, Hawk (Forrest Goodluck), Captain Henry instead offers a cash reward for two men to stay behind with Hawk to see Glass through to the end and ensure that he has a proper burial. Bridger (Will Poulter) quickly volunteers and, after he and Hawk offer to forgo their share of the reward, Fitzgerald volunteers to stay behind with them.

While Captain Henry and his few remaining men make their way back to the settlement, Fitzgerald bides his time waiting for Glass to die so that he can go and collect his reward. However, when Glass hangs on longer than expected, Fitzgerald gets antsy about staying behind and decides to take matters into his own hands, killing Hawk when he tries to prevent him from killing Glass, and then convincing Bridger that they need to leave Glass behind because the Akira have caught up with them. After hastily dragging a still-living Glass into a shallow grave, Fitzgerald takes off with Bridger and they make their way back to the settlement. Glass, meanwhile, manages to drag himself out of the grave and begins crawling after Fitzgerald, determined to avenge the death of his son. As he makes his way to the settlement, Glass struggles to overcome the injuries he already has, the new injuries he sustains, the weather, near-starvation, and encounters with the Akira and with a party of French traders with a nasty streak, fueled by little more than his thirst for vengeance.

Adapted for the screen by Inarritu and Mark L. Smith from the novel of the same name by Michael Punke, which was itself inspired by the legend of Hugh Glass, The Revenant throws a lot at the audience over the course of its 156 minutes and though it takes its time in telling its story, I'm not convinced that it's actually saying much of anything. It acknowledges the greed of Western expansion and settlement and its negative effect on the environment and the people who were already living in the area; it depicts violence as a cycle which, once started, is never ending, doing so most directly during the attack that opens the film and in which the camera follows one man until he's killed then begins following the man who killed him until he himself is killed, and so on, the baton constantly being passed on; and its narrative is propped up on the notion that a parent is capable of going to extreme and violent lengths for the sake of their child - the grizzly is trying to protect her cubs, Glass has killed in the past to protect his son and is now trying to avenge his son's death, the Akira Chief is searching for his kidnapped daughter - but to what end? If the film is trying to argue that violence is bad and committing it will fail to net anything positive, then what to make of the fact that while the grizzly ends up dead, and thus separated from her cubs, and Glass is given the choice to take his revenge or not, but will remain separated from his son by death, the Akira Chief gets his daughter back but continues to commit acts of violence anyway?

There are a number of things about The Revenant that I liked, but almost each is offset by something that I didn't, leaving me feeling at best lukewarm about the film as a whole. For example, I liked that the film did not depict the Akira as a faceless, enigmatic horde out to kill white people just for the sake of killing white people, and instead gives them a motivation for attacking the hunting party and devotes a few scenes to the Chief's point of view, allowing him to become an actual secondary character. At the same time, however, I didn't like the damsel in distress aspect of the daughter being kidnapped within the context of the film as a whole, in which women factor only to be raped, rescued, or to act as spectral helper maidans to assist the hero on his journey (personally, I would prefer that a film not have any women in it at all than to feature them on such limited and cliched terms). For another example, while The Revenant features sequences that are breathtaking for how extraordinary they are, such as that opening battle scene and the much-discussed bear scene, there are also stretches that feel interminable, including the climactic scene, which goes on for longer than it needs to. Yet, all that said, the strongest individual elements of The Revenant are enough to compensate for the weaker elements. Cinematographer Emmanuel Lubezki once again turns in stellar work (and may be on his way to his third Oscar in as many years), the visual effects (also Oscar nominated) are incredibly rendered, particularly in the bear attack scene, and DiCaprio and Hardy both turn in excellent performances. On the basis of those things, I would have to recommend The Revenant, but it's a marginal recommendation at best.
Posted by Norma Desmond at 8:00 AM