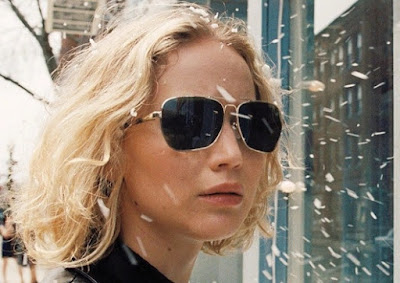 Although it markets itself as being a true story, David O. Russell's Joy is really more of a fable (and I'm not just saying that because the film apparently just straight up makes a bunch of stuff up, even more so it seems than most "based on a true story" films), and while it doesn't start with the words "Once upon a time," it really might as well. Grounded by an excellent performance by Jennifer Lawrence, who once again transcends Russell's habit of casting of her in roles that she's much too young for, Joy works more often than not, though it is a bit disjointed when looked at as a whole. A lot of people seem to be calling Joy a step back for Russell after the string of hits of The Fighter, Silver Linings Playbook, and American Hustle, but I have to say, as someone who liked Silver Linings but found The Fighter and American Hustle bizarrely overrated, I don't think Joy is actually any kind of step back in terms of quality. It's a fine movie, one that contains snatches of brilliance without ultimately being anything extraordinary.

The story told in Joy is narrated by the title character's grandmother (Diane Ladd), who encourages her creative and driven granddaughter to go out and be something because she recognizes that she has the capacity to do it. However, whatever drive Joy might have had in childhood, she's largely lost it by the time she's an adult and struggling to support a household which includes her two young kids (though you'd be forgiven if you had forgotten about the second kid by the end, as the film seems to forget him, too), her mother (Virginia Madsen), who doesn't just live in a room in Joy's house but seems incapable of existing anywhere outside its walls and spends all her time watching TV, her ex-husband, Tony (Edgar Ramirez), a singer who lives in Joy's basement despite the fact of their divorce, and her father (Robert De Niro), whose divorce from her mother was and remains acrimonious and who despises Tony, with whom he is now forced to share a room after being kicked out by his second wife. Hovering around the periphery of the household are Joy's half-sister, Peggy (Elisabeth Rohm), who resents Joy and tries to undercut her at every turn, Joy's best friend, Jackie (Dascha Polanco), and Trudy (Isabella Rossellini), a wealthy widow who begins dating Joy's father.

Jumping back and forth over time, the screenplay relates how Joy and Tony got together and then quickly came apart but remained friends, how Joy invents what would become the Miracle Mop and, with an investment from Trudy, mass produces it and then begins hustling to try to get it in stores, and finally gets herself a spot on the newly launched QVC. On the verge of having to file for bankruptcy, Joy watches as her product crashes and burns on QVC and then decides to take matters into her own hands, demanding that QVC executive Neil Walker (Bradley Cooper) give her a chance to go on the air to sell the product herself, reasoning that if she managed to sell him on it, she can sell the public on it, too. Neil isn't really convinced, and he's even less so when Joy decides to forgo the styling he's arranged for her so that she can go on as "herself," but after an early on-air hiccup, Joy manages to rally and her product begins selling like gangbusters. More trouble looms, however, in the form of difficulties with her manufacturing company and ongoing issues with her family, both of which threaten to destroy her new empire before it's even truly been built.

In telling the story of Joy Mangano - except not really, as the story is apparently equal parts fact and fiction - Russell opts to unfold Joy in a narrative that is always going forward and back, which has the effect of giving the film an artificial sense energy which it might lack if it were being told in a straightforward fashion, and which almost masks the fact that the film consistently fails to build on anything. There are a lot of obstacles that Joy has to overcome from the beginning of the film to the end, but each conflict gets resolved pretty quickly and seem compartmentalized rather than necessarily connected. The only real constant in the film is that most of the people around her (save her grandmother, Tony, and Jackie) are basically all horrible in their own specific ways, but Joy is too loyal and goodhearted to cut any of them off (I was happy to learn that in real life there is no Peggy, because otherwise I might have felt bad for how much I wanted to see her get punched in the face). Apart from the film's issues on a storytelling level, it's sort of odd that a movie that directly posits itself as a love letter to strong women, and in which most of the major characters are women, only actually features one and then has the rest (and, okay, some of the men) be the thing holding her back or cutting her down at virtually every turn.

What holds Joy together is Lawrence's performance, which is really great despite the film's problems. She excels in every situation that Russell tosses her into here, whether it's the light romantic comedy of Joy and Tony's courtship (which includes a duet of "Something Stupid"), the dramatic descent into self-doubt as everything falls apart and Joy becomes crippled by disappointment, the frequent shifting between patience and exasperation that she experiences with virtually every member of her family, occasionally with flashes of righteous anger thrown in, and a fantastic moment in which someone greatly overplays his hand and attempts to intimidate her only to have her turn the tables and reveal that, in fact, she's the one holding all the cards. Lawrence holds the film together and is believable as the formidable and driven woman the film needs her to be, the one who manages to keep getting back up whenever she stumbles, the one who won't be held down for long and will always find a way to take care of business. It's a shame that Joy isn't a stronger effort overall, but it's worth seeing based on Lawrence's performance.
Posted by Norma Desmond at 8:00 AM