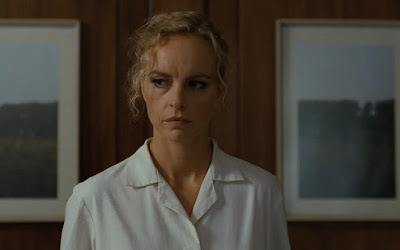 Christian Petzold’s Barbara is a vision of restraint. Telling a story about life under the brutal terms of dictatorship, it’s a film which avoids (mostly) depictions physical violence and instead favors depictions of the quieter, arguably more insidious, psychological violence of day to day life, and the way that the denial of privacy and independence can break a person down bit by bit until it becomes unbearable. It’s a story about the desire to escape, but also about what it means to stay and what it means to want to stay. It’s a film that uncoils itself slowly, building gracefully and effectively, and which runs so deep that its ending becomes even more meaningful precisely because it is so subdued, using its final moments not to show its protagonist striking a definitive blow against the system, but merely contemplating what she has gained – and all that she’s lost in the process.

As written by Petzold and Harun Farocki, Barbara is a film that knows how to create a wealth of meaning in a simple sentence or two. In its first two minutes alone, it tells us everything we need to know about the protagonist (Nina Hoss), introducing her by watching her being observed from afar by two men – Andre (Ronald Zehrfeld), the chief physician at a rural hospital and a Stasi informant, and Schutz (Rainer Bock), a Stasi officer – as she arrives at the hospital, checks her watch, and sits down to have a cigarette. “She won’t be even one second too early,” Schutz states. “She’s like that.” She’ll do what’s required but absolutely nothing more, subtly rebelling against the totalitarian government seeking to crush her under its thumb, biding her time until she makes her move. She was once a doctor at a prestigious East Berlin hospital but is now in virtual exile, having just completed a period of incarceration after making a request to leave East Germany. She is under constant surveillance by the Stasi, both officially by Schutz, who makes periodic visits to her home to subject her to thorough searches of her property and invasive strip searches to impress upon her that everything, even her own body, belongs to the state; and by Andre, who has been assigned to gain her confidence and report on her.

The relationship between Barbara and Andre quickly becomes complicated. She singles him out as an informant almost immediately, when he gives himself away by offering her a ride home after work and then demonstrating that he knows where she lives without her having to tell him. The professional relationship which develops between them is marked by a hushed hostility on her side, and an unruffled persistence on his, though it isn’t entirely clear whether he persists because he’s attracted to her or because it’s part of his job. Mid-way through the film he attempts to gain her confidence by telling the story of how he ended up a village doctor despite his obvious ambition for more, and when she immediately begins looking for holes in his story, he responds by asking if it was too detailed to be believable. The film’s carefully crafted undertone of suspicion helps keep Andre an ambiguous figure. He is, at some level, genuinely drawn to Barbara despite her discordant personality, and yet he remains determined to toe the Stasi line, comfortable with the moral compromises he’s made and willing to carry on as the “good soldier” in exchange for whatever benefits he gains as a result. He's made his peace with his circumstances and encourages Barbara to do the same, to carve out a contented life in the constrained conditions of the system under which they live.

Like Andre, Barbara herself is a character divided, torn between her professional duties to her patients in East Germany and her desire to escape to the other side of the iron curtain, which she intends to accomplish with the aid of her West German boyfriend, Jorg (Mark Waschke). Despite the tight leash the Stasi are keeping on her, Barbara is making preparations for her plan of escape. Meanwhile, despite Jorg's professions of love and the lengths he is going to help her, their few brief scenes together demonstrate that he doesn’t know Barbara very well. He seems to believe that she merely wants an easier life, that she could be happy giving up her work and letting him financially support her, and even offers to move to East Germany himself so that she doesn’t have to undergo the danger of defecting, not seeming to understand that her desire isn’t simply to be with him, but to escape from a regime that she finds oppressive and abhorrent. Moreover, her dedication to her patients makes it clear that she could never just walk away from her work and into a life of leisure. Indeed, as the day of her escape fast approaches, crises with two of her patients bring her to a crossroads where she must decide whether she’s willing to sacrifice her freedom or her duty of care to the people who need her.

A frequent collaborator with Petzold (Barbara is their fourth film together), Hoss delivers a performance that perfectly mixes hardness and humanity. Her experience going up against the system has left her unwilling to even attempt pretense regarding her feelings at living under a State which attempts to control everything, and she is at times direct to the point of seeming hostile. She’s fed up and suspicious of the motives of nearly everyone, though she remains open to others, particularly those in need, informed no doubt by her own experiences which have resulted in her feeling violated, humiliated, and victimized by the system. She can be prickly, but she can be deeply compassionate, too, and she emerges as such a fully realized character that even in her many silences her point-of-view comes across loud and clear. Hoss’ performance is as measured as the film itself, but both are deeply affecting, effortlessly giving a sense of a life lived constantly on edge and with the walls constantly closing in. Though the solution to Barbara’s third act moral dilemma isn’t necessarily surprising, Barbara more than earns the right to that kind of finale where victory and defeat are inextricably tied together. Barbara is a wonderful achievement, both for its director and for the actress in the title role.
Posted by Norma Desmond at 8:00 AM