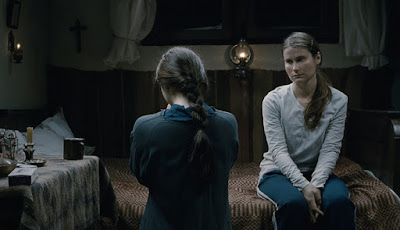 Movies that take place in cloistered religious communities very rarely end well, though Cristian Mungiu's Beyond the Hills is the rare film of its type that has some degree of compassion for everyone involved and doesn't necessarily cast anyone as a "villain," so much as it underscores how misguided and dangerous strict adherence to a narrow worldview can be. It's not an easy film, particularly if you know that the premise was inspired by something that actually happened, but it's so deeply engrossing that you can't look away and its 155 minutes seem to be over in the blink of an eye. I'm a huge fan of Mungiu's 4 months, 3 weeks and 2 days and as a follow up Beyond the Hills did not disappoint.

Beyond the Hills opens with the reunion of Voichita (Cosmina Stratan) and Alina (Cristina Flutur), who grew up together in an orphanage but whose lives have since taken them in different directions. Alina has been living in Germany, but has been alone and isolated and longs for Voichita to join her there. Voichita, meanwhile, has become a nun in the orthodox church and has committed herself to God and has no intention of leaving the religious compound despite the plans that Alina has made for them. For Alina, who has thought of nothing but Voichita, nothing has changed between them, but for Voichita things are fundamentally different, as she has confessed and repented of her sins, which includes a sexual relationship with Alina, and is determined to live within the bounds of the church from now on and in accordance with the direction of the Priest (Valeriu Andriuta) and the Mother Superior (Dana Tapalaga), whom everyone calls "Papa" and "Mama," respectively.

Soon after her arrival at the compound, and after she realizes that Voichita has not just renounced their relationship but confessed it to the Priest, Alina suffers a fit and is taken to the hospital. However, the hospital, being overcrowded and understaffed, shows Alina the door almost as soon as they let her in, and Voichita talks the Priest into allowing Alina to recover at the compound, as she has nowhere else to go, which he agrees to on the condition that Voichita will be responsible for her friend and that Alina will observe the rules of the compound by confessing her sins and doing penance for them. Unable to bear the thought of being separated from Voichita, Alina seems to agree to these terms but she continues trying to convince Voichita to leave with her, and her behavior continues to be erratic. After several incidents which confirm in the eyes of the Priest and the nuns at the compound that Alina is suffering from demonic possession, they decide that they need to do the only thing that makes sense to them in order to save her: perform an exorcism.

Adapted from the novels Deadly Confession and Judges' Book by Tatiana Niculescu Bran, which were themselves inspired by the death of Maricica Irina Cornici in 2005, Beyond the Hills unfolds in a spare and unforced fashion that allows for a lot of nuance with respect to the situation at hand. What happens to Alina is horrible - she's left tied and chained to a plank in a room without heat or electricity in the middle of winter, deprived of food and water because giving her those necessities would make the "demon" stronger along with her - and the Priest and the nuns are at fault for it, but the film doesn't present it as a black and white matter of religious zealots destroying a life in defense of their beliefs. The first time that Alina falls ill, they take her to a hospital where they're advised that Alina would be better off with them and where they see that the hospital staff has restrained her so that she doesn't harm herself or them. The Priest and the nuns are not equipped by training or experience to deal with the mental illness that Alina clearly has, and the people that are have sent her back to them. When she begins exhibiting the signs of illness again, they do what they saw done in the hospital (they restrain her) and don't appreciate that they're treating her with a degree of violence that could only exacerbate her condition, if it didn't outright kill her. Additionally, because their whole life style is based around the idea of privation, they can see nothing wrong with using the denial of necessities in their attempt to "save" Alina.

But, at the end of the day, the things that they did resulted in a young woman's death and the film doesn't make any attempt to absolve them of that, nor does it suggest that they shouldn't be punished for it. It merely wants to understand how something like this could happen, both in terms of the direct circumstances, and the larger social circumstances, that contribute to it. It understands, through Voichita, how it is that the religion's rigorous embrace of routine and rules could offer a defined structure that would be appealing to someone whose life has lacked a support system or sense of direction and who has never felt that she belonged anywhere before. It also understands, also through Voichita, that the group is so deeply immersed in their practices, and so isolated from everything else around them out of the belief that those who are not orthodox have lost their way, that they're dangerous to someone like Alina, who is so mentally, and eventually physically, vulnerable. The story that Beyond the Hills tells is tragic, but it never lapses into melodrama, as Mungiu opts for an arms length view of the proceedings which lends it a feeling which is more academic than emotional. It digs deep nevertheless, becoming a film that is haunting precisely for how stripped down and matter of fact it is.
Posted by Norma Desmond at 8:00 AM