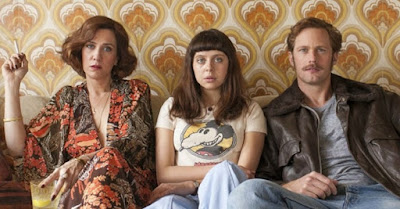 From its opening moments, when its protagonist happily announces via voiceover that she's just lost her virginity to her mother's boyfriend, The Diary of a Teenage Girl asserts itself as a different kind of coming of age film and the proceeds to unfold with an uncommon, often provocative, frankness. For some it may actually be too frank, as it is unapologetic in its depiction of its protagonist having a lot of (ill advised) sexual experiences, but it is also an intelligent, funny, and deeply felt film about a girl struggling through a seminal, confusing, and contradictory time in her life. Like most great coming of age movies, it is also a triumph of casting and features a wonderful, defining performance at its center, in this case that of Bel Powley.

Based on Phoebe Gloeckner's semi-autobiographical graphic novel The Diary of a Teenage Girl: An Account in Words and Pictures, the film is set in San Francisco in 1976 and stars Powley as Minnie Goetze, a 15 year old who lives with her single mother, Charlotte (Kristin Wiig), and her younger sister, Gretel (Abigail Wait). Her mother's boyfriend, Monroe (Alexander Skarsgard), is a constant presence in the house and in Minnie's fantasies and one night, emboldened by what might be either accidental physical contact by him or a subtle pass at her, she makes explicitly clear to him that she wants them to have sex. Afterwards, they begin meeting in secret on a regular basis and she begins documenting their experiences in an audio diary that she keeps hidden in the safest possible place: a shoebox under her bed, with the fail-safe strategy of starting the first tape by stating that if the listener doesn't have her permission to hear it, he or she should immediately stop listening. She also shares the details of her experiences with her best friend, Kimmie (Madeleine Waters), who thinks the situation is gross because Monroe is her mother's boyfriend and he's old. However, Minnie, who considers herself unattractive, craves the kind of attention and physical contact that Monroe is now giving her, even if the relationship is destructive and harmful on multiple levels.

Her clandestine relationship with Monroe runs hot and cold, with him regularly pushing her away whenever he fears that they're coming close to being caught or whenever he feels that he can manipulate her by cutting her off, and then pulling her close again when he thinks she's about to slip away into another relationship. Her desire to be wanted (at one point she candidly confides that she just wants "to be touched") leads her into experiences that are sometimes painful and confusing. She has a brief fling with a classmate, which ends when he becomes freaked out by how sexually assertive she is and criticizes her need to be active, rather than passive, while having sex. She has a sustained flirtation with a girl she sort of knows from the places where she and Kimmie hang out, which progresses to more during a particularly difficult period in Minnie's life but proves destructive, and she and Kimmie embark on a series of adventures together which mostly lead to regret. Along the way, Minnie discovers the work of cartoonist Aline Kominsky and begins to find her own voice as an artist and writer.

One of the intriguing things about Diary is the way that it gives full breadth to Minnie as a character even as it depicts her in ways that might, in a lesser film, seem entirely contradictory. She's guided by a lack of self-esteem, which leads her to measure her self-worth in accordance with the physical contact she experiences and to confuse sex with love, but at the same time, the film doesn't pathologize her or deny her a sense of sexual agency. Her desire for affection, particularly physical affection, sometimes expresses itself in destructive ways, but that doesn't make her desire any less genuine. She likes and wants sex, even though the circumstances of many of her sexual experiences are questionable in context. Many stories of this type, where a young girl is sexually pursued by a much older man, would portray Minnie wholly as a victim, but while Minnie is certainly manipulated and exploited by Monroe, the film also refuses to view the situation as black and white (it also refuses to view the idea of "exploitation" as black and white, presenting several different types of situations where the potential for Minnie to be exploited exists, including one in which Minnie and Kimmie get drunk and decide, as a lark, to prostitute themselves to two guys in a bar). Monroe is certainly the bad guy in the situation, yet the more openly predatory he becomes, the more pathetic and less powerful he's revealed to be, at one point crying to Minnie that she's the only one who understands him (if you're a grown man who can only be understood by a 15 year old girl, you're probably not much of a man). The effect is achieved in equal parts through the way that director Marielle Heller depicts Monroe as a character of diminishing returns, emerging first as a dreamy figure in Minnie's imagination but revealed to be just a little seedier, a little more lacking in substance, each and every time he appears on screen, and by the wonderful, complex performance by Skarsgard.

The key performance, though, belongs to Powley, who makes Minnie a thoroughly compelling character, one who ends up having a number of bad experiences through the course of the film but doesn't end up seeming like a tragic figure because, in the end, she takes those experiences and actually grows from them (one of the film's final lines, in which Minnie describes via voiceover the difference between her and her mother, simply and elegantly demonstrates how far she's come from where she started; incidentally, Wigg, as the mother and playing things entirely straight, is also excellent here). Her performance, and the film itself, can sometimes be difficult to watch because it cuts so close to the bone, laying bare Minnie's anxieties and the ways that she feels alienated from herself and the world around her, leaving the character with nothing to hide behind. I kind of hate it when people describe an actress' performance as "brave" simply because of the amount of nudity involved, but I can't really think of a better word to ascribe to Powley here, not just because of the nudity but because of the way that that nudity is used and depicted by the film. Hers is a fearless, funny, and poignant performance in a film that can absolutely be described in the same terms.
Posted by Norma Desmond at 8:00 AM