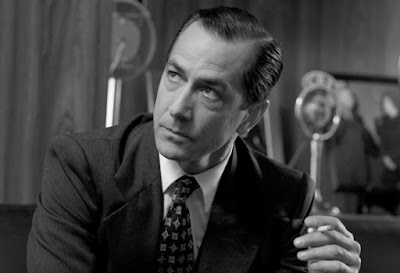 Good Night, and Good Luck. was one of the best reviewed movies of 2005 and by far the best reviewed of all of George Clooney's directorial efforts, and it was one of the most nominated films at the 78th Academy Awards, yet it doesn't seem to get mentioned very often anymore, even in discussion of Clooney's work. While people still talk about Crash (albeit often negatively and in regard to its Best Picture win) and Brokeback Mountain, two of the other Best Picture nominees, Good Night, and Good Luck. seems to have fallen off the radar. You can chalk this up, I suppose, to the film being very much a work "of the moment," one which was built to have its greatest impact during the exact political/social moment of its release. Still, it seems odd that a film considered so essential at the time of its release should have fallen so far to the wayside.

The Story
1953. Senator Joseph McCarthy holds court in Washington, creating an atmosphere of Cold War fear and paranoia in his efforts to ferret out Communist elements from American government and society. In the face of this, broadcast journalist Edward R. Murrow (David Strathairn) uses his forum on CBS to challenge the tactics and motives of McCarthy, backed by his co-producer, Fred Friendly (George Clooney), and the rest of his staff, which includes reporter Joseph Wershba (Robert Downey, Jr.) and his wife, Shirley (Patricia Clarkson). After Murrow throws down the gauntlet, McCarthy responds with an attack on his own, which has the potential to derail Murrow's career and threaten the confidence that CBS chief William Paley (Frank Langella) has in him.


The View from 2005
The Good: "Burnishing the legend of Edward R. Murrow... Good Night, and Good Luck is a passionate, thoughtful essay on power, truth-telling and responsibility." - A.O. Scott, The New York Times

The Bad: "[Clooney] also leaves out nuance, context, empathy, anything that suggests the larger truth that nothing is as simple as it seems. The film, therefore, is like a child's view of these events, untroubled by complexity, hungry for myth and simplicity." - Stephen Hunter, Washington Post


The View fro 2015
First and foremost, when it comes to a film like Good Night, and Good Luck. one must give some degree of consideration to its historical context - that is, the historical period in which it was made, rather than the one it depicts. It is, by design, timely rather than timeless, intrinsically tied to the politics of the day in a way that, for example, Clooney's political thriller The Ides of March, the kind of "loss of innocence" tale that could be made and told at any time or any place, is not. On a surface level it is a film about Edward R. Murrow taking a stand against the practices deployed in the hunt for Communists in America. Not very far below the surface, it is a criticism of the state of media and journalism in the years immediately after 9/11, when political discourse rose to an especially hysterical pitch as the "War on Terror" was launched, when facts were twisted and fears exploited to justify it, and dissent shut down with "you're either with us or against us" rhetoric. It's meant as a call to arms to journalistic institutions to question the party line and in doing so serve the public, rather than blindly endorse and serve the government. If it seems less urgent, less like a landmark, or overly self-congratulatory now, it's because even though only 10 years have passed, a lifetime might as well have passed culturally and politically.

Seen in 2015, Good Night, and Good Luck. feels far from revolutionary, and like something of an oddity (it resembles nothing in Clooney's CV more than the TV film Fail-Safe, which was a live broadcast play), though it remains a very good film. As a director, Clooney has never seemed more assured or more artistically expressive, unfolding the story in crisp black and white that allows him to luxuriate in atmospheric, period details, particularly the smoke curling up from cigarettes in nearly every shot. Set almost solely on the stage where Murrow's program is broadcast, and frequently emphasizing just how small that space is (when Murrow films his broadcast, the camera is practically in his lap and Friendly is at his feet, close enough to tap him on the leg to signal that the broadcast has gone live), the film has a claustrophobic feeling that perfectly suits the paranoid, "walls closing in," sense of the day, which is in turn further underscored by the subplot involving Joseph and Shirley, who have kept their marriage a secret due to CBS policy about relationships between co-workers, and fear the loss of their jobs if their status is discovered.

As a storyteller, Clooney, whose father was a broadcast journalist and who himself studied journalism at University, seems very at home with this material and the film holds up well. In particular, the decision to incorporate McCarthy only through archival footage, rather than having him depicted by an actor, is inspired, though that docu-reality sensibility is somewhat at odds with the dreamier aspects of the piece such as the decision to break up the action at regular intervals with performances by a jazz combo recording in a studio nearby. Elements like that tip the film into the realm of a curiosity, but ultimately the strength of Murrow's words, in addition to the wonderful performance by Strathairn, help bring it back into the realm of the serious and important. Good Night, and Good Luck. can certainly be accused of feeling its own importance a little too much - there's a sequence during which Murrow finishes a broadcast and everyone claps and cheers which feels a little bit less like the characters celebrating a victory within the context of the story, and more like those involved in the film celebrating themselves - but the film nevertheless remains engrossing and engaging in a way that not all politically minded films can manage.
Posted by Norma Desmond at 8:00 AM