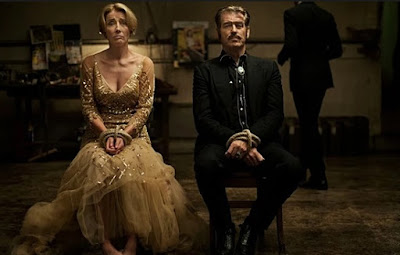 On the one hand, it's sort of unfortunate that a film like The Love Punch can attract such an overqualified cast; it's the sort of fluffy, unchallenging, and inconsequential movie that disappears from your memory almost as soon as you finishing watching it. On the other hand, the people who finance movies are so disinterested in films about people over "a certain age" (unless they're well over a certain age and you can put a bunch of them in a hotel together) that if you want to see actors like Emma Thompson or Pierce Brosnan in anything, you kind of have to see them in things like this. Personally, I'd rather see something with Emma Thompson in it than nothing with Emma Thompson in it, which is how I came to see The Love Punch, a proudly middle of the road movie that ends up being more entertaining than it has any right to be, given its low ambitions, but manages to coast a long way on the charms of its cast.

Brosnan and Thompson star as Richard and Kate, respectively, a somewhat amicably divorced couple. Richard is on the verge of retirement, his only source of worry being what he'll do with his time once he's no longer working, particularly since he's just broken up with his much younger girlfriend, until he learns that his company has been taken over and the pension fund that he, Kate, and countless other people who worked at the company, have invested in is now kaput. After explaining the situation to Kate, they decide to go to Paris, where Vincent Kruger (Laurent Lafitte), the businessman who bought and dissolved the company, has his main office and where they hope to confront him and convince him to return the pension funds. Kruger, however, is unsympathetic and has them tossed out before heading down to the Riviera, where he's set to marry his fiance, Manon (Louise Bourgoin). When they learn that Kruger has just purchased a multi-million dollar diamond necklace for Manon, Richard and Kate come up with a plot to steal it and sell it on the black market in order to refund the pensions.

When they learn that Kruger is planning to use his wedding reception as a means of wheeling and dealing with some rich Texans, Richard and Kate develop a plan to pose as the business associates in order to gain access to the reception, however, as the Texans are comprised of two couples, they realize that they'll need help. To that end, they call upon their friends Jerry (Timothy Spall) and Penelope (Celia Imrie), who are eager to help, particularly Jerry, who turns out to have a mysterious past full of adventure which has equipped him with a skill set and a set of contacts that will prove quite helpful in pulling off the plot. The team in place, now all they need to do is kidnap the Texans, bypass security by scaling a cliff, get to the necklace and swap it out with a fake, and then get past security again, this time with the real necklace in tow. What could possibly go wrong?

The Love Punch is, to put it charitably, kind of dumb. To its credit, though, it seems to be aware of that and it isn't playing at being a particularly sophisticated piece of work. It's the sort of film best described as a "romp," a light as air affair that hits all the expected plot points at all the expected moments, something that doesn't surprise you but at least rises to meet your lowered expectations. It's the cinematic equivalent of a beach read. Considered in this context, The Love Punch is a very minor success as a film, a piece of work that has many small pleasures. While the fact that Richard and Kate will end up back together in the end, brought back to each other by their death defying (though even in its moments of highest intensity, The Love Punch never really feels like its stakes are quite that high) adventures, is a matter of course, the film nevertheless manages to do a nice flipping of the script in its depiction of husband and wife. Though it's part of the backstory that Richard kind of, sort of, left Kate for a younger woman, it's Kate who spends the film being pursued by a younger man and then is allowed to have her cake and eat it too, and without being made to feel guilty about it. It's weird that something like that should feel at all refreshing.

Thompson and Brosnan could probably play roles like this in their sleep (to say nothing of Spall and Imrie as the supporting duo), but neither of them can be said to phone it in. Their performances are charming and warm and in their scenes together they manage to provide some sense of the long history between their characters. They're well supported by Spall and Imrie, who help keep the tone light and breezy as if the whole plot is nothing more than a weekend lark and not, at times, a matter of life and death. All of these actors should be in better movies, but I'm also sure that each of them have been in movies that are far worse. The Love Punch is a very slight piece of work but it's fun and funny, the kind of movie that makes for a decent watch on a rainy Sunday afternoon.
Posted by Norma Desmond at 8:00 AM

I had a similar feeling about this movie too. I wasn't overwhelmed but just the chance too see Brosnan and Thompson as a couple was fun. It's pleasant time-wasting.

Exactly - they don't all have to be Best Picture contenders.