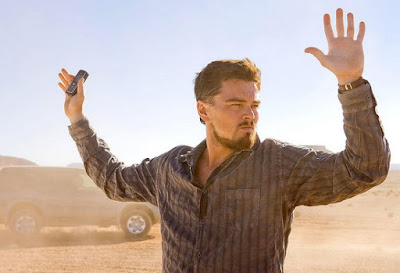 Even though my history with Netflix's recommendations is... let's say spotty (this is the algorithm that has recommended such terrible movies as Runner Runner, The Canyons, and This Means War, but also great movies like Miller's Crossing, The Panic in Needle Park, and Rise of the Planet of the Apes), I still sometimes take its word for it when it makes recommendations. This is because the list always contains at least a couple of movies that I've already seen and liked, so even though there are also movies that I know on sight I would hate if I watched them, I'm willing to give the films I don't already have any particular opinion about a chance. Body of Lies has shown up in my recommendations a couple of times, so I thought it was time to give it a try. Though I didn't hate it, my feeling about it amounts basically to a shrug, which is arguably worse.

More than halfway through Body of Lies I briefly perked up, discovering that there is the slightest germ of a plot here which, in a more inventive film, would serve as the beginning of a modern take on the Hitchcock "wrong man" plot were it not buried deep inside this turgid film, which goes out of its way to feel dense, as if that in and of itself makes it either good or important. That plot involves a Jordanian architect that the CIA singles out to be the straw man in its plan to flush out the terrorist leader they've been searching for by making it look like the architect is the leader of an even more sophisticated and successful organization. A premise like that could blossom into a pretty compelling thriller, but instead the thread gets introduced and then quickly snuffed as the architect is promptly kidnapped by the real terrorists and then killed so that the film's ostensible hero, Roger Ferris (Leonardo DiCaprio), can have further conflict with his boss, Hoffman (Russell Crowe), because Ferris is aghast that the architect ends up dead, even though I personally cannot imagine any other possible outcome for him after the CIA ruins his life by dangling him out as terrorist bait (not to mention as the face of a new terrorist movement) - which, oh yeah, was Ferris' idea in the first place.

Ferris is an operative based in Iraq as the film opens, following the trail of Al-Saleem (Alon Abutbul), a bin Laden-like terrorist leader who has managed to evade capture while planning various attacks around the world. While in Iraq, Ferris manages to salvage some intel from destruction before being reassigned to Jordan to work in conjunction with Hani Salaam (Mark Strong), the head of Jordanian intelligence, and keep an eye on what the CIA believes to be a safe house in Jordan that is being used by Al-Saleem's organization. However, things quickly become complicated for Ferris as, while he's trying to gain the confidence of Jordanian Intelligence, an impatient Hoffman is running "side" operations which threaten to undermine all the work that Ferris is already doing. In the midst of all this, Ferris also begins a tentative romance with Aisha (Golshifteh Farahani), a nurse who treats him after he's attacked by wild dogs while chasing down a target. At first the stumbling blocks in their relationship are simple cultural differences that demonstrate not only how far apart they are in terms of how to conduct a relationship, but in how to begin one in the first place. Later, an even bigger stumbling block presents itself in the form of the danger that Aisha is in as a result of her association with Ferris, as his enemies begin to outnumber his friends and look to find a way to break him. As the story enters its final stage, he finds himself in an impossible situation - though just how much of it is real and how much is as contrived as the rival terrorist plot he concocted remains to be seen.

It's interesting to watch Body of Lies now in light of the casting debacle of Ridley Scott's last film, Exodus: Gods and Kings. In response to criticism of that film's whitewashed casting, Scott argued that he wouldn't have been able to get a production of that scale financed without known actors in the leading roles (or, in his exact words, "I can’t mount a film of this budget, where I have to rely on tax rebates in Spain, and say that my lead actor is Mohammad so-and-so from such-and-such. I’m just not going to get it financed.”). There's a degree to which this is true, in that the bigger your stars, the more likely you are to get a big budget (though that notion really only explains the casting of Christian Bale, as I don't know that Joel Edgerton really qualifies as a "name" actor) and Hollywood's preference for telling stories about white people means that the majority of movie stars are white. The criticism was specific to Exodus and not to Scott's body of work generally, yet watching Body of Lies demonstrates that the habit of whitewashing isn't new to his work. Here you have Strong, a white actor, cast in the supporting but key role of the head of Jordanian intelligence, his appearance tinted ever so slightly so that he might appear vaguely Middle Eastern without the makeup out and out resorting to "brown face." Given that the film already has DiCaprio and Crowe in the primary and secondary roles, and given that Strong, though a recognizable character actor, isn't a "name" who could be used to secure a budget, there's really no reason why this is a role that couldn't have been played by an actor of color (or a "Mohammad so-and-so") except for the preference of the filmmaker. When people talk about Hollywood's "race problem," this is the sort of thing they mean; it's not just that actors of color aren't given the opportunities to take on leading roles, it's that sometimes they're even being excluded from playing the ethnically specific roles called for in scripts.

Anyway, questionable casting practices aside, Body of Lies is a mixed bag of good and bad. DiCaprio and Crowe are both great actors, so the film at least has solid anchoring in that respect, and though they don't spend a lot of time on screen together (they spend a lot of time on screen communicating with each other over the phone), the film is nevertheless able to draw their relationship in clear way that helps do some of the heavy lifting in terms of pushing the story forward. Ferris is your prototypical "best of the best" movie hero and Hoffman has enough confidence in him to give him the tough assignments, but at the same time he's an incorrigible mircomanager who just can't let Ferris run the show on his own, a habit which makes Ferris bristle as he finds himself essentially having to do two jobs at once: the job he was assigned to do, and the job of counteracting whatever shadow operation Hoffman has unleashed in order to do the job himself. I also like the detail of Hoffman playing puppet master over the phone even during scenes of his domestic life, issuing directives and dropping his kids off at school at the same time and somehow paying attention to both. On the bad side of things, you have a screenplay built on a lot of contrivance, particularly where the character of Aisha is concerned. She isn't so much a character, Ferris' relationship with her not so much a relationship, as a means of forcing Ferris into a situation where he has to sacrifice himself and end up face-to-face with Al-Saleem. She exists for no reason except to be kidnapped, essentially, and since it's obvious immediately that that's her purpose in the story, everything that comes after that just feels manufactured to get us to that point. If the opening stretches of the story seem at all tethered to reality, the ending undoes that entirely because it's all just a little too "Hollywood."
Posted by Norma Desmond at 8:00 AM