#5: Neighbors
In Nicholas Stoller's Neighbors, the age gap between Seth Rogan and Rose Byrne's young marrieds and Zack Efron's fat boys isn't huge, but the cultural chasm between them is. Figured here as a battle between the generation that grew up with Michael Keaton's Batman versus the one that came of age with Christian Bale's Batman, Neighbors gets its kicks from the group that isn't so far removed from their youth as to be considered "old," but are far enough out of step with youth culture that they're no longer exactly "young," either.

#4: 21 Jump Street
Like Neighbors, the situation in 21 Jump Street is one where the age gap is relatively small, but the difference in cultures is broad enough that the cops played by Channing Tatum and Jonah Hill are initially at sea when they go back to school posing as teenagers. The film gets in most of its generational gags early on, particularly during the sequence where Hill and Tatum first return to school, which riffs on the high school genre trope of analyzing each clique in the school by having Tatum and Hill come up empty when trying to identify groups that are a complete mystery to them from their own experience of high school.

#3: While We're Young
This year's While We're Young isn't Noah Baumbach's first foray into comedy turning on the clash between generations (2010's Greenberg was similarly themed), but it's got some good bite to it. Centering on a long married couple (Ben Stiller and Naomi Watts) who form an unlikely friendship with a pair of young hipsters (Adam Driver and Amanda Seyfried) and are enchanted by them at first, only to lift back the veil and discover how artificial and manipulative they are, While We're Young isn't Baumbach's best, but it's a solidly entertaining, somewhat dark comedy.

#2: Bend It Like Beckham
While not strictly a generation gap story, the conflict between the two teenage girls (Parminda Nagra and Keira Knightley) and their respective parents is a significant part of the story. For Nagra's character, her conflict with her parents arises from the strict gender norms they expect her to conform to, which includes not participating in sports because she's a girl. For Knightley's character, the conflict arises from her mother's belief that playing sports has somehow acted as a gateway to homosexuality after misinterpreting a fight between the two girls. 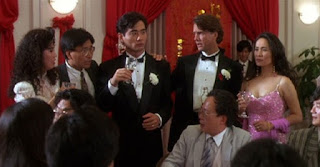 #1: The Wedding Banquet
Ang Lee's second feature film is one of his best reviewed films and was nominated as Best Foreign Language Film at the 66th Academy Awards. The story of an interracial, same-sex couple living in Manhattan whose life is turned upside down when the parents of the Taiwanese half of the couple begin trying to find him a wife, The Wedding Banquet isn't all laughs, but it's early sections have a zaniness to them that lands the film firmly in the realm of comedy.
Posted by Norma Desmond at 8:00 AM