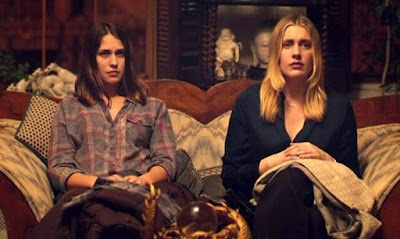 For a filmmaker who built a name for himself through razor sharp dissections of the anxieties, pretensions, and preoccupations of his own generation, Noah Baumbach has proved in his last couple of films that he has a keen eye for the next one, too. In fairness, in the case of Frances Ha and his latest, Mistress America, some of the credit for that must go to star Greta Gerwig, who also serves as co-writer of both, and whose presence on screen helps to soften some of Baumbach's naturally barbed edges so that the films seem more like rueful observations rather than the cinematic equivalent of an annoyed man muttering about the kids on his lawn. Mistress America isn't quite on the same level as Frances Ha, but it's a really good, really funny film with two fantastic performances at its center.

Mistress America is about Tracy (Lola Kirke) but it's really about Brooke (Gerwig), or rather it's about Brooke as seen through Tracy's eyes and refashioned for Tracy's own purposes. Though the two have never met as the film opens, their parents (Tracy's mother and Brooke's father) are about to get married, and since both are living in New York, Tracy's mom suggests that she call Brooke and see if she wants to hang out. Feeling lonely and alienated as she begins her first semester at Barnard, Tracy would actually love to call Brooke and hang out with her, but doesn't know how to do that, just as she doesn't really know how to make new friends and be social at school. When she does make a friend in Tony (Matthew Shear), who shares her goal of being accepted into the school's literary group and being published in the school's journal, she thinks it might progress to more, however, he quickly retreats and begins dating Nicolette (Jasmine Cephas Jones), a girl in one of their classes who gets insanely jealous every time Tony interacts with Tracy in any way. Left to her own devices again, and feeling lonely in the big city, Tracy finally works up the nerve (sort of) to call Brooke and quickly finds herself caught up in the whirlwind of Brooke's existence.

Brooke is the sort of person who commands a room without trying or even seeming to be aware that she's doing it, a burst of light and energy, a dilettante who does a little bit of everything but never finishes anything. She's a casual interior designer, a spin class instructor, a tutor to middle school students who wants to be an SAT prep tutor but has to retake her SATs first, an aspiring restaurateur whose plan for her restaurant is that it would also teach cooking classes and that hair could get cut there, and a one time almost-entrepreneur who still holds a grudge against the ex-friend that she says stole her million dollar idea. When Tracy confides to her that she wants to be a published writer of short stories, Brooke responds that she'd like to do that, too ("But not short stories," she clarifies). Tracy quickly becomes enchanted with her stepsister to be, both as someone that she enjoys spending time with and as someone who inspires her writing. Using Brooke as the basis for a story which turns out to be rather vicious, Tracy finds herself confronted with questions about her intentions (does she actually even like Brooke, or is she just using her for material?), as well as her right to use Brooke and her life for her story; questions which she doesn't yet have the ability to answer.

Mistress America is an energetic blend of grades of comedy, a film which could easily go in a bunch of different directions, providing a few segments which could each form the basis of its own, full story. It starts out as a story about an 18 year old out on her own for the first time, struggling not so much to "find" herself as to "create" herself, trying to get noticed and alternating between the loneliness of not quite belonging anywhere yet and the exhilaration of being out on her own doing things (there's a quick series of scenes which show her, literally, running around, taking charge of things, making plans, flitting from here to there followed shortly thereafter by a shot of her looking at her phone, its cracked face saying all that needs to be said). When Brooke shows up, things shift ever so slightly as she takes over at the center of the narrative, her ideas whirring around in every scene, her banter with Tracy so fast that it isn't so much back and forth, because statement and response don't necessarily accord with each other, but rather a series of friendly non-sequiturs. Tracy follows her around like a puppy, her adoration masking the fact that she's mining Brooke's life for material. Later on things shift again, as Tracy, Brooke, Tony, and Nicolette take a road trip out of state to visit Brooke's ex-boyfriend and the ex-friend who married him, the series of scenes which take place at their home feeling less like a film and more like a stage play full of rapid-fire exchanges and characters coming in and out of the room (including the members of a book club, a pregnant woman waiting for her husband to come pick her up, and an angry neighbor). In this sequence the film becomes a farce before being brought back down to earth again, and transforming into a tale of Tracy's struggle with the realization that, in using Brooke for her story, she's become the villain of the story in the eyes of everyone else. Baumbach juggles a lot of elements as he zips the story along to its conclusion (so much happens that when you realize it only takes place in the short window between the beginning of the school year and Thanksgiving, you're as amazed as Tracy is), but he keeps everything moving in such harmony that it never feels like too much.

Helping to keep things afloat are Gerwig and Kirke, each excellent in her own particular way. Gerwig is an inherently likable presence and brightens things the moment she shows up on screen here (Brooke is introduced walking down a flight of stairs, grandly welcoming Tracy into her life with open arms, only to realize that she's made the pronouncement a few stairs too early to be able to elegantly transition to sweeping Tracy into a hug). Gerwig is so likable that even when Brooke is being revealed to be less sunny than her initial disposition suggests, such as a scene where a classmate from high school confronts her about how mean Brooke used to be to her and Brooke essentially tells her, "Well, I'm over it so you should be, too," you still kind of can't help but like her. Everything that Tracy writes about Brooke is pretty much true - that she never finishes anything she starts, that she doesn't really know what she's doing, that all her running around is a mask for her fear that she's already missed out and now it's too late (hilariously, when she makes her pitch for an investment in her restaurant, what she describes is less a plan and dream for a business than it is a plan and dream for the life she wants to lead) - but there's such great vulnerability to Brooke that you can instantly understand why everyone turns on Tracy. Kirke, probably best known for her small role in Gone Girl, more than holds her own, her quieter and somewhat more restrained performance offering a nice balance to that of Gerwig and making it fully believable that Tracy could be so enamored and so calculating all at once. At a time when it seems rare that a film would have one really great role for an actress to make the most of, Mistress America is a breath of fresh air, offering two great roles with two great performances.
Posted by Norma Desmond at 8:00 AM