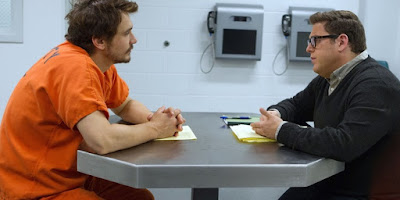 True Story opens with the evocative image of a teddy bear being dropped into a suitcase, landing next to the body of a little girl folded up inside. The callousness of the act, of the fact that not only is the girl in the suitcase but that the bear is thrown in, rather than placed, with her, the force of its fall displacing her hair so that strands of it go flying up and over the edge of the suitcase, is stunning. It's a powerful image that the remainder of True Story, a true story based on the memoir of the same name by Michael Finkel, can't live up to. Of course, that might not have been the case if the film had managed to make the actual victims of a truly horrific and, yet sadly commonplace, crime the emotional center of the story, rather than the disgraced writer whose identity was very briefly borrowed by the killer.

The film opens with scenes of the two "Michael Finkels." One is in Mali, conducting interviews for the story which will later result in him being dismissed from his position at the New York Times. The other is in Mexico and picks up a German tourist before the police show up to arrest him. The first, and actual, Michael Finkel (Jonah Hill) returns home and writes a story which nets him his 10th cover story for New York Times Magazine, a short-lived victory as very quickly questions begin to arise about the content of his reporting. Under scrutiny, he's forced to admit that what he's written isn't factually correct, at least not the way that he's told it, and he loses his job as well as his reputation. He retreats to Montana, where his wife, Jill (Felicity Jones), works at a university, and begins trying to put his career back together, calling up his contacts to pitch story ideas to them, only to find that no one wants to give him a chance with his public disgrace still so fresh. He's at loose ends until he's contacted by a reporter for The Oregonian, seeking to get his take on the case of Christian Longo (James Franco), who has just been arrested in Mexico for the murders of his wife and three children and had been using Finkel's identity during his brief time on the run. This is news to Finkel, who is baffled by this and ends up reaching out to Longo to ask why he chose him, of all people, to impersonate. Longo's answer is simple, that he's merely a fan, and during their initial conversation they strike a deal that Longo will tell Finkel his side of the story, and in return Finkel will teach Longo how to be a writer.

The two men proceed to have a series of exchanges, some in person, some via written correspondence. Longo unfolds the story of his life in a long handwritten missive he titles "Wrong Turns" and, perhaps because he finds so many similarities in their writing styles and in the way that they both doodle in the margins (even the doodles themselves are remarkably similar), Finkel begins to open himself to the possibility that Longo is not guilty of the crimes he's been accused of. However, after Finkel sends his book outline, which makes a big deal of Longo's intention to plead not guilty (or, as the film puts it, "plead innocent" - which is not a thing) and sells the idea of the book as a redemption tale of a man wrongly accused, off to its prospective publisher, Longo shocks everyone by appearing in court and pleading guilty to two of the murders and not guilty to the other two. Finkel is incensed and confused and Longo tells him that there are things he can't understand and that he's trying to protect certain other individuals. Despite this, Finkel remains on Longo's side, hoping that the "truth" will prove his instincts correct. However, as the trial unfolds, he begins to realize just how thoroughly he's not only been duped, but how much he's been used to help a killer develop rhetorical tricks that could result in a mistrial.

The primary failing of True Story is that it is situated too firmly in Finkel's point of view. To a degree, this is inescapable as the film is based on Finkel's book, but I have to think that there is a way to take the premise of this story and tell it in a such a way that all of the sympathy isn't directed towards Finkel. Some time ago I saw an episode of 48 Hours that dealt with this case and I came away from it thinking that Finkel, if not a complete idiot, was a little too naive given his journalistic credentials (though, in fairness, the real Longo may be more charismatic than the one depicted by Franco, who sleepwalks through the movie). I mean, it doesn't take a genius to know that a guy accused of murdering his entire family is maybe not the best person to seek relationship advice from, which Finkel admits to having done in his conversations with Longo (and may still do, seeing as they've apparently kept in touch). Finkel just isn't a sympathetic character, no matter how much the film strains to make him seem like one, and every time he discusses or reflects on the end of his career with The New York Times in hangdog tones, treating the subject as if it's something that happened to him rather than something he did on purpose but failed to get away with, it's just annoying. Not only is Finkel not "the" victim of this story, he's not even "a" victim in this story, yet this is all about him and no room can be found for any other perspective. The actual crime at the heart of the story barely even factors, and the film offers absolutely no insight into why Longo did the things that he did (I'd have to watch again to be sure, but I don't think the film even addresses his motive for killing his family).

Much of the film plays out in back and forths between Hill and Franco. Hill, in full on serious actor mode, is fine, though I think he would have been much better served if the film had edged its perspective and allowed the character to seem more weasely and driven by self-interest (if more of the film depicted him as it does in the scene during which he's caught in his lies at The Times and tries to admit to wrongdoing but escape the consequences at the same time, it would be vastly improved). Franco, on the other hand, is barely even present here and it's hard to believe that, if this is what Longo is like in real life, anyone could find him compelling, let alone believable, for even a moment. Franco goes beyond "dead in the eyes," to playing him as just dead everywhere. In the minor role of Jill - which the film does try to expand, but does so in a way that is entirely unbelievable, having her go to Longo and confront him about the lies that Finkel somehow can't bring himself to recognize - Jones does all that could be expected of her, though she is less a character here than an appendage to Finkel. I'm sure, in different circumstances, these three actors could get together and make an interesting movie, but True Story isn't it. At one point, Finkel defends his decision to write a book about Longo by stating that everyone's story deserves to be told, but what True Story proves is that that's just not the case.
Posted by Norma Desmond at 8:00 AM