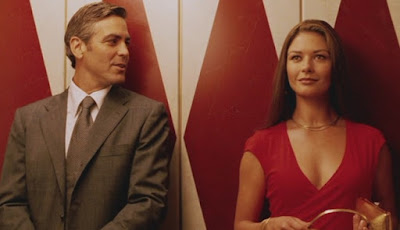 In the grand pantheon of Coen brothers movies, Intolerable Cruelty, their one foray into romantic comedy, often gets dismissed as being among the least of their works. To be sure, it lacks the staying power and importance of their very best work, but I've always had a certain degree of affection for it. It's a silly movie, but it also has an old school battle of the sexes vibe and I can easily imagine it, with a few tweaks for period sensibility, as a comedy from Hollywood's golden age, maybe with Cary Grant in the George Clooney role and Lauren Bacall in the Catherine Zeta-Jones role. Intolerable Cruelty is arguably the fluffiest movie the Coens have made to date, but it's a lot of fun in its lightness and inconsequentiality.

"Divorce" doesn't often factor into love stories, but it's the linchpin of Intolerable Cruelty, in which Clooney stars as prominent Los Angeles divorce attorney Miles Massey. Miles is hired by Rex Rexroth (Edward Hermann) to represent him in his divorce from his wife, Marilyn (Zeta-Jones), who appears to have the upper hand thanks to a video she has acquired from private investigator Gus Petch (Cedric the Entertainer) which catches Rex in flagrante with his mistress. At trial, however, Miles is able to flip the script and turn the story of the Rexroth marriage from one of a philandering husband and a wounded wife, into one of a gold digger who singled out a man she thought was an easy target and then sat back and waited for him to make a mistake. Marilyn ends up with nothing from the divorce, but being down doesn't mean that she's out and she quickly rallies and comes up with a new plan. That plan involves oil tycoon Howard Doyle (Billy Bob Thornton), whom Marilyn sweeps up in a whirlwind romance and then brings to Rex's office so that they can acquire one of the famous "Massey pre-nups," a document so airtight that no loopholes can be found in it. Knowing that Marilyn's goal is to acquire wealth and not necessarily remain in the company of a husband, Miles discourages Marilyn from signing it, but she insists that she knows what she's doing.

Marilyn and Howard wed, and her plan to get around the pre-nup is quickly revealed to Miles, who suggests to her at the wedding reception that, now that that whole marriage thing is "winding down," she have dinner with him. She, however, intends to be very careful in how she proceeds going forward and doesn't want the appearance of impropriety to ruin her carefully plotted out scheme. While Marilyn is off playing things out with Howard, Miles is enjoying the fruits of his success in the form of praise from his firm's senior partner and an invitation to speak at a national convention of divorce lawyers that will take place in Las Vegas. Yet, in spite of all this, Miles realizes that there is an emptiness inside of him now that Marilyn has slipped through his grasp. When she shows up in Las Vegas, fresh from her divorce from Howard and flush with cash, Miles knows that his time has come as, from his perspective, things are now perfect: not only is she single, she's also so rich that she has more money than he does. They have a quickie Vegas wedding and only then does Miles discover the awful truth, that he has become merely another stepping stone in Marilyn's grand plan.

Although the film's vision of the legal system bears virtually no resemblance to the way that things actually are in reality, Intolerable Cruelty has some fun with the idea of romantic relationships as a never ending battle field in which you either end up rich and lonely, or broke... and lonely. As envisioned by the film, divorce results in a happy ending for no one, not the television producer who gets cleaned out by his adulterous wife and ends up sleeping in an alley with only his awards to keep him warm, and not the multi-divorcee whose second marriage brought her a legendary divorce settlement but has left her terrified to enter into any kind of romantic relationship for fear that she'll lose it all in court. Only Miles and Marilyn end up happy (this is a romantic comedy, so I don't consider that a spoiler, and given the film's pessimistic outlook on marriage, their happiness may only be temporary anyway), as well as Miles' colleague Wriggly (Paul Adelstein), who is oddly sentimental for a divorce lawyer. While this inherently dark view of the world should make the film itself rather dark, Intolerable Cruelty is light as air from beginning to end, zipping through the breakdowns of multiple marriages, two characters hiring the same hit man in order to kill each other, two deaths, and a lot of trickery and manipulation involving pre-nups.

In the leading roles, Clooney and Zeta-Jones have such great chemistry that I'm amazed they've never been paired up again on-screen, though of course Clooney hasn't done a romantic comedy since (I suppose you might make an argument for Leatherheads, but you'd have to have seen Leatherheads first) and Zeta-Jones has aged out of the narrow window of time during which Hollywood productions will consider a woman viable in a romantic pairing, let alone as a lead in a movie. Both are in fine form here, though given Clooney's habit of playing overt comedy with the occasional over-emphasized tic (eyes going wide enough that they look like they're about to pop out of his head seems to be a go-to move), Zeta-Jones fares marginally better through her understated sultriness. While Intolerable Cruelty may not be a major work from the Coens, I think it's a film worthy of some reassessment as an entertaining and often clever comedy.
Posted by Norma Desmond at 8:00 AM