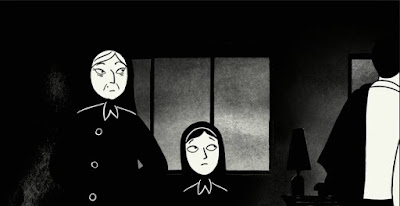 Persepolis, adapted from four autobiographical graphic novels by Marjane Satrapi and directed by her and Vincent Paronnaud, is a truly one of a kind movie that explores a history and point-of-view rarely explored in film, particularly in the Western world: the Iranian Revolution as seen through the eyes of an Iranian woman who lived through it during adolescence. It is a narratively intricate film that sets a coming-of-age story against a story of war and revolution and massive cultural upheaval, weaving its elements together seamlessly to become a moving and beautifully rendered story that is alternately comedic and tragic, as emotionally complex as its story is politically and socially complex.

The story begins with Marjane (voiced by Chiara Mastroianni) as a child in Iran, raised by two liberal leaning parents during the time of the Shah. When the tide finally turns against the Shah, the family, which includes a wide circle of political dissidents, several of whom have experienced jail, torture, and exile as a result of the Shah’s rule, is hopeful that it will result in a more democratic Iran, but those hopes are dashed when Islamic fundamentalists win the election and take power. Suddenly, the social freedoms enjoyed during the period of the Shah disappear as the more oppressive regime of Ayatollah Ruhollah Khomeini is installed and, amongst other things, women’s rights are set back to almost zero. Young Marjane fights against the new social rules, speaking out and questioning people in power, and her parents recognize the danger that she’s courting. Rather than attempt to repress her, they arrange for her to be educated in Austria so that she can have access to some of the freedoms that have been taken away from her.

Living in Austria ends up creating new problems, however. The living arrangements that her parents have made quickly fall through, resulting in Marjane bouncing around from place to place, struggling to fit in and find her place in the world. She becomes friends with a group of kids who identify themselves as punks but are actually just rich kids whose biggest problems are being “forced” to fly to Brazil or some other exotic locale for Christmas with their families, while Marjane spends lonely Christmases alone, separated from her family and worried for them as the Iran-Iraq War rages. She becomes disillusioned with her friends quickly, and later has experiences which leave her disillusioned in love, too. When life in the West becomes unbearable for her – she experiences greater freedom in Austria, but she is also isolated, depressed, and lacking in any kind of support – she returns to Iran, where she once again struggles to find her place and reconcile herself to her surroundings.

Persepolis is a beautifully rendered film which uses animation to blend brutal reality with fantasy and memory. It can be joyful and melancholy in equal turns, as Satrapi expresses her love for her country and what is means to her as well as her disappointment with how religious extremists enact policies which set the country back socially. It’s shocking to consider that within the span of a very short period of time, a country that was as modernized as Iran was (it was a dictatorship, but it was a moderately “Westernized” one) could be so completely changed, and that certain things (such as women’s rights) can be so tenuous as to disappear seemingly overnight once the religious right gains complete political and social control.

The film is very much about how vulnerable women can be made as a result of political and social circumstance, particularly when an extremist group takes control and reduces that population to the level of second class citizen. It is also, however, very much about the harm that can result from foreign interference when powerful “allies” exploit another nation as a means of pursuing their own self-interest. In the case of this story, the supposed ally is the United States, which helped overthrow Iran’s democratic government to install the Shah in exchange for access to oil, and later stoked the flames of the Iran-Iraq War by selling arms to both sides, profiting off the blood of a generation and the suffering of two nations’ worth of ordinary citizens who had to live in a war zone. While Persepolis never argues that dangerous social elements weren’t always present in Iran, as they are in all nations, it doesn’t shy away from pointing out the ways that the United States’ history of manipulating the political situation in Iran has served to bolster and entrench the position of Iran’s religious right. For the film, and of course for Satrapi, the political is incredibly personal and in its exploration of a short period of Iran’s history alongside the history of its protagonist, it is as much an appreciation of the things about her country that Satrapi loves and is proud of, as it is an elegy to the things that have slipped away and forced her into a kind of exile.
Posted by Norma Desmond at 8:00 AM

Such an outstanding movie, this is. It's definitely one of this century's essentials.