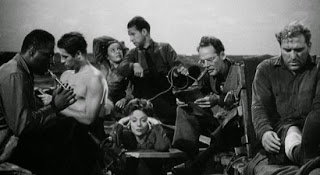 Alfred Hitchcock is one of cinema's most revered directors and his greatest works are still discussed, debated and dissected by film fans and scholars. But, while films like North by Northwest, Rear Window, Vertigo, Psycho and Notorious will always come up when considering Hitchcock's craftsmanship and skill as a filmmaker, films like his 1944 feature Lifeboat seldom seem to get a mention. While Lifeboat isn't "top tier" Hitchcock, it is a film which demonstrates how the director's mastery of form could make an engaging film out of a premise which, on paper, would sound uncinematic. Lifeboat is a film which takes place entirely in its eponymous locale, the characters trapped together in the North Atlantic, at the mercy of the elements and their increasing internal conflict. Though it never quite attains the level of tension of Hitchcock's great thrillers, it is a solidly entertaining film - and, as a plus, it contains what is arguably the director's cleverest cameo.

Lifeboat begins with the sinking of a ship by a U-boat, which is itself sunk in the process, and the gathering of the few survivors in a single lifeboat. Among them are Connie Porter (Tallulah Bankhead), a writer who managed to get most of her possessions into the lifeboat before the ship went down, Kovac (John Hodiak), Gus (William Bendix), Joe (Canada Lee), and Stanley (Hume Cronyn), merchant marines, Rittenhouse (Henry Hull), a wealthy industrialist, Alice (Mary Anderson), a nurse, and Mrs. Higley (Heather Angel), the mother of an infant who has died in the aftermath of the boat sinking. Shortly after they assemble in the lifeboat, another survivor makes his way to them: Willi (Walter Slezak), the lone survivor of the U-boat. While Kovac is prepared to throw Willi overboard immediately, the others object and declare that he's a now a prisoner of war and must be treated as such, and debate about what to do with him becomes secondary to the situation with Mrs. Higley - who clings to her dead infant and then throws herself overboard after him when he's buried at sea - and to the situation with Gus, who was gravely wounded when the ship was sunk and has developed gangrene. Willi, being the only person on board with the experience to do so, amputates Gus' leg, but his assistance does little to soften the feelings of some of the passengers - nor, as it turns out, should it.

An early debate about the direction in which the lifeboat should be steered sets the tone for much of the conflict onboard. In the absence of a compass, the survivors basically have to try to guess which direction they should go in to reach Bermuda and when Willi insists that they should head in one direction, Kovac declares that they'll head the opposite way. While Connie and Rittenhouse initially side with Willi, reasoning that it is in his interest as much as anyone's to get to safety (and that he ought to know how to get to Bermuda since he came from that direction in the U-boat), Stanley and Gus back up Kovac, who thinks that Willi is trying to lure them into a trap. What's particularly interesting about what happens from there is that, despite the fact that a clear line is drawn in the sand between Kovac and Willi, there's no real battle for dominance or leadership between them. Willi more or less just sits back and waits as the elements take their toll on the rest of the survivors and gains control not because he convinces the passengers that they can trust him, but only after they've realized that he's been deceiving them. Though he's outnumbered on the boat 7 to 1, the situation becomes so dire that Willi is able to get the upper hand and the others all become his prisoners, with even an exhausted Kovac basically giving up and letting Willi row them into the hands of the Nazis.

Watching Lifeboat from the perspective of 2014, it's odd to look back at how the film was initially received upon its release and find that it received criticism for portraying its German character too positively. I'm somewhat baffled about what, exactly, is meant to be positive about the depiction of Willi, other than the fact that he never gives up. He repeatedly deceives the people who saved his life, he secretly hoards fresh water while the rest of the passengers are dying from thirst, and he straight up murders one of them - and when the opening scene is echoed in the finale and another German ends up on the boat, he proves equally quick to turn on the people who have rescued him. The film is pretty clear in its point-of-view that Germans are the enemy, untrustworthy and waiting only for the first sign of weakness in order to pounce, and when one of the non-German characters expresses the view that the Germans ought to all be "exterminated," it doesn't play like an ironic pronouncement, but a serious suggestion.

During the course of the film's 96 minutes, Hitchcock throws a lot at the characters in order to maintain a sense of movement that effectively counteracts the static nature of the setting. Storms hit, amputations are performed, romances blossom, and relationships shift as the characters transition from the belief that rescue is imminent to the knowledge that they're on their own and will live or die by their own abilities. As a drama, Lifeboat mostly works, drumming up enough internal conflict between the survivors to make it seem as if something new is always happening, even as the narrative is just biding its time as it unravels the truth about Willi's character beat by beat. The two romantic plots are sort of pat, though scenes between Kovac and Connie provide Bankhead, giving easily the film's best performance, with some of her finer moments and better lines (the secondary romance is between Stanley and Alice). While Lifeboat doesn't have quite the same kick as Hitchcock's best films, it's still a fine example of the director's ability to tell a complete story even while doing so within strict formalist limits.
Posted by Norma Desmond at 8:00 AM

I haven't seen Life Boat for a long time. Doesn't it have a rather gruesome ending?

Depends what you mean by "gruesome." It's violent, certainly.