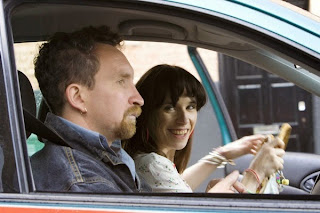 Mike Leigh isn’t necessarily known for comedy – his films tend to be more of the plumbing the depths of everyday, ordinary despair variety – but his 2008 film Happy-Go-Lucky is one of the most joyful films to come out in the past decade. I say this despite the fact that one of the film’s secondary characters is a horribly miserable man who finally explodes with rage and violence in the film’s final act. It’s the film’s main character, though, which gives it such a sunny disposition. In one of those career defining performances, Sally Hawkins stars as Poppy, a relentless force of positivity who manages to see the glass as half full at every turn. In the hands of a lesser actress, not to mention a lesser director, Poppy would be an insufferable character, the kind that could sink a film like this before it even got off the ground. Instead she lifts it up, raising it to match her own very high spirits.

Happy-Go-Lucky is a slice of life type story which follows Poppy through various short adventures: she’s a grade school teacher who, late in the film, gains the confidence of a student who is being abused at home and as a result is lashing out in class, and she also begins a tentative romance with his social worker. She has a roommate, Zoe (Alexis Zegerman), who is also a teacher and is a low-key, grounded force that nicely balances out Poppy’s more effusive personality. She has two sisters, one of whom is married and expecting her first baby, the other of whom is in University, and finds herself playing the role of unofficial mediator between them. The film’s main story thread, though, is Poppy’s relationship with her driving instructor, Scott (Eddie Marsan), who is as miserable as she is happy. While Poppy approaches the world with arms wide open and tries to empathize with everyone she meets (including Scott), Scott sees everyone as a potential enemy and reacts to them as such, though he nevertheless seems confused when his attempt to ask Poppy out results in rejection. The scenes between Poppy and Scott manage to alternate between being funny, scary, and sad, as Marsan’s performance reveals his character to be tightly-wound and deeply wounded, while Hawkins’ brings deeper shades to her character as she navigates this complex and so often volatile relationship, showing that there’s more to Poppy than just a shimmering surface of happiness.

The key to Happy-Go-Lucky’s success is the sincerity of Hawkins’ performance, the way that her happy outlook never feels like a put on or an act. Her positive outlook, unflagging even in the face of hostility from others, is just the way that she is and her determination to see the bright side of things sets the tone for how she engages with the world at every moment. She can be serious, as she is when dealing with her troubled student or late in her relationship with Scott as she tries to get to the root of his anger, but the warmth of the character always comes through. Performances like the one Hawkins gives here are so deceptively simple looking that they often go unnoticed; Poppy is, essentially, a nice person, an ordinary person. While the film visits her in a variety of situations, it doesn’t have Hawkins jumping through a series of emotional hoops, requiring instead that she deliver a more understated, less flashy performance grounded in normalcy. That’s like hiding a character in plain sight, and in this case it’s all the more so because Hawkins’ performance is natural to the point of being invisible.

“Naturalness” is the cornerstone of Leigh’s work as a whole, rooted as it is in improvisation and collaboration between him and his actors in creating the characters and their stories. But the improvisational aspect of his work should never be confused for a lack of ultimate control, as all Leigh’s work has a firm hand guiding it. Happy-Go-Lucky feels loose, but it doesn’t just meander from one adventure to another; the storytelling has a great rhythm to it which manages to feel natural and free flowing even as that flow is being managed by Leigh and directed towards a very specific emotional space – one which offers not catharsis, but rather affirmation of what has been expressed all along: life is good, and though there may be moments of darkness, it’s the lightness that counts. In a career that has spanned more than 40 years, Leigh has made a number of great films and a couple of outright masterpieces. Happy-Go-Lucky is one of those masterpieces.
Posted by Norma Desmond at 8:00 AM