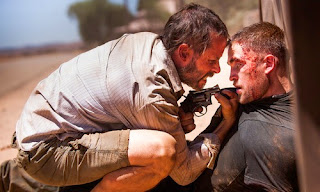 The Rover, writer/director David Michod's follow up to his brilliant 2010 debut Animal Kingdom, is a brutal and bleak vision of the future. Set in Australia a decade after a global economic collapse has turned the landscape into a desolate wasteland where life is cheap and violence comes easy, the film isn't science fiction so much as a good old fashioned western about a loner riding the plains in search of the men who wronged him, pushing further and further into the frontier. On a performance level, and often on a technical level, The Rover is a very good movie and I have no doubt that it will find many champions, yet as I finished watching it I was left cold. Individual pieces of the film are brilliant but, taken as a whole, the narrative starts to seem relentlessly prosaic the longer it carries on, which left me feeling split on the result. In the end, I think that The Rover is a decent movie, but one which doesn't really have anything new or different to say.

The year in which The Rover is set is never defined beyond the fact that it is "ten years after the collapse." We're introduced first to Eric (Guy Pearce), a man of few words and a thousand yard stare, who walks into a bar that is rather optimistically blaring music for the sake of customers who no longer exist. Next we meet a trio of thieves - Henry (Scott McNairy), Archie (David Field), and Caleb (Tawanda Manyimo) - fleeing the scene of a robbery and arguing about their fourth member, Henry's brother Rey (Robert Pattinson), who was left behind in the chaos. After crashing their truck outside the bar, they steal Eric's car and he gives chase, intent on retrieving it. A confrontation down the road leaves Eric unconscious but no less determined, and after wandering into the nearest town (or what still passes for a "town" in a world where everything, including human beings, seems scarce) and procuring a gun, Eric's path crosses with that of Rey, who is dying from the wounds he incurred during the robbery. Having been told of a doctor living outside of town, Eric takes Rey to her and she performs surgery on him, but Eric's misdeeds in the town quickly catch up to him, resulting in the doctor's companion being murdered and Eric in turn killing the assailants before dragging Rey off, forcing him to take him to where his brother and his partners have gone.

Rey, who is simple minded and vulnerable even when he's holding a gun, is vague about the whereabouts of his brother, only telling Eric that he was going "south." As they head south, Eric is able to get the name of the actual town where they're going out of Rey, who briefly believes that he has the upper hand because knowing where in town his brother will be means that Eric can't leave him behind, until Eric rains on his parade by telling him that he has no intention of leaving him behind because if he gets to the destination and Henry isn't there, he intends to murder Rey in his place. As they approach their destination, they have two encounters with the army, one in which Rey engages in a shootout with a soldier which results in a child bystander being killed and then the soldier being killed by Eric, and one in which a trio of soldiers get the drop on Eric and arrest him while Rey watches from a distance. It seems like it's over for Eric, and that seems almost like a relief to him, but he doesn't count on the fact that Rey, like an abused dog, will try protect his master no matter how cruelly he's treated by him, or that somehow during their journey Rey's loyalties are transferred from Henry to Eric, leading to an inevitably grim and violent finale.

Because it is set in Australia and the plot involves anarchy and car chases, The Rover can't help but bring to mind the Mad Max series, though this film never develops the gonzo aesthetic of George Miller's flamboyant vision of the future. The Rover is a lot more staid, depicting a world that is sparsely populated and stripped down to the bare essentials, but which still has some remnants of infrastructure. Though the value of currency is more symbolic than anything here, money (rather, American money) is still traded among the rabble, and the fact that there's still a military force and running trains suggests that there's still some level of organized power in the world, even if it exists only in small clusters. Though it declares itself as taking place "after the collapse," the world of The Rover is ultimately one that has only collapsed in most respects and is still in the process of a complete breakdown, which is one of the more interesting things about it. There is still some semblance of order, or people clinging to what they remember "order" to look like, but it is underscored by an intense sense of desperation because everyone knows that even this is in the process of slipping away forever. When Eric finally delivers the dialogue explaining why and how he's become so broken, it's the loss of consequences that he describes as haunting him the most. Nothing that happens now matters and humanity has become unmoored as a result.

Much of what happens in The Rover unfolds with a sense of ruthless inevitability, which is due as much to the internal logistics of the narrative as it is to the fact that this basic premise has already been explored so many times before. Male protagonist (usually white, unless Denzel Washington or Will Smith is available) who looks like an everyman, but has the survival skills of a superman, wanders through a violent post-Apocalyptic landscape - countless movies that envision a future after the end of society as we know it see it through this particular lens, which leaves The Rover feeling overly familiar and rote. Following Eric and Rey's encounter with the doctor, who lives on a property rigged with warning alarms for whenever someone enters it and greets visitors with a shotgun, I couldn't help but think how much more interesting an exploration of the "after society" premise might be if it were told from the perspective of a female character, particularly in light of the fact that men seem to outnumber women in the film's world by about 6 to 1. Later still, following the umpteenth time Eric proves to be a proficient killing machine, I started to think about Jeremy Saulnier's Blue Ruin and how that film put a new spin on the thriller genre by making its protagonist incredibly inept at pulling off the revenge plot he's developed, and wondered what the film might look like if it were told from Rey's perspective, where survival and triumph wouldn't seem like such a given. None of this is meant to be a knock on Pearce's performance, as his tightly coiled depiction of Eric is one of the things that nudged me towards ultimately recommending the film (the other thing being the shockingly strong performance by Pattinson), it's just that everything that seems original and unique in The Rover is surrounded by the expected elements from the usual bag of tricks, so that it drains away whatever freshness the film can be said to have. Still, those performances are great.
Posted by Norma Desmond at 8:00 AM