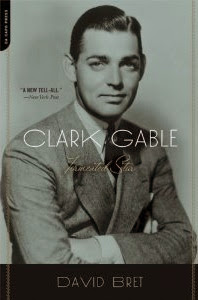 This book is garbage. Even by the astonishingly low standards of trashy celebrity biographies, Clark Gable: Tormented Star stands out as particularly seedy and exceedingly worthless. This isn't a biography. It's a work of fan fiction which imagines that all the stars of yesteryear, but particularly the men, were only ever incidentally heterosexual, padded out with multi-page synopses of several of Clark Gable's films. The best thing I can say about the book is that, even with all that padding, it's a slim volume that runs to only 259 pages in paperback form, so at least it doesn't waste too much of your time. But, rest assured, that even though it won't waste "too much" of your time, it will waste your time, unless you like your books full of errors so brazen that they practically jump off the page and smack you in the face.

In the interest of fairness, author David Bret lays his cards out as early as the table of contents, revealing the titles of the introduction and the first chapter as, respectively, "A Hunk of Rough" and "Gay for Pay: Ascending the Lavender Ladder." Bret's thesis is that Gable (and pretty much every other actor of his era, more or less) was a repressed homosexual, and his interest in exploring any other facet of Gable's existence is only nominal. That's fine; all books need a point-of-view and Bret isn't the first to suggest that Gable broke into Hollywood by using the casting couch, but the way that Bret goes about supporting his claims is problematic in a number of ways. For one thing, he uses the terms "homosexual," "bisexual," and "gay for pay" interchangeably - accuracy doesn't matter here; the only thing Bret seems to care about is that all roads somehow lead to Gable in bed with another man. For another thing, Bret pushes the notion that Gable's liaisons with men (and some women) were only a means for him to climb the Hollywood ladder, while also insisting that the list of male lovers included men who, realistically, were in no position to have any kind of influence on his professional career. Most damningly of all, Bret's most frequently cited source of information is Kenneth Anger's Hollywood Babylon, a book which is well-known for being full of crap, with many of its most famous anecdotes having been thoroughly debunked.

Gable may have been gay. He may have been bisexual. He may have used sex, primarily, as a means to gain financial success. He may also have been the intense paranoiac depicted in this book who spent the better part of his adult life worried that his secret (though not that "secret" given the sheer number of people he allegedly worried were already in the know) same-sex dalliances would be exposed. Anything is possible and it's certainly no secret that there have been gay men and women working in the film industry for as long as the film industry has existed, and that many of those people were forced to live double lives so that they appeared to be heterosexual in the eyes of the public. But given how lazily inaccurate Clark Gable: Tormented Star is about other very basic facts, you can't accept anything that it has to say about Gable's private life as gospel. Among the most baffling and egregious errors in the book:

* "Reputedly out of respect for Irving Thalberg, [Norma Shearer] never married again [after his death]." An interesting statement given that Shearer was married to a man named Martin Arrouge from 1948 until her death in 1983.

* That Carrol Baker, his co-star in 1959's But Not For Me "a few years earlier had shocked Middle America with her portrayal of the mentally retarded teenage sex kitten in Lolita." Lolita was released in 1962 and starred Sue Lyon. The "shocking" film Baker starred in was 1956's Baby Doll.

* "Ernst Lubitsch, the director of Carole's final film To Be Or Not To Be was absolutely beyond reproach - though Carole suspected his German majordom was not all that it seemed. The FBI was brought in to investigate: he was found to be involved with a Nazi espionage ring, arrested and interned." I have no idea whether or not this is true, but I could find no reference to Lubitsch ever having been arrested and interned as a Nazi spy anywhere else, and given that he released 6 films between 1939 and 1945, I'm not sure when there would have been time for him to have been held in detention for any period, and given that he was awarded an honorary Oscar in 1947, an honor AMPAS would be unlikely to bestow on someone who had been arrested as a spy a couple of years earlier, I find this assertion by Bret to be rather dubious.

I'm not sure how any reader could be expected to trust any of the assertions of "fact" made by this book when it is so poorly researched that so many easily verifiable things (there are more than those listed above; those are just the ones that stand out the most) slip through the cracks. At a certain point you start to wonder whether it's even intended to be a serious book at all, or just a massive exercise in trolling.

Clark Gable: Tormented Star is a bad biography because you can't trust as fact anything that it says, and it's a bad read because it's also very poorly written, with a deep running current of misogyny throughout. Gable himself comes off very poorly in Bret's recounting of his life, but his depiction is nothing compared to the absolute trashing given to every woman who ever came into contact with him, save and except Carole Lombard. This is an ugly book that has nothing of value to offer even the most casual fan of either movies or celebrity gossip. Bret is a prolific writer who over the past 14 years alone has released 11 biographies on subjects that include Doris Day, Jean Harlow, Rock Hudson, and Errol Flynn. 11 books in 14 years is an impressive feat, though if all of his books are as thoroughly researched as this one, I have to imagine that each only took about an afternoon to write.