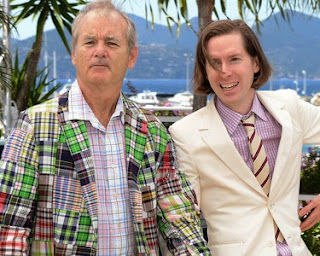 It's almost impossible, at this point, not to think of Bill Murray when thinking of Wes Anderson. Murray has become part of the fabric of Anderson's work, a mainstay who, even when the role is small, always brings something essential to the work. Murray has had a role in every one of Anderson's films since his debut Bottle Rocket, and though Murray's absence isn't the only thing that makes Bottle Rocket feel the least "Wes Andersony" of the auteur's work, it's definitely odd to revisit that film now because it almost feels like it's missing a piece. Anderson has several actors that he's collaborated with many times, but no one seems to encapsulate the Anderson universe in quite the same way as Murray. So often, Anderson's films function to find the sadness is humor and the humor in sadness and as an actor, Murray meets that objective note for note. 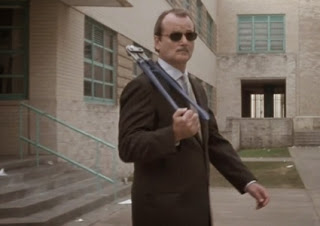 Rushmore (1998)
An argument could be made that Murray's performance in Rushmore is the best he's ever given. As Herman Blume, a role which Anderson wrote specifically for him, Murray taps into such finely honed angst that the character is as tragic as he is funny. A self-made millionaire who, despite his success, can't seem to stop thinking of himself as a loser, Murray's Blume is like the yin to Jason Schwartzman's yang, his despondency the perfect complement to Schwartzman's enthusiasm. The comfort of the partnership between Anderson and Murray is immediately apparent; watching this particular actor in this particular director's films is like seeing something click into place, and Murray's performance here is at once off-kilter and terrifically grounded. He's a performer who can express a lot while seemingly doing little, and Anderson uses that to great effect, letting Murray do his thing and allowing the performance to breathe and settle into place within Anderson's storytelling style. While Schwartzman leads the way as the film's hero Max Fischer, Murray's strong presence anchors the film, allowing it to take off towards such wild, wonderful heights. 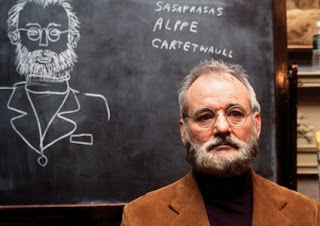 The Royal Tenenbaums (2001)
The Royal Tenenbaums is a movie so dry that it could start a forest fire. While all the actors, save an exuberant Gene Hackman as Royal Tenenbaum and Grant Rosenmeyer and Jonah Meyerson as his grandsons, play their roles at the same modulated key, Murray's Raleigh St. Clair stands out as particularly despondent in a sea of characters who are, at least, semi-depressed. Playing a man married to Gwyneth Paltrow's Margot Tenenbaum, Murray helps subvert the common image of the older man with the much younger wife who has attracted her through his power and wealth: Margot already has money, after all, and she also appears to have pretty much all the power in the relationship. Raleigh is hanging on for as long as he can, knowing that it's only a matter of when the marriage will come to an end, and Murray's reading of lines such as "You don't love me anymore" or "She smokes" (this after reading the P.I. report revealing Margot's numerous affairs) betrays the fact that Raleigh has seen the writing on the wall and has merely been waiting for someone else to read the words out loud. Like Owen Wilson's Eli Cash, Raleigh is a character who exists on the outside looking in at the Tenenbaum clan, but unlike Eli, Raleigh seems to have accepted that status and is content to merely to be allowed to bask for a time in the Tenenbaums' damaged glow, even if it comes at a heavy price. In a film in which every actor is given an opportunity to shine and runs with it, it's difficult to say that anyone is the standout but Murray's performance can definitely be said to enrich an already incredibly rich film. 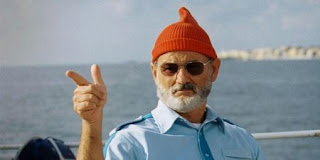 The Life Aquatic with Steve Zissou (2005)
The Life Aquatic sees Murray front and centre, playing the eponymous oceanographer as he plays out his own version of Moby Dick with the "Jaguar shark" that ate his partner. While the film explores various themes and has several plot threads, it is ultimately a film about grief and depression. The specter of the death of Zissou's partner hangs over the film and Zissou spends the narrative in mourning, though he's distracted from that from time to time by other interests, such as his potential son, a potential new lover, and continuing pursuit of the Jaguar shark. The film characterizes Zissou almost as if he's bipolar, given to ecstatic highs and then bottomless lows, and Murray's performance mirrors that narrative construction, allowing Zissou to be alternately energetic and miserable, aggressive and loving. Above all, though, Zissou is grappling with mortality, with the grief of the friend he's lost and with the anxiety over the shape his own legacy will take once he's dead. While The Life Aquatic is far from my favorite Anderson film, Murray's reading of the line, "I wonder if it remembers me," once Zissou finally comes face to face with the Jaguar shark again, is one of my favorite line readings in all Anderson's films. That one statement contains the entire point of the story - the anxiety that people feel about death is as much about what, if anything, we experience after we die as it is about how we live on in the minds of others. Will we be remembered, how will we be remembered, how long will we be remembered, were we as important to others as they were to us? Those are the questions that are nestled within Zissou's statement and the naked vulnerability of that moment reveals why Murray was the perfect actor to anchor a story like this. 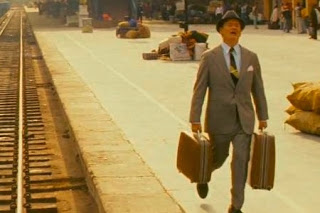 The Darjeeling Limited (2007)
Murray's role in The Darjeeling Limited is only a cameo, playing a character credited as "The Businessman" who shows up long enough to rush, but nevertheless fail, to catch a train. To describe how even such a minor character can nevertheless bring something vital to a film, Matt Zoller Seitz perhaps puts it best in his book The Wes Anderson Collection: "Peter and his siblings are younger versions of the Businessman – pampered, myopic Americans who rush through life, oblivious to the world around them.” The role of The Businessman is outwardly a "nothing" part but, as argued in Zoller Seitz's book, when viewed symbolically it can actually be considered an "everything" part, and though it can be argued that The Businessman could have been played by anyone, the fact that he's played by Murray is what draws the viewer's attention to him in the first place, thus allowing him to take on that symbolic meaning. Still, India's a long way to go to film such a small role, which I suppose is a testament to Murray's affection for Anderson. 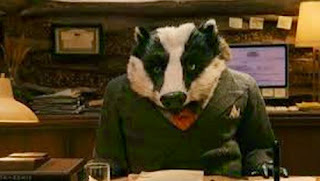 Fantastic Mr. Fox (2009)
It can be difficult sometimes to evaluate a voice performance, but while Anderson's meticulous attention to detail goes a long way towards Fantastic Mr. Fox's success in terms of bringing Roald Dahl's world to life in such brilliant fashion, the sharp precision of the voice performances (led by George Clooney as the eponymous Mr. Fox) do their share of the heavy lifting. The result is an often enchanting film and Murray's performance as Badger, Mr. Fox's lawyer who sort of looks like a gangster but whose demeanor is a lot more laid back than that description would suggest, is pretty much perfect and helps bring an extra layer of charm to the film. 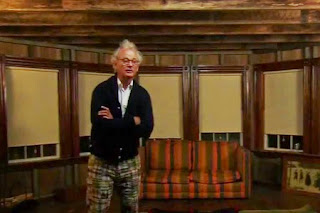 Moonrise Kingdom (2012)
In Moonrise Kingdom Murray's role might be described as the "authority figure," seeing as his Walter Bishop is the major force standing in the way of the film's pre-teen protagonists, Sam and Suzi. Deeply unhappy in his own relationship ("I hope the roof flies off and I get sucked up into space. You'll be better off without me," he laments at one point to his wife), he channels his energy into finding Suzi and separating her from Sam; disappointed in his own now soured relationship, he can only seek to snuff out the precocious romance of his daughter and the orphaned ex-Scout. Murray's performance here is weary and melancholy, but in that way that is very specific to Anderson films where sadness becomes another shade of comedy. No matter what role he's playing, Murray manages to fit perfectly into Anderson's films, by this point having become a fixture whose presence helps orient the viewer to the tones that Anderson prefers to strike and engendering a sense of familiarity that makes the stylized nature of Anderson's work seem marginally less strange. 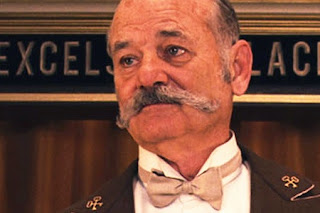 The Grand Budapest Hotel (2014)
As with The Darjeeling Limited, Murray's role in The Grand Budapest Hotel is a small one, but it nevertheless manages to leave an impression. As Monsieur Ivan, one of several members of the Society of Crossed Keys, his part in the film consists of really nothing more than acting as one leg in a relay consisting of several other character actors and Anderson regulars, but even if the role isn't big, Murray still makes an impression. Personally, I couldn't help but break out into a grin the second he popped up on screen, he's just such a welcome and familiar presence in the Anderson world.

Before teaming up with Anderson, Murray was in a bit of a strange place in his career. The "superstar" phase defined by films like Caddyshack, Ghostbusters and Groundhog Day were behind him, and though he had made forays into character parts in films like Ed Wood, he was clearly in a transitional period, trying to figure out what direction to go in as he shifted his career away from big studio comedies. With Rushmore he became, almost immediately, a valued indie actor and finally started gaining respect for his ability to act, in addition for his ability to make audiences laugh. Before Rushmore there were films like Larger than Life and The Man Who Knew Too Little. After Rushmore, in addition to Anderson's films, there were films like Lost in Translation and Broken Flowers (and, sure, a couple of Garfields, too; nobody's perfect). The relationship has been beneficial for Anderson, too, of course. While Bottle Rocket is a good film that announced him as a director who would be worth watching as he matured and developed, his style as we know it now really started to gel once he began working with Murray, who so wonderfully embodies Anderson's directorial voice. There's no word yet on where their collaboration may take them next, but one thing's for sure: it'll be worth watching.

Next Time: George Cukor & Katherine Hepburn
Posted by Norma Desmond at 8:00 AM