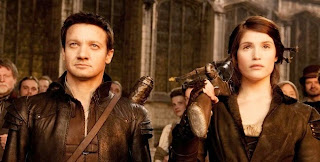 This recommendation apparently stems from my interest in Pan's Labyrinth, Hanna and previous Netflix Recommends entry Jack Reacher. I can kinda see a faint connection between Pan's and Hansel & Gretel: Witch Hunters insofar as both are fantasy films, though the former is a masterpiece that transcends genre while the latter is a reasonably entertaining steampunk reimagining of a fairy tale that revels in genre trappings, but I'm not really sure about the connection with the other two, besides the fact that all three films have scenes of action and violence. At any rate, I called Netflix's bluff and watched Hansel & Gretel: Witch Hunters expecting little but actually kind of liking it in all its ridiculousness. Had I looked into it beforehand and known that it comes from the writer/director of the dumb/awesome Nazi zombie movie Dead Snow, and is produced by Will Farrell and Adam McKay, I might have been more prepared for how generally enjoyable it is (aside: after Farrell's name popped up in the credits, my first thought every time Jeremy Renner showed up on screen was, "That damn Hansel, he's so hot right now!"). Hansel & Gretel: Witch Hunters is ridiculous. But it knows that it's ridiculous and doesn't waste time trying to convince you otherwise, instead just getting to the business at hand and delivering on the promise of its title. Witches do, indeed, get hunted in this film and get killed (along with some other baddies) in grand fashion - though the story's real villain is ultimately diabetes.

The film begins with a prologue which plays out the Hansel and Gretel story as it is popularly known, with the two young children being taken out into the woods and abandoned by their father, stumbling on a house made of candy, being captured by a witch who plans to fatten them up and then eat them until they manage to kill her. From that point on, according to the film, Hansel (Renner) and Gretel (Gemma Arterton) earn fame and fortune traveling around and hunting witches, whose spells they seem to be immune to. Their reputation results in the mayor of Augsburg hiring them to investigate a recent spate of kidnappings which are believed to have been committed by a witch, and they arrive in the village just in time to stop the Sheriff (Peter Stormare) from executing Mina (Pihla Viitala), a woman whom Hansel and Gretel immediately determine is not a witch at all, but an innocent woman about to become the victim of hysteria. Their actions make an enemy of the Sheriff, who fights them every step of the way as they try to find the real witch and who plots to avenge himself for the public humiliation he received at their (but mostly Gretel's) hands.

After capturing a member of a coven, Hansel and Gretel realize that there is a pattern to the kidnappings that ties into a ritual that is to take place on the night of the Blood Moon, and in doing so are able to identify the next child who will be kidnapped from the village. However, before they can find the girl, the grand witch Muriel (Famke Janssen) attacks the village, rescuing her captured cohort while Edward, a troll in her service, makes off with the final child needed to complete the ritual. Hansel and Gretel end up separated during the attack, with Gretel being knocked out by Muriel but taken away to safety by Ben (Thomas Mann), a young admirer who hopes to become a witch hunter himself, and Hansel being dragged out into the woods where he's found the next day by Mina. When Hansel and Gretel finally find their way back to each other, they discover that their travels have brought them back to the place where it all began: their childhood home. Discovering a long abandoned witch's lair underneath the house, Hansel and Gretel learn that there was more to their origin story than they knew and that there are a few things about witches that they don't know, either. With the Blood Moon approaching and witches from all over the land converging to partake in the ritual, Hansel and Gretel must find a way to stop the ritual from taking place, save the abducted children, and destroy Muriel before she can become any more powerful.

Hansel & Gretel: Witch Hunters sets its tone pretty much immediately as the now grown up Hansel summarizes via voiceover the steep learning curve he and Gretel experienced in their first encounter with a witch: "One, never walk into a house made of candy. Two, if you're gonna kill a witch, set her ass on fire." The film has a far more irreverent/comedic bent than the advertising leading up to it's theatrical release suggested, which is maybe part of the reason why the film didn't fare very well at the domestic box office. The advertising emphasized action, which the film does contain, but it downplayed the humor and light horror aspects of the piece, which turn out to be its greatest assets. Hansel & Gretel is a film that doesn't take itself terribly seriously (if it takes itself seriously at all), taking a more playful approach to its sequences of action and gore than might be expected and hitting the genre beats that dictate the narrative's direction with casual efficiency. Hansel & Gretel feels relaxed where other films of its type merely feel labored, and it does a decent job at playing out what is ultimately the origin story chapter of a would-be franchise in which the team that will go on to further adventures is assembled.

All that said, while Hansel & Gretel is fairly entertaining and comfortable in its own skin, I wouldn't call it "good" per se. Its depiction of women is sometimes troubling, not just because of the sheer amount of violence against women in the story (a facet which is, of course, not unexpected given the premise and title), but because even the "good" female characters who are there to be more than just canon fodder are still little more than appendages for the male characters. Gretel and, to a lesser extent, Mina both prove themselves to be capable in the action scenes, but Mina's purpose in the story is basically to be a helper maiden to Hansel, healing him when he's injured, providing him with sexual release, and enlightening him to the fact that good witches exist alongside bad witches. Gretel, meanwhile, is a capable badass when the film needs her to be, and a damsel in distress when the film needs her to be that, reduced from being Hansel's partner in the first half to being another figure for him to protect and save in the second (he, meanwhile, is never anything but capable and heroic). It's a disappointing turn which leaves Hansel & Gretel feeling a bit uneven but, all told, the film is an enjoyable enough diversion that mostly hits the sweet spot between "dumb" and "dumb fun."
Posted by Norma Desmond at 8:00 AM