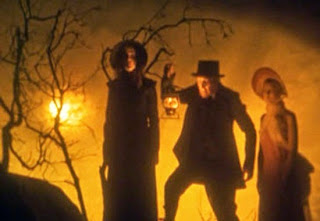 Filmmaker Guy Maddin approaches things from outside the box. To get an idea of just how far outside, you need only consider two of his initial casting ideas for a key character in Careful: Martin Scorsese and hockey hall of famer Bobby Hull. Scorsese may not be too out there as a choice given that he has acting credits to his name for small roles/cameos. But Bobby Hull? That's an idea that takes some imagination to come up with. Neither man ended up in the film (Scorsese reportedly had to drop out due to his commitments to Cape Fear), but the idea of either is intriguingly odd. However, as odd as those ideas may be, they could never be quite so odd that they couldn't be made to fit with Careful, Maddin's homage to the German "mountain films" of the 1920s and early 1930s, but with a very Maddin-esque take on a classic form.

In the village of Tolzbad (named for Maddin's frequent collaborator, George Toles), the constant fear of triggering a devastating avalanche has made citizens reticent to speak above a whisper or express their emotions openly. The film opens with the children of Tolzbad receiving a lecture about what they should and should not do in order to ensure that they maintain the safety of Tolzbad, and then it moves on to brothers Johann (Brent Neale) and Grigorss (Kyle McCulloch), both of whom are in butler school in the hope that they might one day serve Count Knotkers (Paul Cox). Johann and Grigorss live with their mother, Zenaida (Gosia Dobrowolska) and their brother Franz (Vince Rimmer), exiled to the attic because he reminds Zenaida of her late husband, whom she detests. Though he’s engaged to Klara (Sarah Neville), Johann becomes sexually obsessed with Zenaida, which drives him to self-harm and then suicide.

In the wake of Johann’s death, Zenaida reveals that not only does she love Count Knotkers, but that she was thinking of him when both Johann and Grigorss were conceived. In an effort to avenge the honor of his dead father, Grigorss challenges the Count to a duel and Zenaida is only able to talk him out of it by promising to finally allow Franz to be a part of the family. The peace she negotiates is short-lived, however, as Klara, whom Grigorss has always secretly loved, seduces him into following through with the duel as part of a larger scheme to get revenge against her own father (Victor Cowie) due to his favoritism for her sister, Sigleinde (Katya Gardner). As the film moves towards its dramatic end, two families are torn apart by violence, leaving only their truly innocent members behind to pick up the pieces.

Like many Maddin films, Careful is a film preoccupied with sexual taboos. The title refers to the necessity that the villagers keep all activity to a low volume so as not to trigger an avalanche (a premise the film has a lot of fun with, particularly in a scene in which Johann and Klara say goodnight and then continue calling out to each other as they go their separate ways, having to stage whisper in order to remain within the bounds of acceptable behavior in Tolzbad), but it might as well also refer to the passions of its characters. The parents who openly favor one (or two, in Zenaida’s case) of their children over another, and the children who become focused on their parent to the point of all-consuming obsession, are not "careful" enough. They behave recklessly, undermining the fabric of the “family” and crossing boundaries that can only lead to destruction.

The destruction unleashed in the film - falling with the momentum of dominoes as one crossing of boundaries leads into another – proceeds in darkly gleeful fashion as Maddin raises the pitch of the melodrama so that it just starts to graze the comedic and then drops suddenly towards the horrific. Johann’s obsession with Zenaida, for example, ends with a sequence of disturbing violence, but before it gets to that point it features a scene of Johann hanging upside down in a chimney so that he can spy on Zenaida while she bathes, an image which can’t help but be at least as funny as it is creepy. As a filmmaker, Maddin is capable of bringing a highly distinctive style to his projects without burdening them with a lot of auteur heaviness or self-seriousness in the process. His films always have a sense of humor (albeit a bizarre one) that shines through to give his films a sense of lightness even as they unpack layer upon layer of thematic preoccupation and play around a lot with form. His films can be challenging but are ultimately not as inaccessible as they might at first seem, and they brim with the joy in artistry that not all films have. Careful is probably not the ideal choice if you’re looking for a place to start with Maddin (My Winnipeg is probably the most “user friendly” of all his films so far and therefore the best primer to explore his work as a whole), but once you’ve seen enough of his work to have a basic sense of the strangeness of his world, Careful is a film of dark charm and utterly engrossing weirdness.
Posted by Norma Desmond at 8:00 AM