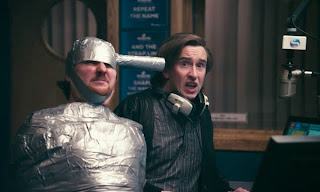 Steve Coogan is a very funny performer. Why his popularity in his native England hasn't really translated to this side of the Atlantic is one of our great entertainment related mysteries. His Alan Partridge character is one that I had heard of previously, but never seen in action before and having now watched Alan Partridge, I can definitely understand why the character has enjoyed such longevity and made so many appearances in TV and radio series. Alan Partridge is a highly entertaining film which deftly combines dry wit with physical comedy and a fairly incisive satire about celebrity culture. It's also totally accessible to those of us who have no previous experience with the character, though I imagine that there are probably a few references that require previous experience in order to be fully appreciated.

As the film opens, the Norwich radio station where Alan Partridge (Coogan) hosts the mid-morning program alongside Sidekick Simon (Tim Key) is being taken over by a conglomerate and about to undergo extensive "rebranding." Though Alan is not, at first, concerned about the possibility of being shuffled out the door, after his more paranoid co-worker Pat Farrell (Colm Meaney) talks him into talking to the brass, he realizes that they're planning to cut either him or Pat. Desperate to save himself, Alan quickly switches gears from defending Pat as a reliable draw for an older audience to declaring that the thing to do is fire Pat (or "Just Sack Pat," as he writes on the flip chart at the front of the room). The brass do just that, sending Pat off without even allowing him to have one final show to bid farewell to his listeners, resulting in a disgruntled Pat returning to the radio station with a shot gun and taking everyone in the building hostage. Alan escapes and gets to the police station, but when Pat declares that he'll only communicate with the police through Alan (who he believes is his friend, as he doesn't know about Alan's boardroom betrayal), it means that Alan is going to have to go back into the building.

Although he's understandably nervous about going back into the station, especially once he's seen what has become of Sidekick Simon (who, incidentally, wasn't able to escape being a hostage because Alan accidentally knocked him out with a fire extinguisher and then left him behind), who is duct tapped to a chair and has a special duct tape helmet which allows Pat to keep the gun to his head even when he isn't holding on to it, Alan quickly begins to see the bright side of being part of the siege. Not only does he get attention from the broadcast that he, Pat and Sidekick Simon host during the siege, but as the intermediary between Pat and the police, and by extension Pat and the media, he gets an even bigger spotlight to bask in. After accidentally getting himself locked out of the radio station (and ending up bottomless after an ill-fated attempt to sneak back into the building), he's dismissed by the police for his astonishing ineffectiveness, only to be brought back in by Pat and, in the process, accidentally screw up the police's plan to bring the siege to an end. In the ensuing chaos the police storm the building, but Alan, wanting to extend the ride just a little bit longer, decides to take the siege on the road by jumping into the station's bus with Pat and making their show mobile. As they engage in a low speed chase through the town's streets (all while putting on their radio program), things are going splendidly - that is, until that "Just Sack Pat" message comes back to haunt Alan.

With a screenplay co-written in part by Coogan and Armando Iannucci (who has In the Loop and the TV series Veep, among other things, to his credit), Alan Partridge is a sharp and keenly observed comedy about, in part, the nature of celebrity in the "viral" age. Alan, though in his own mind he's still a relevant star, starts to get a taste of the real thing again once the siege becomes a media sensation and gets his face (and other parts, after he's caught without his pants) splashed across multiple TV networks, so rather than trying to help bring the situation to a safe end (though he does from time to time, fantasize about playing the hero by taking Pat down), he instead makes the most of the attention coming his way by performing for an audience of media and police (in addition for the radio audience listening to his broadcasts with Pat), and impressing one of the station's new owners enough that he's offered the prime breakfast spot. It's notoriety, but that's good enough for Alan because notoriety is the easiest and most common form of celebrity now - whether its the result of something dumb, terrible, or in between, as long as there's a camera present it will be enough to make a star out of someone. So he'll happily ride around with Pat in a bus, hosting a radio program at gunpoint for as long as people will pay attention - or, until Pat starts actively trying to kill him.

Alan Partridge works in no small part because of Coogan's performance, which nails both the big pieces of broad comedy as well as the type of verbal comedy that requires a much lighter touch, such as when Alan puts his "question of the day" to his listeners, asking, "What is the worst monger? Iron, fish, rumor, or war," and then remarks that the answer seems obvious. Alan is an inherently ridiculous character, but Coogan plays him straight, which makes him about ten times funnier. Pat, too, is played fairly straight by Meaney, which makes the scenes between Alan and Pat play like they're coming from some bizarre, but hilarious, alternate universe where the threat of death of injury is simply part of the atmosphere and nothing to get too hung up on. Though its ambitions are modest, Alan Partridge is a very funny movie which should make new fans of Coogan's long-running character.
Posted by Norma Desmond at 8:00 AM