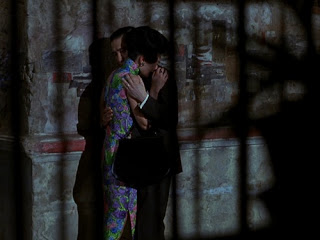 He remembers those vanished years. As though looking through a dusty window pane, the past is something he could see, but not touch. And everything he sees is blurred and indistinct.

The mood may be right for love, but the timing never is in Wong Kar-wai’s masterpiece. It is always too early, or too late; the moment, when it comes, is fleeting and slips away as soon as it appears, so that what lingers is not a memory, but a dream of what might have been in different circumstances – though, had circumstances been different, the moment might never have come at all. A beautiful and incredibly bittersweet love story, In the Mood for Love is a visually glorious movie that floats effortlessly across the screen even as it takes on increasing emotional weight. As directed by Wong, this film is where style and content meet and create something precious and utterly perfect.

Set in Hong Kong in 1962, the film centers on Mr. Chow (Tony Leung) and Mrs. Chan (Maggie Cheung), neighbors who move into their respective apartments on the same day and who find their lives increasingly intertwined. Both are married, but often alone: Chow’s wife frequently works overtime shifts, and Mr. Chan is seemingly always away on business trips. Whenever he goes away, Mr. Chan brings back designer purses for his wife and for others; at the beginning of the film she requests that he bring back two purses for her boss, one which he can give to his wife, the other to his mistress. When asked if he should get the purses in different colors, she shrugs it off; it doesn’t matter, as far as she can see. He takes that “why bother?” attitude to heart, and the pieces are easy to put together when Mrs. Chan and Mrs. Chow both end up with the same purse, which can only be purchased abroad – just like the tie that Mr. Chow and Mr. Chan suddenly have in common.

Having quietly come to terms with the fact that their spouses are having an affair, Mr. Chow and Mrs. Chan develop a friendship which they conduct as clandestinely as they are having the affair (which, of course, they are, in heart if not in body). In long conversations and while taking long walks, they attempt to recreate the way they believe the affair began, Mr. Chow playing the role of Mr. Chan, Mrs. Chan playing the role of Mrs. Chow. Inevitably the two begin to fall in love with each other, though their relationship remains chaste, complicated by the fact that it is developing out of the play-acted version of their spouses’ affair and by the notion that if they were to act on their feelings for each other, they would be “no better” than them. Nevertheless, when Mr. Chow is given the chance to move to Singapore for a job, he asks Mrs. Chan to go with him – but the time has already passed and now, even if they want to seize the opportunity to be together, the road has forked and one will inevitably go down the left path, while the other goes down the right, never quite coming back together.

In the Mood for Love moves slowly and sensually, as Wong lingers on and repeats images for effect, creating a dreamy atmosphere that envelops its would-be lovers. Both characters are tentative, careful to the point of stasis – the conversation in which they feel each other out, trying to determine if the other is also aware of their spouses’ affair, progresses slowly, neither ever quite spelling it out but rather laying out the evidence bit by bit and mutually reading between the lines – but the intimacy that develops between them feels anything but static. For all intents and purposes, they are lovers and they sneak around together as if they’re about to be caught at something and judged accordingly, even missing a day at work when they find themselves trapped in Mr. Chow’s room when his landlord returns to the apartment to host an hours long game of mahjong. They spend much of their time talking about their spouses, but the two figures remain purposely indistinct, their faces always obscured by Wong’s camera, their voices assumed by the leads in a sort of pantomime. Often it isn’t until several beats into a conversation that it becomes clear that Mr. Chow and Mrs. Chan are play acting, developing their own relationship by exploring what they imagine to be the relationship between their spouses. If the story were truly about the affair, this strategy might seem frustratingly opaque, but it’s effective here because it foregrounds the remoteness of the martial relationships and the ever growing intimacy of the relationship between the two leads.

In the Mood for Love is an exceedingly beautiful movie from a filmmaker well known for crafting exquisite images. The film is high on style – true to its title, it’s very much a “mood” piece - but it balances that with incredibly strong character work and Leung and Cheung, each of whom has collaborated with Wong several times, deliver nuanced and moving performances that ensure the film has emotional depth in addition to visual beauty. There are no shortage of great love stories in the history of cinema, but In the Mood for Love is absolutely one of the greatest.
Posted by Norma Desmond at 8:00 AM