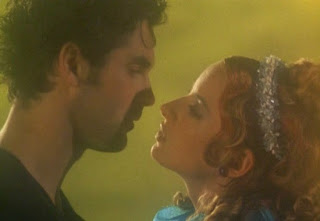 Twilight of the Ice Nymphs is arguably the most important film in Guy Maddin's filmography, not because it's good, but because the difficulties Maddin encountered in making it, and his ultimate disappointment in the final product, put him on a track to make the series of acclaimed films that followed. Before Twilight, Maddin was flirting with the possibility of a move to Hollywood and entering a "director for hire" phase. After Twilight, which is the least "Maddin-like" of his films yet still nowhere near a mainstream Hollywood movie, he would retreat from feature films for several years and then emerge, creatively recharged, to make such films as Dracula: Pages from a Virgin's Diary, Cowards Bend the Knee, The Saddest Music in the World, Brand Upon the Brain! and My Winnipeg. The disillusionment Maddin felt with the process of making Twilight can be felt throughout the film, which has some typical Maddin touches of weirdness but also possesses an odd feeling of disconnect between what's occurring onscreen and the man behind the camera. Still, while Twilight of the Ice Nymphs may be the least of Maddin's features, it's not a film wholly lacking in value.

Loosely based on Knut Hamsun's novel "Pan," Twilight of the Ice Nymphs opens with Peter Glann (played by an uncredited Nigel Whitmey and voiced by Ross McMillan) recently released from jail and making his way back to his home in Mandragora, a place where the sun never sets. En route he meets Julia (Pascale Bussieres) and the two fall into something between love and lust before parting, with Peter carrying on to the family ostrich farm which his sister, Amelia (Shelly Duvall), has been running with the help of hired hand Cain Ball (Frank Gorshin). Amelia is naturally thrilled by Peter's return, but his arrival upsets Cain, as it puts into jeopardy the agreement that he and Amelia had for her to sell him the farm. Escaping the tensions at the farm, Peter goes out hunting and meets Zephyr (Alice Krige) who, despite being married and pregnant, falls in love with Peter and prays to a stone statue of Venus to make Peter fall in love with her. Following her deal with Venus (sealed by her giving her wedding ring to the statue as tribute), Peter finds himself drawn to Zephyr, though in his heart he remains enamored with Julia.

Peter and Julia are brought back into contact with each other when Peter and Amelia go on a picnic and run into Julia in the company of Dr. Solti (R.H. Thomson), a mesmerist with whom Amelia is in love. Julia is the companion of Dr. Solti, who uses his abilities to manipulate and hurt others, including having hypnotized Julia into believing that she was in love with Peter in the first place. When Peter learns what Dr. Solti has done, he attacks him, however, his attack is ineffective as it is against Dr. Solti's artifical leg. Although the atmosphere on Mandragora is never exactly what one would call "normal," it becomes increasingly volatile after the picnic, leading to several acts of violence. Zephyr lures her husband to his death and then gets on the bad side of the Venus statue; Amelia begins to go mad and comes to believe that Cain is trying to kill her, prompting her to take preemptive measures against him; and Peter and Julia are briefly reunited, but his jealousy tears them apart and his subsequent attempt to avenge himself by calling on the spirits of the forest end up wounding nothing but his own pride. No one will escape Mandragora unscathed, the only question is how intact the survivors will be.

In the years since its release, Maddin has been quite open about his disappointment with both the experience of making Twilight and the end results. Funny as the idea is, this film was supposed to be Maddin's crossover into the mainstream and he was given a budget commensurate to those expectations, which in turn brought a great deal of interference from producers seeking to protect their investment. The compromises made to try to make Maddin's typically weird, violent, and psychosexual vision meet the necessities of trying to turn this into a commercial endeavor are obvious, in that Twilight feels like it's constantly on the verge of taking off but is being actively held back. There's something muted and neutered about it as compared to Maddin's other films and it's clear that the director isn't entirely comfortable working on a project of such scale. Another factor which may have contributed to the seeming disconnect between the director and the film is the fact that Twilight is one of only two of his features that Maddin didn't have a hand in writing (the other being the far more successful Dracula: Pages From A Virgin's Diary). The result is a film which feels like Maddin after being filtered through another party, and then filtered through another party after that.

That said, while the film seems to contain too many competing visions and interests to really work, that's not to say that there's nothing of value in Twilight of the Ice Nymphs. Per usual, Maddin creates some incredibly striking images through use of a deliberate (even affectionate) artificiality, including a scene in which Peter spends the night with Zephyr while the bed slowly becomes submerged in water, and the climactic scene where Peter attempts to connect with and control the spirits of the forest, and the performances by Duvall and Gorshin are quite strong and even sometimes moving. The rest of the cast doesn't fare quite as well, but they also don't have the benefit of getting to play the flat out insanity that is often Maddin's strong suit. While Duvall and Gorshin get to go straight to that over-the-top, stylized place where most of Maddin's films and characters live, the rest are stuck in between high melodrama and flat out craziness and stumble a bit in their efforts to make it work.

A lot about Twilight of the Ice Nymphs just never clicks into place but, at the same time, I'm reluctant to call it a bad film. It fails at what it sets out to do, but it's such an interesting failure that I would recommend it - to Maddin fans, at least. If you've ever wondered what the intersection between Maddin and the mainstream looks like, or if you simply want to have a renewed appreciation for the genius that he's capable of when he's working at his comfort level, then check out Twilight of the Ice Nymphs.
Posted by Norma Desmond at 8:00 AM